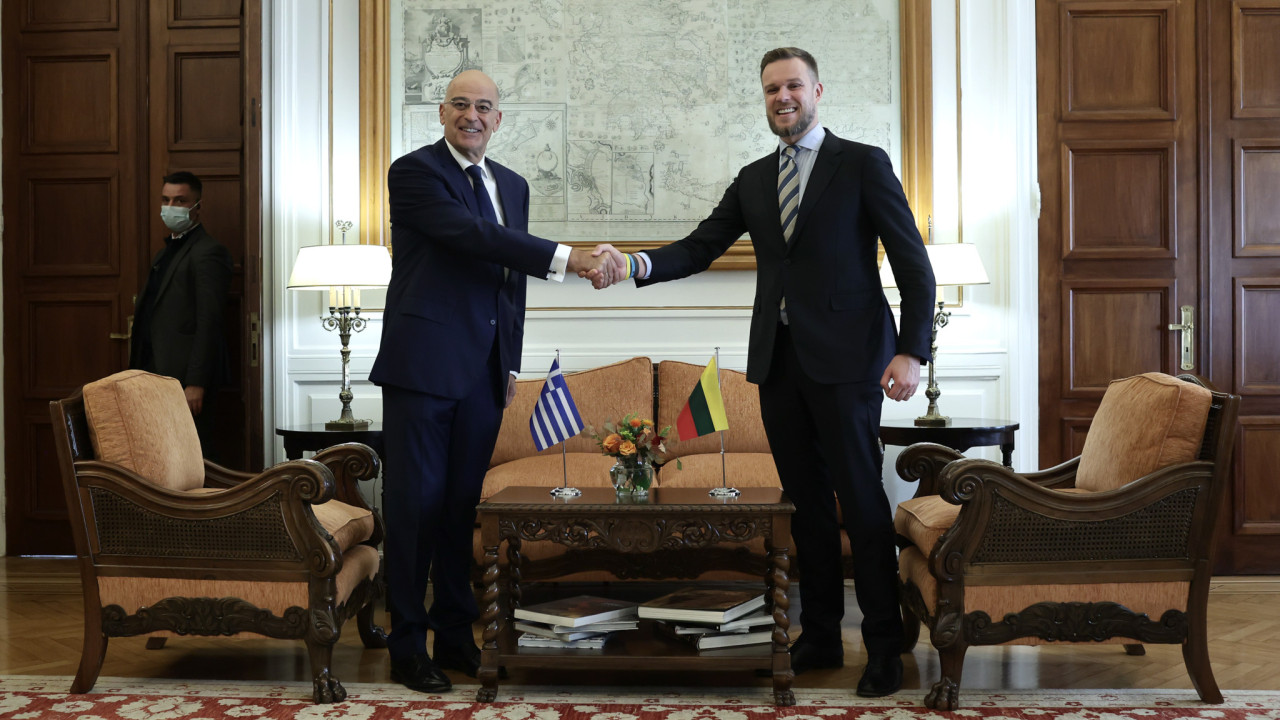 Dendia’s message: We must stand against every revisionist ideology

Meeting of the foreign minister with his Lithuanian counterpart, whom he informed about the developments in the Eastern Mediterranean and the illegal Turkish-Libyan memorandum – “We have a neighbor who has issued a threat of war against our country”, he underlined

“We must stand against any revisionist ideology that wants to destroy the order of things that the EU defends,” the foreign minister underlined Nikos Dendias, after his meeting with the Lithuanian foreign minister Gabrielius Landsberg (Gabrielius Landsbergis). During the meeting, Mr. Dendias informed him about the developments in the Eastern Mediterranean and about the illegal and non-existent “memorandum of cooperation” between the government of Tripoli and Turkey.

Despite their geographical distance, Greece and Lithuania share many common elements, noted Mr. Dendias, as both countries are located on the periphery of the European Union and face common challenges and common problems. “A huge challenge for both is Russia’s invasion of Ukraine,” he said. “A flagrant violation of the independence, sovereignty and territorial integrity of this country and the United Nations Charter.”

Mr. Dendias informed his counterpart for his visit to Kyiv, from where he returned this morning. “I lived – for a very short time – the situation in which the Ukrainians live because of the bombings”, he said and recalled that his meeting with his Ukrainian counterpart Dmytro Kuleba took place in the shelter of the Ministry of Foreign Affairs.

“I assured him that all European countries will continue to work together to support Ukraine, that is, to defend International Law and the Principles of the UN Charter, as well as to jointly confront revisionism,” he noted and added:

“A narrative that both Lithuania and Greece have faced in their history. They have been confronted with policies like the one the Kremlin is now implementing in Ukraine.” Mr. Dendias repeated what he emphasized yesterday in Kyiv, that Greek society faces similar challenges, “because Greece also has a large and powerful neighbor to the east. A neighbor who has issued a threat of war, a casus belli expressly against our country.”

“Greek society can easily understand a people who are fighting for their independence and territorial sovereignty,” he said. During the meeting, the question of the instrumentalization of migration, a threat that, as Mr. Dendias recalled, was faced by both countries, was also discussed, as well as the protection of the external borders of the European Union.

Regarding the issue of energy security, Mr. Dendias pointed out that Greece shares Lithuania’s concerns about the nuclear power plant in Astravyets, Belarus, as it is only 50 kilometers from Vilnius.

“We have similar concerns regarding the construction of the nuclear power plant with Russian technology in Akuyu, Turkey, in an earthquake-prone area,” he noted.

“The Greek government considers Lithuania as a useful and critical partner, in our effort for the mutual defense of international legitimacy, with a solid foundation, common principles and values, on which our common home, the European Union, has been built.” pointed out. “These principles are expressed by International Law, especially the International Law of the Sea, in respect for the sovereignty, independence and territorial integrity of all countries of the world.”

He also thanked his counterpart for Lithuania’s participation in UNFICYP, the peacekeeping force in Cyprus. Finally, he recalled that on the occasion of the 100-year anniversary of the establishment of diplomatic relations, the President of the Republic visited Lithuania last June, while Prime Minister Kyriakos Mitsotakis will visit it very soon.

Lithuanian Foreign Minister: Lithuania has a strategic interest in a stable and secure environment in the Southern Mediterranean

“Lithuania has a strategic interest in a stable and secure environment in the Southern Mediterranean”, underlined the Lithuanian Foreign Minister Gabrielius Landsberg. He said that Lithuania and Greece are close allies in safeguarding democracy and order against rules.

“Last year the Greeks celebrated 200 years since the Greek Revolution, which was a source of inspiration for Lithuania.” He pointed out that Greece is a favorite destination of Lithuanians for tourism and he himself has visited Greece many times as a tourist, but he emphasized that there is room for further strengthening of the economic relations between the two countries.

“Europe has been shaken by the brutal war unleashed by Russia,” he noted and added: “For the Greeks, Mariupol is not only a city on the map of Ukraine, but a tragic symbol of brutality. The Greek community has suffered tragic losses. especially from the brutal Russian brutality.’

“We should stand united and support in all possible ways the people of Ukraine in their struggle for freedom,” he emphasized. “For decades there was a false impression in the West that we could not have a security structure without strong relations with Russia. But this year Europe learned a hard lesson of the disastrous consequences of this energy dependence.”

He also noted that international sanctions have many and tangible consequences and now is the time to speed up and expand sanctions, not reduce them. A resounding message should still be sent to Iran, he pointed out and emphasized that “the strengthening of Russia’s war effort cannot go unnoticed, as well as any attempt by authoritarian regimes that will follow in Russia’s footsteps and try to destabilize the global rules ».

He underlined the need to find a common way to deal with the energy crisis in Europe. Finally, referring to immigration, he pointed out that the borders of Greece and Lithuania “are the external borders of the EU and we face very serious immigration pressures.

“We greatly appreciate Greece’s support during the hybrid attack we received from the Lukashenko regime, which tried to instrumentalize immigration,” he added.

Facebook
Twitter
Pinterest
WhatsApp
Previous article
EUR/USD: Powerful technical barriers
Next article
Hodgkin’s lymphomas. What are the symptoms, the prognosis and what should patients do to improve their quality of life?