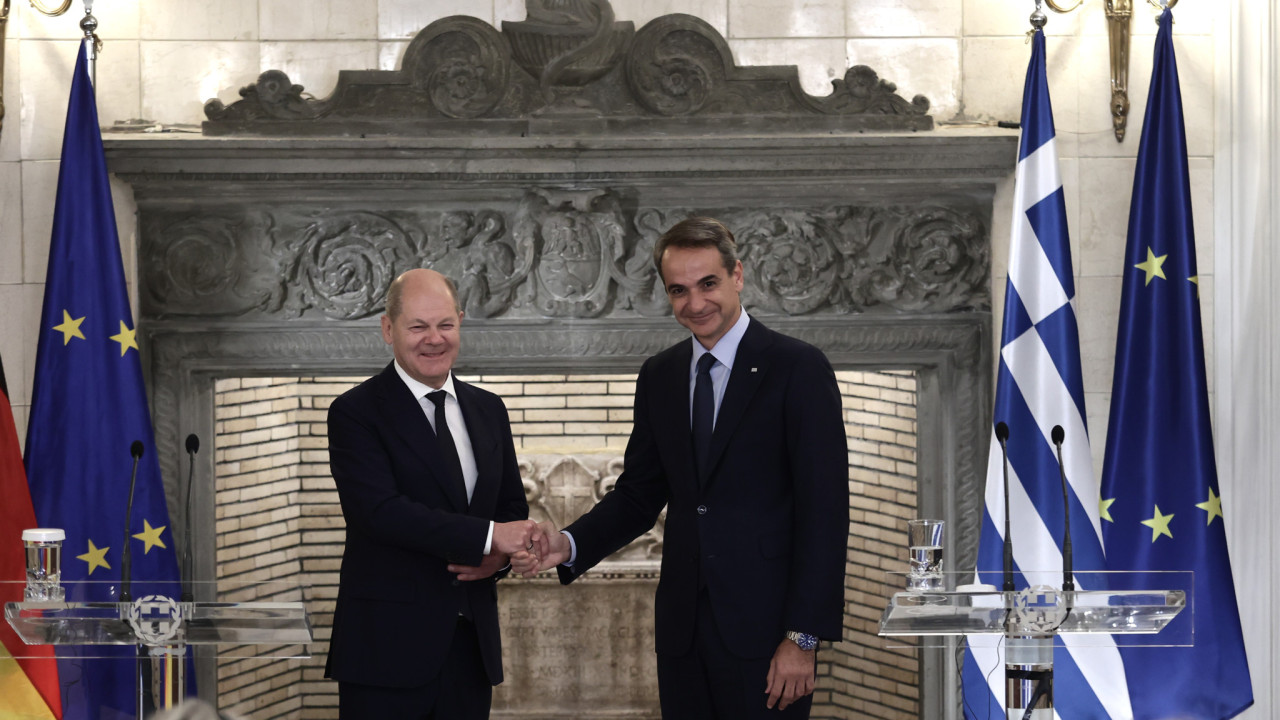 Mitsotakis-Soltz: Everything that was said in the four-four between the two men about Turkey, energy, economy

Kyriakos Mitsotakis informed the German Chancellor about the positive performance of the Greek economy and about the reforms that the government has promoted, which have allowed it to combine growth with the tax reduction policy, without undermining fiscal stability.

Overview of the excellent level of relations between Greece and Germany in a series of sectors, Prime Minister Kyriakos Mitsotakis and German Chancellor Olaf Scholz made during their meeting, at the same time emphasizing their will to further strengthen them.

Kyriakos Mitsotakis informed the German Chancellor about the positive performance of the Greek economy and for the reforms that the government has promoted, which have allowed it to combine growth with tax reduction policy, without undermining fiscal stability. He also spoke about the upward trend of Greek tourism and about our country’s strategy to maintain the season throughout the year.

They even discussed him war in Ukraine and the need to coordinate actions at the European level to support it.

The two leaders exchanged views on the implications of the Russian invasion of Ukraine on energy prices and energy security and for the need for European solutions for the relief of households and businesses, on the occasion of the decisions of the last European Council.

Kyriakos Mitsotakis informed Mr. Scholz for the infrastructure that Greece is developingwhich turn it into a critical hub for the energy security of Southeast Europe, but also a model of regional cooperation.

The Prime Minister informed Mr. Scholz for Turkey’s aggressive rhetoric and provocative behavior and reiterated that Greece is firmly in favor of maintaining open channels of communication and understanding, but on the basis of International Law and good neighborly relations.

Kyriakos Mitsotakis also informed the Chancellor of Germany about the latest developments regarding his invalid and non-existent character Turkish-Libyan memorandum which undermines stability and security in the Eastern Mediterranean.

The two leaders also discussed the current developments in the Western Balkans and the need to promote the European path of the countries of the region and through the Berlin Process, in the next Summit, in which Kyriakos Mitsotakis will participate, on November 3.

His European challenge was also discussed immigration issue, which requires a common European policy and support from frontline countries.

Facebook
Twitter
Pinterest
WhatsApp
Previous article
Lula says that Minister of Economy will have to have fiscal and social responsibility
Next article
OHE: The planet is facing a temperature increase of 2.8 degrees Celsius