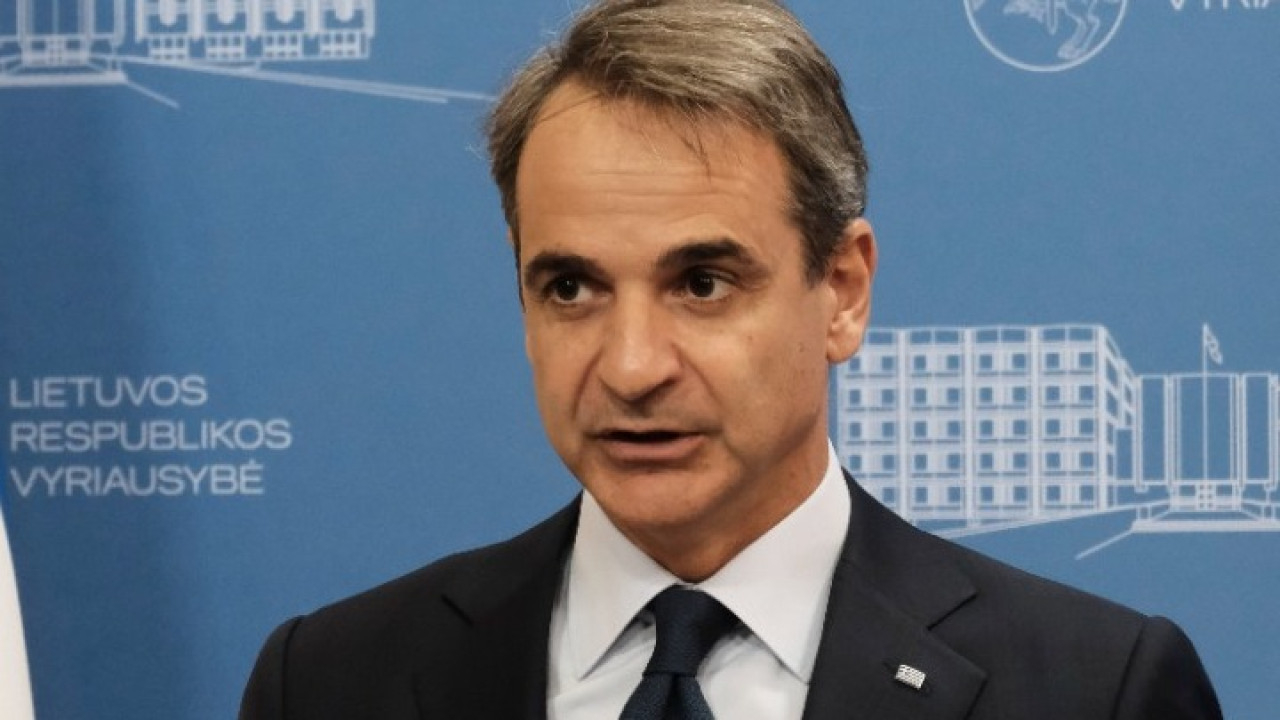 Mitsotakis: We need a European solution as soon as possible on the issue of the energy crisis

Until we manage to find a European solution, it will still be very difficult for member states to continue to support their citizens, households and businesses through national budgets, the prime minister said in an interview on the Lithuanian state channel

“We need a European solution as soon as possible,” said Kyriakos Mitsotakis on the subject of the energy crisis in an interview on the state television channel LRT of Lithuania.

“I am glad that at the last European Council there was an agreement among my colleagues that we must task our ministers to come up with a single European solution that will also include a cap on the TTF index for the wholesale gas market, in order to avoid excessive increases in the price of natural gas,” the Prime Minister stressed and noted: “This it would be a radical solution that would help all European countries to reduce energy costs. In the meantime, like most European countries, and Lithuania, we have supported businesses and households, taxed the surplus profits of energy producers and used this revenue to support the citizens of our country. And of course, we also contribute from the national budget to keep energy prices at reasonable levels.

But I want to be very clear: until we manage to find a European solution, it will remain very difficult for Member States to continue to support their citizens, households and businesses through national budgets. Therefore, we need a European solution as soon as possible.”

Mr. Mitsotakis also mentioned that Greece, like many other European countries, is quite dependent on natural gas, in our case, for the production of electricity. “And we have all faced great difficulties because of Putin’s instrumentalization of natural gas. And we have argued that we need to address the root cause of inflation, which is very high gas prices, with an intervention at the European level,” he pointed out.

The Prime Minister also stated that the relations between Greece and Lithuania can be significantly improved and that the two countries cooperate very closely in the European Council.

“Lithuania has been a very ardent supporter of the Greek initiative for a European intervention to control natural gas prices’Mr. Mitsotakis emphasized, noting that the two countries also cooperate on immigration, while there is an identification of positions on important foreign policy issues, significant dynamics for the improvement of economic relations, trade, and investments from both sides.

“Greece emerges much stronger from a very prolonged economic crisis. Our economy is growing at a higher rate than the eurozone average. The foreign direct investment we are attracting to the country is at record levels. Therefore, it is also important for your audience, for Lithuanians, for Lithuanian companies that may be interested in investing in Greece, to understand that the Greece of 2022 has nothing to do with the Greece of the financial crisis of the second decade of the 21st century. We have made significant progress and I think we can further strengthen the economic ties between our two countries, for the benefit of both our peoples,” the prime minister continued.

Asked about the war in Ukraine and what could stop it Vladimir PutinKyriakos Mitsotakis said that Greece and Lithuania, as well as the rest of the European family, are united in condemning this war of aggression, “the completely unnecessary, unprovoked attack launched by Putin in Ukraine”.

He noted that in general, the European response was very well coordinated and quite dynamic.

“As you know, we have implemented eight sets of sanctions against Russia, and I am convinced that these sanctions are beginning to have a significant impact on the Russian economy. At the same time, we continue to support the Ukrainian government, not only financially, but also through military support. This is what Greece chose to do from the first moment the war began, and we will continue to do so until Ukraine can be strengthened so that it is not in a position of weakness. In this light, no one should question the commitment of European countries to stand by Ukraine, supporting it against Russia,” he added.

Referred to to what happened in Mariupoli he said that we were shocked that the city has been on the front line of this war since its inception. “Not many people know this, but – as you pointed out – we have in Ukraine a strong community of Greek origin that lives in the area around Mariupol. Unfortunately we don’t have good enough information to be able to know exactly what happened in the community. We know that people lost their lives and for this reason Greece has committed that when the time comes and hopefully when this war ends, we want to play an active role in the reconstruction of Mariupol. We have this city in our hearts. “Unfortunately, it was destroyed by the heinous attack launched by Putin against Ukraine,” he added.

Answering a question about immigration he reminded that in March 2020 Turkey instrumentalized migrants and tried to aggressively push them towards the European Union.

During that time, Greece defended our European borders and pointed out that no foreign country should use migrants as a geopolitical weapon. Human suffering and human pain should not be instrumentalized. And we stood by Lithuania when Belarus tried to do the same to your country”, stressed Mr. Mitsotakis.

He added: “I believe it is imperative to come up with a common European response to these tactics, with the aim of preventing a repeat of the migration crisis of the past. Of course, at the same time, Europe has opened its doors to refugees from Ukraine, as it should have done. About 60,000 to 70,000 Ukrainians came to Greece, whom we took care of and, hopefully, at some point, hopefully soon, they will be able to return to their homes.”

After a related question, Mr. Mitsotakis he said Turkey implemented these practices before Lukashenko copied them and attempt to do the same against Lithuania.

“We have made it very clear to Turkey that we need to work together to deal with this problem. Turkey currently hosts more than 4 million refugees and migrants. It has signed an agreement with the European Union since 2016. And it is obliged based on this agreement to do everything it can to stop the illegal movement of people from Turkey to Greece. We have abundant evidence that this is not the case and that, if anything, Turkey is actively encouraging and promoting immigrants and refugees to Greece. Therefore, we again call on Turkey to cooperate with Greece, to cooperate with Europe to deal with this problem. It is very sad when we see people in very small inflatable boats in the sea. The Hellenic Coast Guard is always ready to rescue them and has saved thousands of people at sea. But these people are leaving Turkish shores and I am sure that Turkey can do much more to prevent traffickers from profiting from this human suffering.”

He also emphasized that Greece and Lithuania have an obligation to defend their borders. “Defending our borders does not mean that we do not respect fundamental rights. As I told you, we have saved thousands of people at sea, but we also have an obligation to do our best to ensure that people do not enter our countries illegally. At the same time, I must point out that Greece was able to grant asylum to tens of thousands of people who were supposed to come to Greece.

We managed to build completely new infrastructure, human facilities, to welcome those who manage to reach the Greek islands. We solved the problem of unaccompanied minors. They are perhaps the most sensitive of all the refugees who ended up in Greece. So I think we have a policy that is very clear about our desire to protect our borders while at the same time protecting fundamental rights. We cannot imagine a free movement zone that encourages the free movement of people, a Schengen zone, without protecting our external borders.

If we do not protect our external borders, the Schengen area will eventually collapse. Therefore, I consider that we are following the right policy, and it is a policy – I must point out – that is supported by the vast majority of the member states in the European Council”, underlined the prime minister.