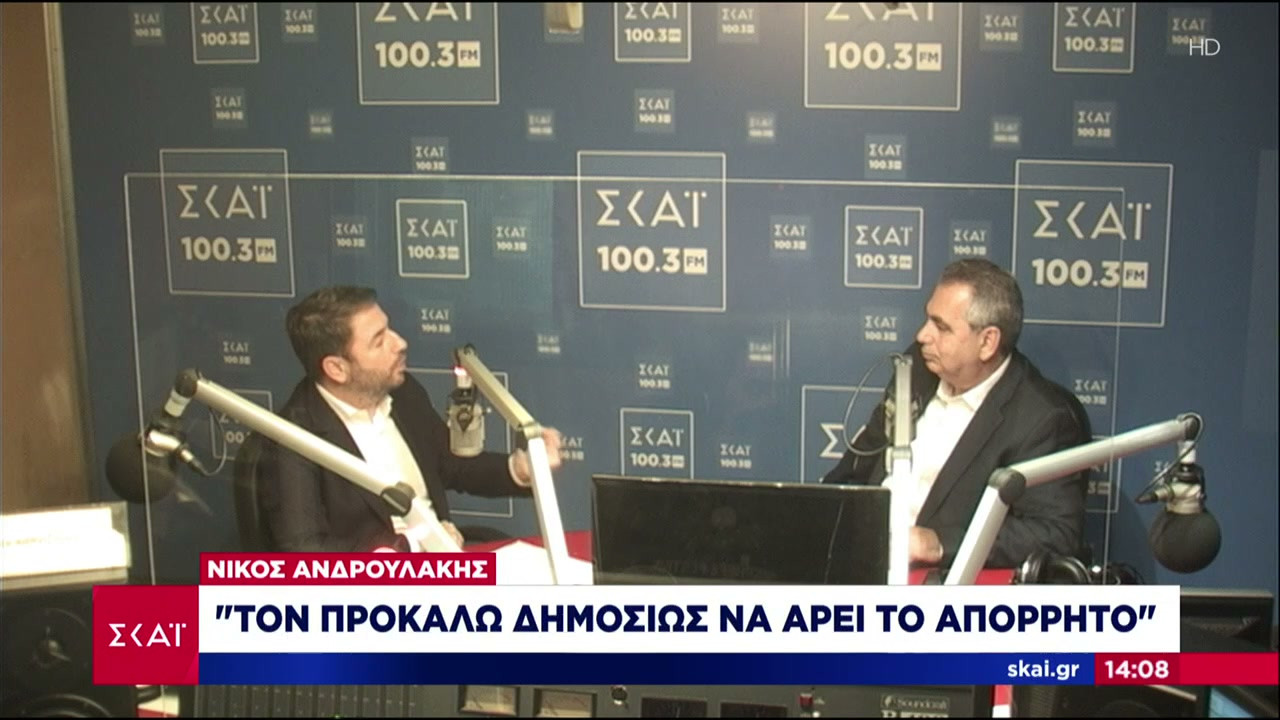 Androulakis on SKAI 100.3: I challenge the prime minister to lift the secrecy of surveillance

The president of PASOK – KINAL, Nikos Androulakis, called on the prime minister, through SKAI, to lift the secrecy about the monitoring of the EYP, so that the Greek people can learn the whole truth about the case.

At the same time, he proposed the creation of a service that would check the cellphones of those involved in the recent reports, to find out if they were finally victims of the Predator or not.

“I expect the Greek Judiciary to do the obvious three months later and call all the involved bodies” he said characteristically.

“One penalty was enough for the Prime Minister to come out publicly and say for the first time that there is a Predator monitoring center, in GREECE. With an offside, next Sunday he can tell us who is managing it” he said.

He addressed an appeal to anyone who thinks he has been a victim of surveillance of his personal life, to follow the path of institutions, transparency and Justice.

Asked if it turns out that politicians, journalists and other persons were monitored, if he believes it was done on the orders of the prime minister, Mr. Androulakis referred to the prime minister’s decision to change the legislation to put a person of his absolute trust in the Ministry of Foreign Affairs.

He accused the government that “for three months, the managers of the two companies involved (Intellexa and KRIKEL) remain untouched”.

When asked if he intends to discuss with his political opponents until the elections, he said that if the percentages are such that Mr. Mitsotakis and Tsipras do not have the role they had until now, he himself intends to discuss anything that can help the Greece to change the page.

Regarding the announcement of the start of seismic surveys west of the Peloponnese and south of Crete, to find natural gas deposits, he stated that he agrees, however he commented that they were announced late.

“You cannot say ‘I will make a green transition’ and instead of starting research for your own hydrocarbons, tie the country to an imported fuel such as natural gas,” he said.

Asked about the proposal to extend the 12 miles south of Crete, he pointed out the need to convene a council of political leaders, so that whatever decisions are made, they are made consciously and together.

On the issues of the economy and energy, Mr. Androulakis stated that the accuracy is due in part to the Russian invasion of Ukraine but also due in large part to the wrong government manipulations.

Regarding the household basket, he mentioned that although he voted for it in the Parliament, it eventually became a means of de-plastering.