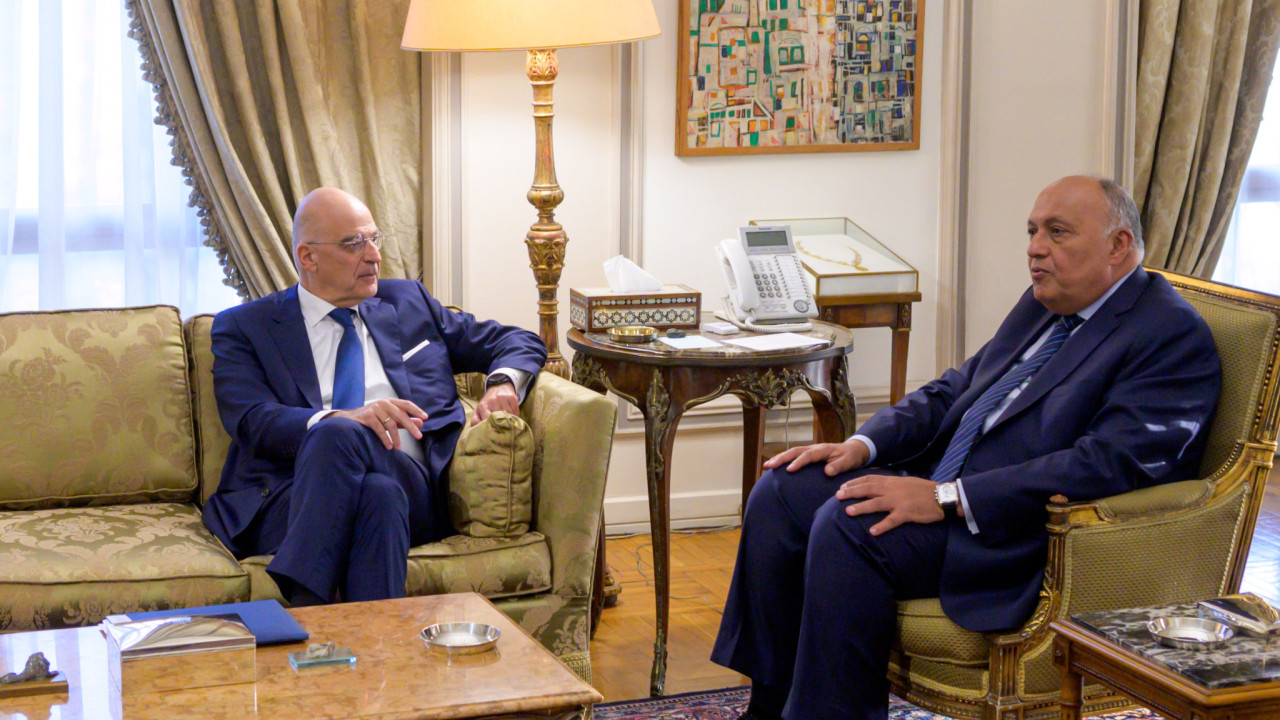 Dendia’s message from Cairo: We are not trying to encroach on the sovereignty of third countries, unlike others

Our actions are based on international rules, explains Nikos Dendias after signing the memorandum of understanding with Egypt

With the memorandum of understanding in the fields of aeronautical and maritime search and rescue, Greece and Egypt send a clear message: Our operations are based on international rules. We never in any way try to encroach on the sovereignty or sovereign rights of other states, unlike others in the region, the foreign minister stressed Nikos Dendiasafter his meeting with Sameh Shoukry’s Egyptian counterpart in Cairo.

Highlighting the importance of the agreement in the fields of aeronautical and naval search and rescue, which was signed earlier at the Egyptian Ministry of Defense by the defense ministers of the two countries, Nikos Dendias underlined that is based on full respect for International Law and is in full agreement with the provisions of the International Civil Aviation Organization (ICAO). In fact, he determined that the goal of Greece and Egypt with this agreement is to create a cooperation framework that will contribute to saving precious human lives.

Likewise, the Minister of Foreign Affairs announced that Greece and Egypt contribute, through their exemplary bilateral ties, in promoting stability and security in the Mediterranean and function as connecting bridge between the governments and peoples of Europe and Africa. He also pointed out that this agreement is primarily about saving human lives and working together on how to achieve this – and how it demonstrates that, in the spirit of cooperation and mutual understanding, many agreements can be signed and many agreements can be created chances. “It is clear that countries that work together and have the same reading of the situation, can create a better understanding of what needs to be done to protect the lives of citizens, but also the lives of other people, who are either flying over the Mediterranean, whether they sail in the Mediterranean” he explained.

During their meeting, the two foreign ministers discussed the regional developments, as well as the very fragile situation in Libya, with N. Dendias informing S. Soukri about his recent visit to Libya. “And we both agreed that we look forward to working with an elected and representative government of Libya,” emphasized N. Dendias.

In addition, the Greek minister informed his Egyptian counterpart about the continuation of Turkish provocative statements and actions. “Unfortunately, there have been no positive developments on this front since our last meeting,” noted N. Dendias.

At the beginning of his remarks, the foreign minister, after mentioning that only a month has passed since his last visit to Cairo, noted that what matters most is not the frequency of their meetings, but the strategic cooperation they have managed to build between the two countries, “which emerges, both during their discussions, but mainly through the signing of two very important agreements”.

At the same time, he made special reference to the “important agreement” between the two countries, as he described it, for the employment of seasonal workers in the agricultural sector, which was signed by the Deputy Minister of Foreign Affairs, Miltiadis Varvitsiotis and his Egyptian counterpart for European Affairs, Ihab Nasr , in the presence of the foreign ministers of the two countries. “This agreement is of key importance for the promotion of economic cooperation between Greece and Egypt, in a very important sector, agriculture,” the Foreign Minister stressed, adding that it promotes legal immigration. In this context, N. Dendias expressed our country’s deep appreciation for Egypt’s continuous efforts to deal with irregular immigration. Egypt’s contribution should be recognized, not only by Greece, but also by the European Union as a whole, he suggested.

Addressing his Egyptian counterpart, he underlined that today’s two agreements between Greece and Egypt “come to be added to another important agreement that we signed together two years ago, in the same building, for the delimitation of our Exclusive Economic Zones”. This agreement, he continued, is a model for how countries wishing to co-exist in a mutually beneficial environment should cooperate, respecting the principles of International Law and International Law of the Sea, enshrined in the Charter of the United Nations.

In addition, he highlighted the importance of the Europe-Africa interconnector pipeline, which will transport electricity from Africa to Europe. “We look forward to strengthening this cooperation in other sectors as well, including energy and renewable energy sources,” said N. Dendias.

Finally, he did not fail to congratulate Egypt for the results of the COP27 Climate Conference, which he presided over for 20 days. He made special mention of the “Losses and Damages” Fund for vulnerable countries. It is significant progress, and it is something that Egypt and the Egyptian Foreign Minister will leave as a legacy for future generations, he said.