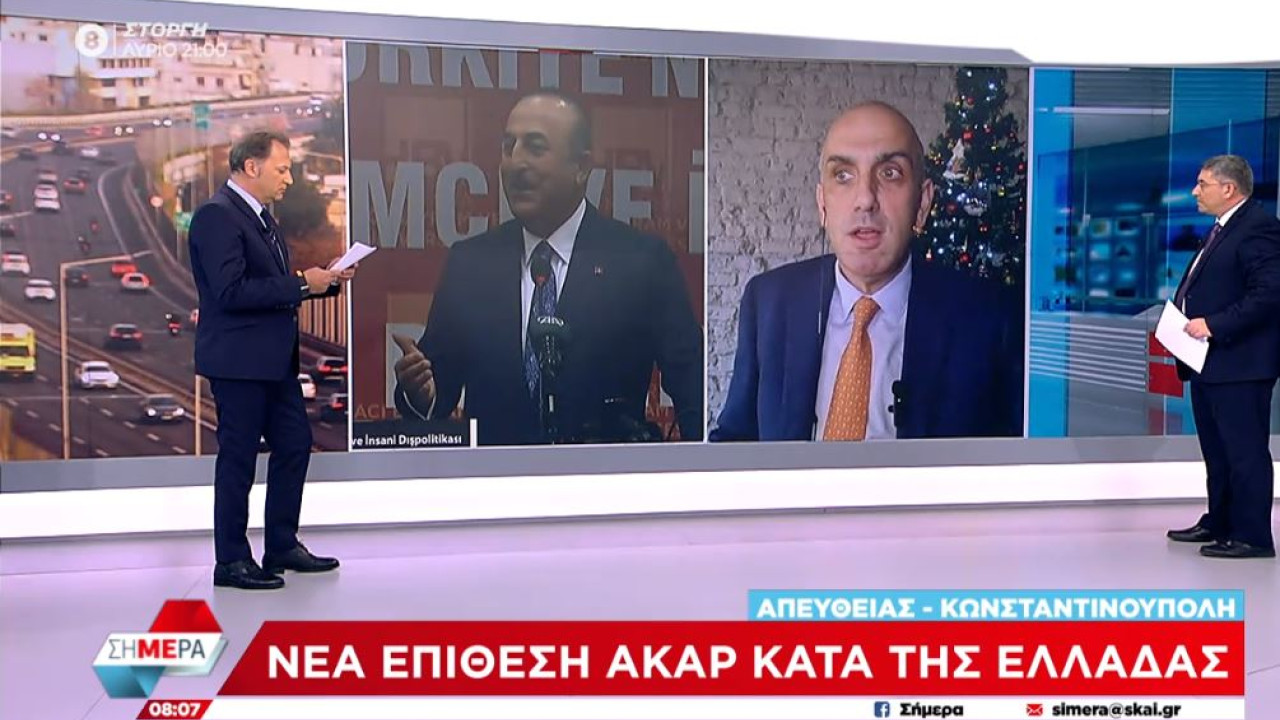 Akar claimed that Greece is not engaging in dialogue and that it is being “seduced by others”.

A new attack against Greece was launched by the Turkish Minister of Defense, Hulusi Akar, this time through the Turkish newspaper Hurriyet.

Asked by the newspaper about Greek-Turkish relations, he claimed on the one hand that Greece does not engage in dialogue, on the other hand he said that in Greece there are some politicians and soldiers who are sleeping. “They need to wake up,” he said, “and see the truths and behave accordingly.”

“To claim our rights is not a threat, to talk about dialogue is not a weakness” he added and called on Greece not to be led astray by others and to “step on the ground”.

As SKAI’s correspondent in Istanbul, Manolis Kostidis, commented, Akar presents Turkey as a country that wants dialogue, however the issues he puts on the table, such as the islands, are non-negotiable for Greece.

Yesterday the Minister of Foreign Affairs Mevlut Cavusoglu he repeated the demilitarization of the islands, otherwise – as he said – their sovereignty is disputed.

The Turkish media followed Cavusoglu’s line, claiming that “the Greek islands have been militarized and are a danger to Turkey.”

In fact, the Turkish media report that “in 1919 the Greeks came to Smyrna from Lesvos, Chios and Samos”.

University professor retired Lt. Gen. Ozgyur Or said: “If we look at this map here, it doesn’t have to be a military analyst who is aggressive and who tries to solve the issues in a military way. When our technicians tried to show the locations of the equipment on the islands there was no empty space left on the map and it was all filled up. Thus, the Aegean cannot become a sea of ​​peace.”

Haber Global anchor Sagnior Tezel said: “But the reason for their demilitarization is specific. Atatürk (Kemal) insisted that they be de-initiated, because on May 15, 1919, at the landing of Smyrna, they came from those three islands. From Lesvos, Chios and Samos”.

“We want the F-16s without restrictions,” Mevlut Cavusoglu said yesterday, as there is concern in Ankara about what will happen in Congress.

The Turkish foreign minister said: “In our president’s recent conversation with Biden in Bali, Mr. Biden expressed the administration’s full support for the F-16 issue. Of course, the role of Congress is important here. So the Congress should also have a positive role in this matter.

We expect this issue to be resolved as soon as possible. This bill must also be passed to buy the F-16s and their modernization as a process must be completed. This is for everyone’s benefit. We have said it before that there is no point in buying them conditional.”

Protest by sailors about the armaments of Greece

“The Greeks are receiving Rafale and will also receive F-35 and we are being delayed by the F-16” is the comment of analysts.

Yeditepe University professor Furkan Kaya said: “They are trying to put a brake on the use of fighters against Greece, there was something like that in the text. But this cannot happen, as they installed weapons systems in Lesbos and Chios, gave Greece Rafale and are also preparing the F-35. The Greek head of the Armed Forces makes statements against Turkey. So we won’t be able to use the fighters? There are no such relationships. Are they trying to intervene in the Aegean and lead Greece to war with Turkey?”

Minister of Energy: “Every area of ​​the Blue Homeland is a mission area for investigations”

“We will conduct investigations in all areas of our jurisdiction,” Turkish Energy Minister Fatih Domez said yesterday, adding that “every area of ​​the Blue Homeland is a mission area for investigations.”

At the same time, the progress of Libya against Greece brought satisfaction to Turkey.

Domez said: “There’s something we’ve been saying from the beginning: We’re going to keep going until we find it. In the end we hope to find it, if it exists. Therefore, we will continue these operations in our areas of jurisdiction in the Mediterranean. Initially, we focused our attention on the Black Sea. We consider every area of ​​the ‘Blue Homeland’ as a mission area for us. First, we conduct seismic surveys. Then we continue with drilling. We hope that with God’s will, we will make a good discovery in the Mediterranean, as well as in the Black Sea.”

Facebook
Twitter
Pinterest
WhatsApp
Previous article
Volos: Investigation of the anti-vaccination doctor who gave vitamin “cocktails” for Covid
Next article
Thessaloniki: The 16-year-old is in critical condition – What did the forensic examination show