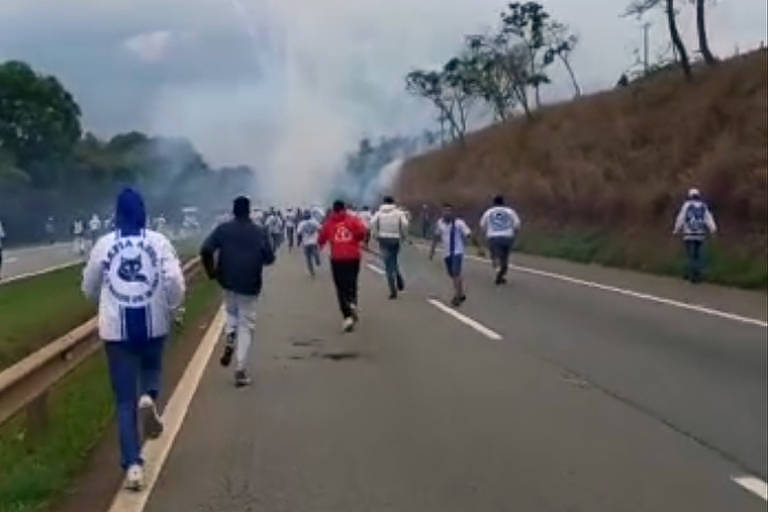 At least four fans were shot after a fight between organized supporters on Wednesday morning (28), on the Fernão Dias highway, in the Cosmópolis region, in Minas Gerais, according to the PRF (Federal Highway Police).

According to the corporation, agents were called to intervene in a fight between the organized Mancha AlviVerde, from Palmeiras, and Mafia Azul, from Cruzeiro. The incident occurred at km 592 of the BR-381.

The four injured, added the PRF, were taken to hospitals in the region. Their health status had not been reported until the publication of this report. There are also others wounded, by sticks and iron bars.

The highway police follow the case, which is still in progress, and would forward more information later in the afternoon. The Minas Gerais Military Police also supports the action.

Arteris, responsible for the administration of the Fernão Dias highway, stated that it recorded the fight between fans at around 10:30 am, heading towards Belo Horizonte.

To ensure the safety of drivers, the stretch was completely closed, with support from the PRF, generating 3.5 kilometers of congestion. The lane was cleared around 12pm and traffic normalized about half an hour later, the concessionaire added.

In other images, the president of the São Paulo organization appears walking with difficulty, when he is knocked down with a flying machine, launched by a man wearing clothes from the Minas Gerais organization. In the images it is possible to see members of the Blue Mafia holding sticks, iron bars and even a machete.

Also on social media, the Blue Mafia said that an “unfortunate fact” had occurred in which it had to “act in self-defense” in order to “defend the integrity of all [torcedores]” who were heading to Campinas, where Cruzeiro faces, on Wednesday night, Ponte Preta, for the Brazilian championship of the series B.

No spokesperson for the organized supporters had been located and no official position forwarded by them, until the publication of this report.

Facebook
Twitter
Pinterest
WhatsApp
Previous article
Iran: Statement by President Raishi today amid bloody protests over Makhsa Amini
Next article
If I didn’t pull out a gun, he would have hit me, says the Policewoman who shot a 30-year-old man in Polytechnic University