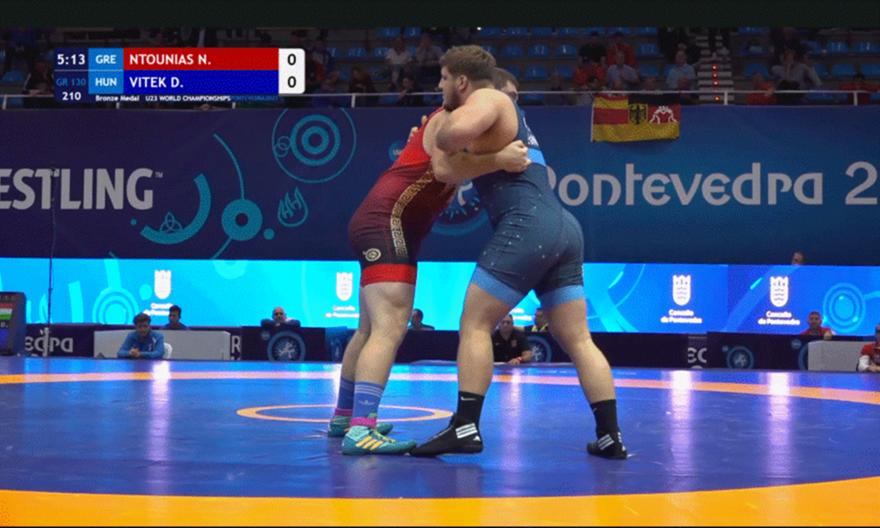 Dunias is fifth in the World Wrestling U23

Nikos Dounias showed at the K23 World Wrestling Championship held in Pontevedra his enormous potential and completed a very great effort, which brought him to fifth place in the 130 kg Greco-Roman category.

Dunias began his efforts on Monday. Initially, he was surprised by Turkey’s Fatih Bozkurt, who eventually won the gold medal. On Tuesday, he returned to the repechage match, where he won 13-11 against the Czech Marcel Albini, winning the “ticket” for the “small” final.

There, he met Hungary’s Dariusz-Attila Vitek, who has a European Championship gold medal and third place in the men’s category to show for it. The Hungarian dominated from the start and cruised to victory, with Dounia, who still has two years left in his age group, finishing fifth.

Giorgos Sotiriadis did not make it in the round of 16 of the World Championship and was defeated 5-2 by Puklavets at 72 kg. The Croatian champion entered the match better and, despite a commendable reaction from Sotiriadis, won the match.

Initially, Sotiriadis, without facing any problem, prevailed with the technical superiority of Garcia from Guatemala. His effort will continue on Wednesday, as he will face Japan’s Daigo Kobayashi in the repechage. If he wins, he will play for the bronze medal with India’s Vikas Vikas.

Meanwhile, the progress of Ilias Pagalidis and Apostolis Tsiovolos was stopped in the quarterfinals. Tsiovolos at 97 kg faced the Brazilian Alves and, in a very balanced game, he was defeated 3-1.

At 82 kg, Ilias Pagalidis faced the Swede Algren and was defeated 5-3. Pagalidis started the day with a 2-1 win against Armenios Hakobyan, before easily defeating Spain’s Estevez Marin.

Facebook
Twitter
Pinterest
WhatsApp
Previous article
#Hashtag: Iza declares to be demisexual, and internet discusses the term
Next article
Schinas: After the pandemic and in the middle of the war, the Europe of health is more necessary than ever