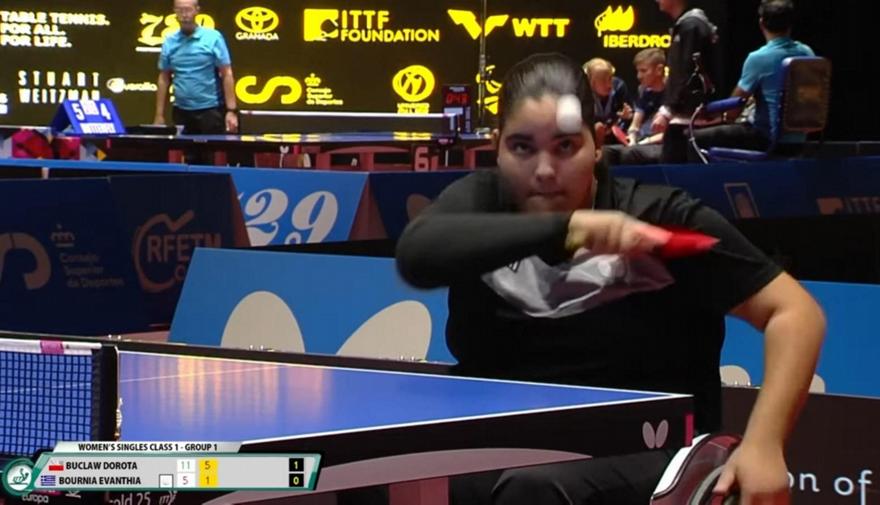 Chasers 4th in the World Championship A.Me.A. Bournia – Mukhtis was eliminated in the round of 16

On Wednesday 09/11, the duo, representing the Greek table tennis, started their matches at the World Championship for people with disabilities, in Granada, Spain. Evanthia-Irini Bournia in class 1 (wheelchair athletes) and Giorgos Mouchthis in class 6 (standing) suffered defeats, which formed a different situation based on the system of conduct.

Our 16-year-old champion takes part in the 1st group. He lost in the opening match, but on Thursday 10/11 he can take 2nd place with a win and go to the semi-finals of the top competition.

Instead, our 28-year-old champion was left straight out of contention. In his own category, the knockout system is immediately applied and he was eliminated with difficulty in the round of 16. He was coached by his personal coach Milan Ignatovic, while the technical guidance of Bournia is Eleftheria Daundakis.

The men’s class 6 started with 18 entries. It became a board of “32” with Mukhtis (number 15 in the November world ranking) advancing without a match to the 2nd round. There he faced the British Martin Perry (No. 11), with whom he has given strong encounters in other international tournaments. In a very close match, our champion with the two combina-rubbers (the so-called “teeth”) suffered a 3-1 set defeat and did not advance to the quarterfinals.

The women’s call 1 has just 6 athletes and Wednesday featured the first two heats of the groups. In the 1st, Bournia (number 3 in the world ranking of the category) could not resist the superiority of the leader Dorota Buclav and lost 3-0 sets (5-11, 5-11, 4-11). The athlete from Poland is at the top of the international ranking list and also on Wednesday she was imposed with the same score as Mariam Almirisl from Saudi Arabia, already securing the first place in the group.

On Thursday at 13:15 Greek time, our young international faces Almirisl (No. 8) in the final of the 1st group. She is ready to reach victory and qualify for the knockout semi-finals with the 2nd privileged position. The match takes place on table 4.

* After Italy’s Youth Contender some notable figures were recorded for the Greek colors in the international rating tables. And change of position and returns to the World Ranking List of young ages and new entries. In the boys’ Under 13 category, Kostas Fakaros moved to number 113 out of 190 (he has 26 points). Konstantinos Alexoudis, who scored 3 wins and was placed in positions 17-32 of this category, like Fakaros, entered the world rating table for the first time. It appears at number 191 with 13 points. In the same age category, Yiannis Kioseloglou returned to the tables and is at number 310 with 6 points.

Always in the 45th edition, Despina Aba, who participated last week in the Youth Contender of Hungary, did not have the points advantage to appear again on the rating boards. He remains out of the categories up to 17 and up to 19 years old. Among the girls, Angeliki Evmorfiadis is in the respective tables (341 and 450 respectively), while Malamatenia Papadimitriou is number 121 in the Under 19 category.

* Yiannis Sgouropoulos was not included in the Enebon trio in the second match for the French professional league. The former French champions beat Caen 3-2 at home to face Sweden’s Christian Karlsson, Taipei’s Chuan Chi Yuan and Denmark’s Anders Lind. The Eleusinian ace sat on the bench, but it was a beautiful experience as it was Enebon’s first match at their brand new and magnificent sports center and attracted 700 fans. On Friday 11/11, Enebon continues in the championship, which has started with two marginal victories.

* Tomorrow Friday, Linz Frosberg starts its matches in the Women’s Champions League in the Czech Republic. For the 4th group in stage 2 and with Malamatenia Papadimitriou on the roster, the Austrian team faces Moravski Krumlov. He is to compete with the same opponent on Sunday 13/11 in Leeds. French Saint Quentin is also in the group.

Facebook
Twitter
Pinterest
WhatsApp
Previous article
Hamilton: “We have a huge uphill climb to get back”
Next article
Ecuador: Justice annuls the conviction of imprisoned former vice president