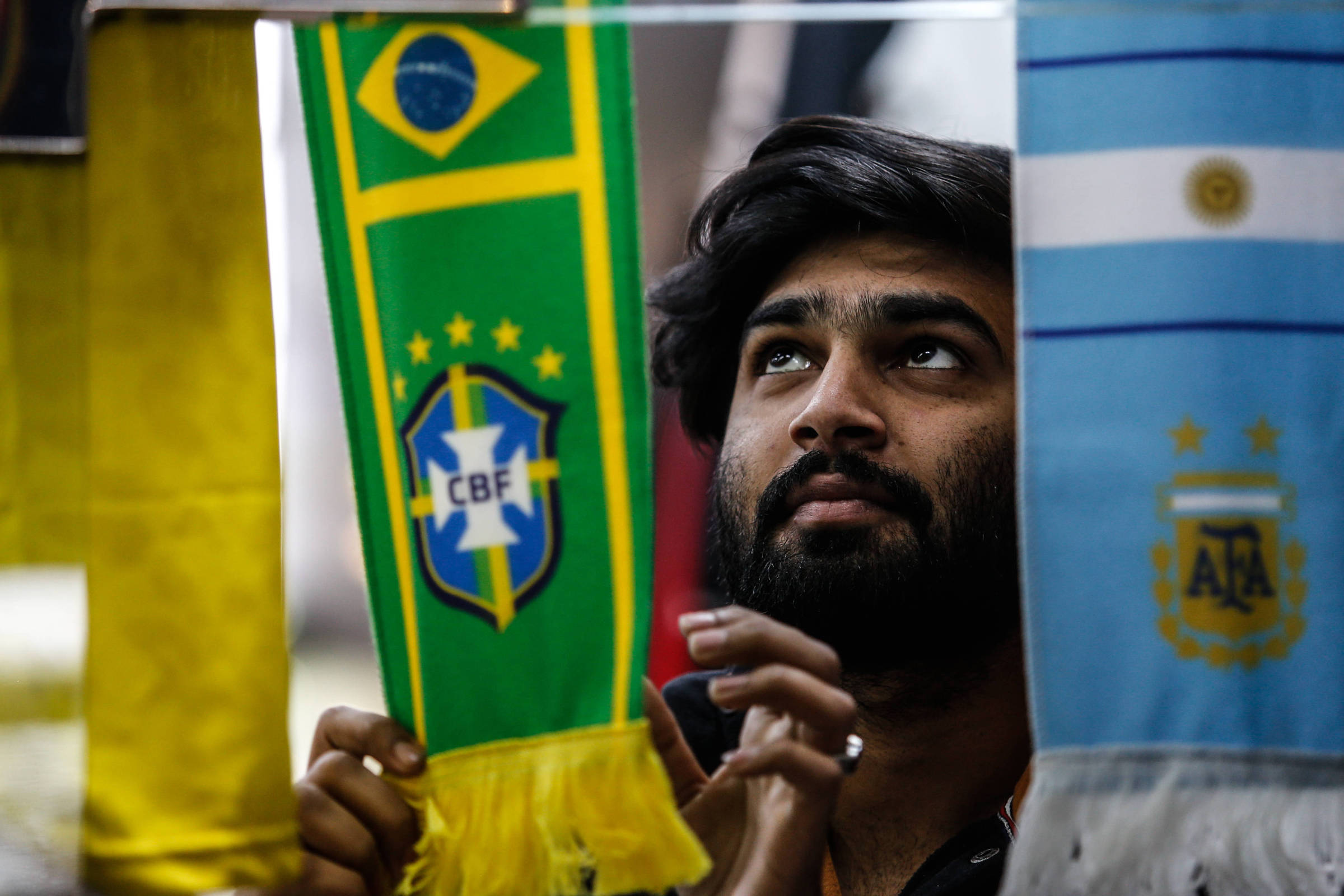 ‘If you cut me, my blood will come out blue and white’: fanaticism for Brazil and Argentina among migrants in Qatar

On the red line of the Doha metro, Emin Ezdan, 1, is impatient on the lap of mother Afreen Shihabudeen, 26. Even at this age, she wants to play with her cell phone. Yellow shirt and blue shorts, she is on her way to her first match for the Brazilian national team.

Mother and daughter are accompanied by aunt Sefreen Fthima, 19, and grandparents Shihabudeen Mohammed, 60, and Ruby Shihabudeen, 45. All are from India.

“The whole family is fanatical about Brazil. We’ve been waiting for this game for months”, says Shihabudeen, who couldn’t wait to get to the Lusail stadium, where Tite’s team would debut in the World Cup against Serbia this Thursday (24th). ).

At the same station and on the way to the same arena, Hassan Malik, 43, followed the songs of the Argentines on the train last Tuesday (22). He knew the words to songs in Spanish and what they meant. But he doesn’t master the language.

Born in Bahrain, he shows a tourist coming from Buenos Aires his photos from when he went to see Argentina at the 2018 World Cups, in Russia, and 2014, in Brazil.

“You really are a fan!” says the Buenos Aires native.

Walking through the streets of Doha is bumping into shirts from the Brazilian and Argentine national teams on the body of immigrants working in the construction and services sectors. These are the two teams that make up the biggest crowds at the World Cup. That’s because of them, not people who came from South America.

For the population born in India, Pakistan, Bahrain, Sri Lanka, Bangladesh, Bahrain and Nepal that make up the working mass of Qatar, there are no options other than the selections of Neymar and Messi. It’s not sympathy. It’s love. Asked how loyal he is to Argentina, Shemin, 36, stretches out his arm and, with the other hand, makes a gesture as if he were passing a knife across his wrist.

“If you cut me, my blood will come out blue and white,” says the Indian employee of a cellphone shop in Asian Town, the neighborhood with the highest concentration of immigrants in Doha, the capital of Qatar. He declined to provide his last name.

His sentence is almost a tango lyric. Rhythm he doesn’t know, by the way.

Stimulated, Syed Iltakher Uddin, 40, from Bangladesh, starts reciting names: Neymar, Antony, Dani Alves, Gabriel Jesus. He shows on his cell phone photos of other Brazilian fans who are in his homeland.

“There are many of us. If you go there one day, you’ll realize that there are millions of us,” he says.

“But why are you rooting for Brazil?” asked the friend beside him.

It is the doubt of other foreigners who are at the World Cup and see the devotion of people who live in Asia and follow what is happening in football in South America.

“This comes from the 1980s. In India, Pakistan and other countries in the region, football started to be shown on TV in the mid-1980s. Anyone who is old enough to remember that era likes Argentina because of Maradona. There is those who had their first contact with football with the 2002 World Cup, Ronaldo, Ronaldinho Gaúcho. Many of them are fanatics for Brazil”, explains the Indian Habiblir Rehmon, 29, who owns a shop in a mall frequented by immigrants.

A fanatic for the Brazilian national team, he shows a ticket to see Tite’s team matches in Qatar. Watching the yellow jersey at the Worlds is something he never thought possible.

“I have several acquaintances who wanted to go and couldn’t get a ticket”, he adds.

It is also an attempt to have a selection to call your own, a team that plays relevant matches. India is ranked 106th in FIFA. Bangladesh is 192nd. Sri Lanka, 207th. None of them have ever qualified for the World Cup.

But other teams have won in recent decades and do not find similar fanaticism in Qatar. France, Germany, Spain and Italy have won the last four tournaments. The last time a South American won a World Cup was Brazil in 2002. The Argentine case is worse. It was in 1986.

The individualities count a lot in the way they cheer. Argentina didn’t win, but for the past 17 years they’ve had Lionel Messi, one of the greatest players in history. Brazil at the beginning of the century had Ronaldo and, mainly, Ronaldinho Gaúcho.

“Anyone who goes to Kerala will find 90-, 95-year-olds wearing Brazilian or Argentine national team jerseys, cheering. The streets are painted in the colors of both countries”, Shahid Nelleri, 42

Kerala is the coastal region of India famous for beaches and ecotourism. “We used to do that in Kerala. There are many, many streets. There is a dispute. It is an immense feeling of love for Brazil or Argentina”, notes Afreen Shihabudeen, who moved with his family to Doha.

In Bangladesh, it’s a rivalry that can be a police concern. When the two teams face each other, there are fights. Deaths have already been recorded. “It’s something very serious”, confirms, with a serious tone, Uddin. “But there is also a happy side. People come together to party, eat, drink and dance.”

Without a ticket, most immigrants in Doha fanatical about Brazil and Argentina flock to the fan zones on match days. They would like to go to the stadium, but it will not be possible due to financial issues and because they have not been able to access FIFA’s website in time to buy tickets.

Even so, they are physically closer to their national teams than those who remain in their home countries. It’s already something.

“We hope that she has the same passion for Brazil that we have. It will happen”, promises her grandfather Shihabudeen Mohammed, about his granddaughter Emin.

With a year of life, she already started witnessing a victory of the team preferred by her family in World Cups.