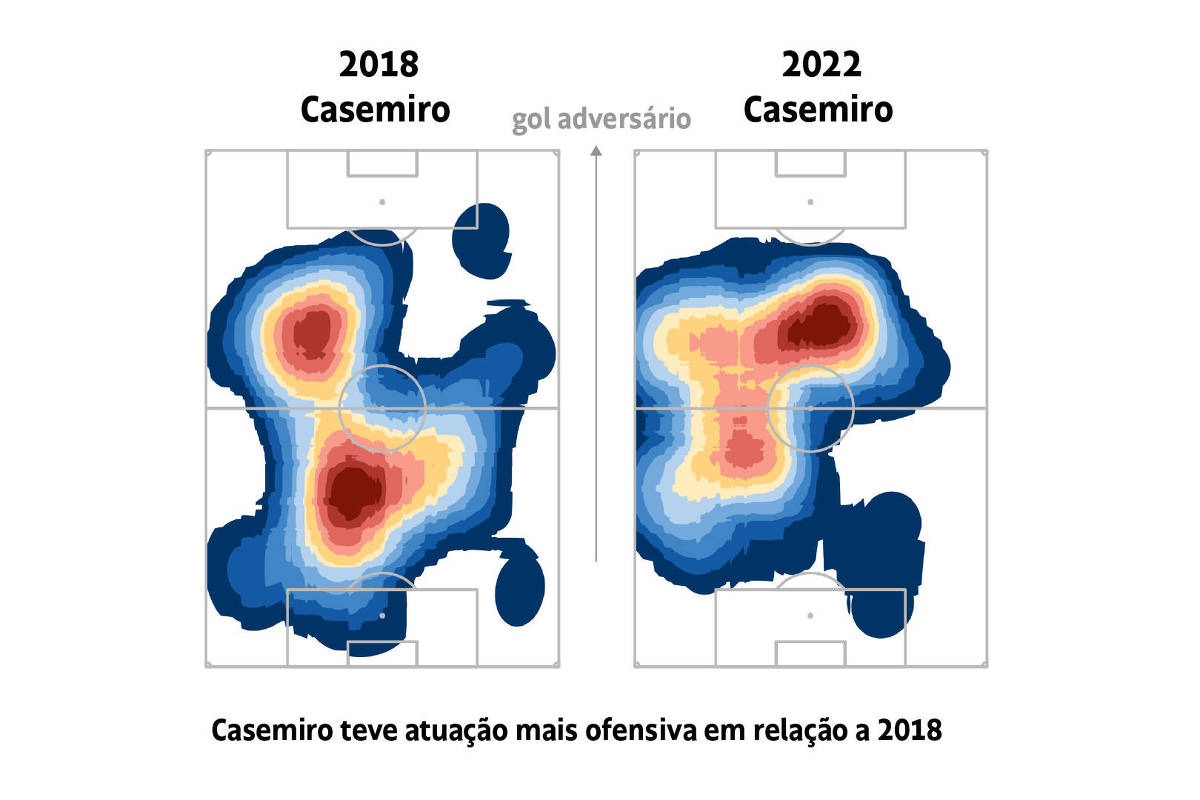 It took three duels for Brazil to strike Switzerland off the list of teams it had yet to win in World Cups. Interestingly, the winning goal by 1-0 this Monday (28) was scored by one of the few leftovers from the last meeting between the teams.

Casemiro had also been in the starting line-up in the 1-1 draw for the first round of the 2018 World Cup. A truncated game that marked the worst Brazilian debut in the tournament in 40 years, ending a sequence of nine consecutive victories in opening matches, since 1982.

Brazil had more difficulties to get to the attack with danger, but the use of the moves was better. In 2018, coach Tite’s team had finished 21 times, five of them on target. This year, he kicked 13 balls to hit the same number in the direction of the goal.

This time, it was Casemiro who pulled a rabbit out of his hat, entering the area as a surprise element to receive a pass from Rodrygo and finish first.

The map of the steering wheel’s actions shows that it was not an isolated act. The number 5 had a more offensive participation in relation to the 2018 duel, sometimes positioned between the defense lines formed by the Swiss defenders and midfielders.

Before the goal, Casemiro had already appeared as a point guard in the move that ended in a goal annulled by Vinícius Júnior, due to Richarlison’s impediment.

The defensive midfielder had more freedom to move forward without getting too attached to defensive recomposition, especially after Bruno Guimarães came on in Fred’s place.

In the debut against Serbia, Casemiro had already presented himself as an option to finish from behind. He hit the crossbar with a placed shot from the edge of the area.

This was the number 5’s first goal in World Cups, in six matches so far. Despite his defensive role, he finished the second round of this edition as the best finisher in Brazil, tied with forwards Richarlison and Vinícius Júnior, with five shots each.

Compared to 2018, Brazil had a more balanced offensive action, filling the attack more on the right side, first with Raphinha and then with Antony. This had already been observed in the debut against Serbia.

The selection carried out 117 actions on the right of the opposing field, equivalent to 31%. In the previous meeting with the Swiss, there were only 77 (or 24% of the total).

On paper, the tactical systems of the two teams were similar in both duels. The fundamental difference was the practically perfect performance of the Brazilian defense.

The Swiss team risked six submissions and failed to hit the target once. Four years ago, he finished the same six shots, but two of them were on target.

In addition to Casemiro, only goalkeeper Alisson and defender Thiago Silva were in the starting lineup for that match. Gabriel Jesus also participated in both clashes, but was the attacker at the time and, now, was called off the bench in the 28th minute of the second half.

Striker Neymar and right-back Danilo were also regulars for the national team four years ago, but were out this time, both due to injuries suffered in the first round.

The Swiss team, on the other hand, maintained its base, with a total of seven athletes who had also played in the last Cup. In addition to goalkeeper Sommer, defenders Schar and Akanji, left-back Ricardo Rodríguez and midfielder Xhaka were once again in the starting line-up. Up front, Seferovic came off the bench to replace Embolo, reversing the roles of four years ago.

Brazil’s goal in 2018 was scored by Philippe Coutinho, in a beautiful shot from outside the area, in the 20th minute of the first half. The tie came shortly after the break, 4 minutes into the second half, in a corner kick deflected by Zuber.

Facebook
Twitter
Pinterest
WhatsApp
Previous article
Vouliagmeni fought but failed against Barceloneta
Next article
Skrekas for a ceiling on natural gas: “We will not rest if we do not succeed”