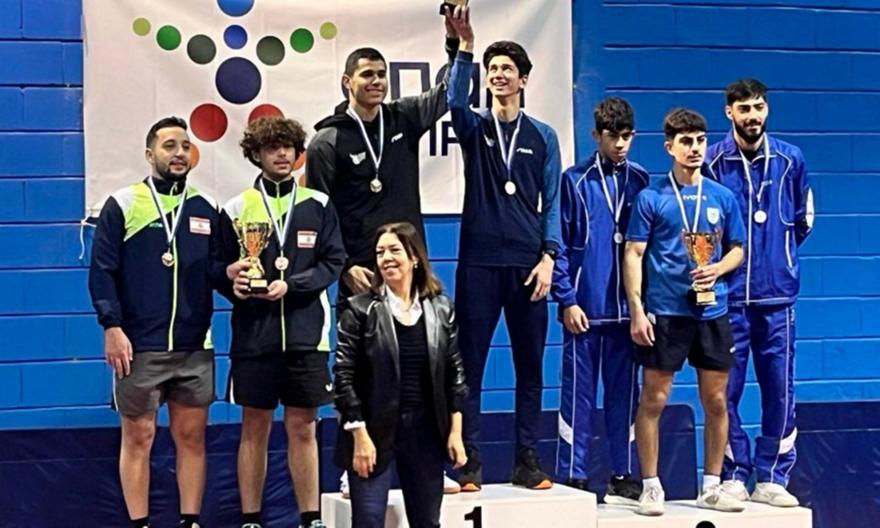 In the international table tennis tournament that ended on Sunday in Nicosia and became the first multi-training center “Evangelos Florakis” and this year involved sportsmen and women up to the age of 21, Greece won three more gold medals in the individual events and added them to the two of last Friday in group. In the K21 men’s singles, 20-year-old Gerasimos Hatzilygeroudis emerged as the winner. In the K21 women’s singles, 16-year-old Stella Tzaridou took the lead.

In the K21 men’s doubles, Hatzilygeroudis won a second gold medal with teammate 17-year-old Alexandros Madesis. Of course, there were also medals of different colors and we remind you that, apart from Greece and Cyprus, Romania and Lebanon also had athletes.

POEPA also informed EFOEPA about the final results of the individual competitions:

In men, Greece’s dominance was absolute, as, after the team event, it took first place in singles and doubles. Hatzilygeroudis climbed to the highest step of the podium in the singles 21, defeating the Cypriot Ilias Siarpe in the final with 4-1 sets. The bronze medal went to the Lebanese Sudedin El Habash.

In the K21 doubles, Madesis and Hatzilygeroudis showed that they had the upper hand. In the final, they defeated the Lebanese Malek Hbib Hassan/Sudedin El Habash and lifted the cup. The third place was taken by Elia Sarbel/Stylianos Georgiou from Cyprus A.

“Two out of three” had the blue and white colors for the women. Stella Tzaridou won the gold medal in the K21 singles. In the exciting final, she prevailed over the Cypriot junior champion, Fotini Meletie, with 4-3 sets. In fact, he achieved a tremendous turnaround from 0-3 behind. Lemonia Gaidatzi wore the bronze medal on her chest. All three girls who reached the medals are from the junior category.

Greek “duels” also arose in the simple. In the men, Hatzilygeroudis and Madesis faced off in the eight round and the former won with 4-2 sets (opponents were placed directly on the scoreboard, because earlier Madesis had qualified as second from his group with a loss to a Lebanese athlete).

In the women, there was an excellent semi-final between Tzaridou and Gaidatzi. The second one led with a 3-1 set, but in the end Tzaridou prevailed with 4-3.

Finally, in the K21 women’s doubles, Georgia Avraam/Fotini Meletie from Cyprus A (athletes who also cooperate with Greek clubs, Pera and AEK respectively) won. Stella Tzaridou and Lemonia Gaidatzi competed in the final and took second place. And followed by the Romanians Maria-Victoria Vlad/Raissa-Anemona Raileanu.

The singles system included groups and tables, while in the doubles there were “knockout” games from the beginning.