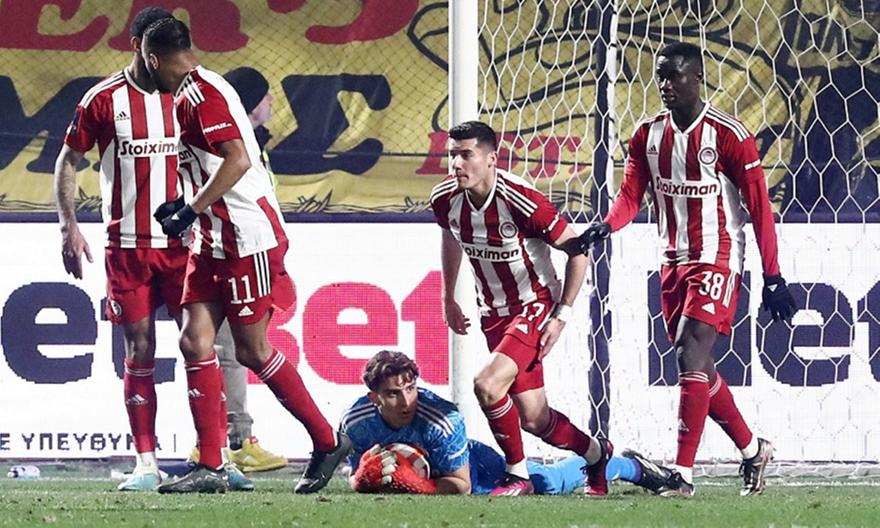 Hero Tzolakis, executor El Arabi and Olympiacos in the semi-finals with AEK!

Kerveros Tzolakis, killer El Arabi and in the “4” of the Cup o Olympic!

The Piraeus passed me by 1-0 from “Kl. Vikelidis” starring the 20-year-old goalkeeper, who caught in the 84th penalty which was won and executed by Greyfor which Doe was dismissed. The Moroccan sealed the qualification with a goal in the 88th minute, making an appointment for the “red and whites” with AEK in the semi-finals.

Earlier, the home team strongly protested a penalty for a handball by Embilas in the 60′.

In the mind of the coaches

With the established 4-3-3 Pardew lined up Ares. Cuesta was expectedly under the posts, Mazikou and Piersman were the two full-backs, while Fabiano and Brambetz were firmly the stopper duo. Doukoure and Etembo in the center, while Darida further forward, having a more creative role. Manu Garcia and Iturbe on the wings, with Gray moving up top.

With 4-2-3-1 Mitchell lined up Olympiakos, leaving aside the three-ten system, with Hames on the bench and Fortounis out of action. Tzolakis was found under the rafters. Rodinei (right) and Vrousai (left) the full backs, Papastathopoulos and Doi the two stoppers. Embila and Samaseku in midfield, with Masoura on the right “wing” and Biel on the left. Valbuena returned to action and had a creative role behind Bacabu.

They say that many times these matches are won by the one who shows that he wants them the most. Although this is not enough in itself, the team that entered the field more determined was Aris. He had more intensity in his game at the beginning, showing more aggressive moods compared to the guests, having the first good moment only in the 1st minute, with Etembo’s powerful shot that Tzolakis took. On the contrary, in another recent match, the Piraeus made a nervous start. It happened against Aris in the league and Cup, but he didn’t pay for it, it also happened against Atromitos, the only exception being the match against Volos.

In the opening ten minutes, the home side also threatened with Gray (4′), who found himself in a shooting position and took a tepid shot, complaining for a penalty, to mark Doe who put his hand on his back. The two of them know if it was that strong or not. Olympiacos started a little after the completion of a quarter of an hour to pick up the pace a bit and the first final came in the 13th minute, with Masoura catching a header and Questa blocking easily.

The first good moment of the “red and whites” occurred in the 20th minute, when Valbuena made a volley and Cuesta made an impressive intervention. Seven minutes later, Mitchell’s side made it 0-1, producing a fine counter-attack with Biel curling in, but Masouras couldn’t find the ball and Mazikou fired almost over the line in front of Bakabu.

Aris had a huge opportunity to open the scoring in the 34th minute. Gray broke in from the right, with Doe unable to stop him, he took a powerful shot and Tzolakis showed good reflexes to keep it 0-0.

In the 43′, Olympiacos launched a very good counterattack, but missed Bakabou’s good finish. Valbuena put Piraeus in front, picked out Masoura on the left who turned for the 31-year-old striker, who missed, finding the ball rather with the stick.

Carbon with the first part was the start of the two teams in the second half. Aris entered stronger, more decisively and Olympiacos had a passive role, as a result of which Piraeus did not manage to get anything good in the first quarter. The “yellows” tried – without success – to threaten through static phases, since in a normal flow they lacked something in the final effort.

The film of the match via sport-fm.gr

More in a while…