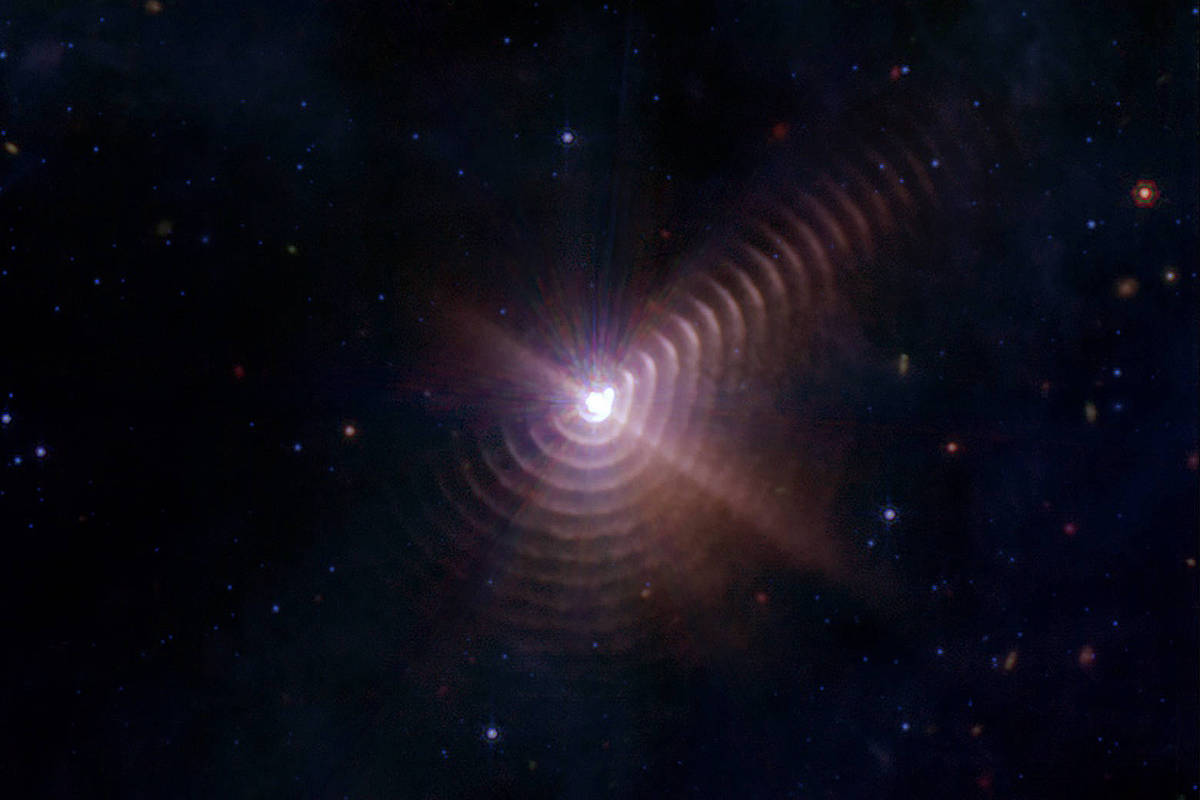 NASA’s James Webb telescope imaged 17 dust rings produced by a pair of stars, located just over 5,000 light-years from Earth. According to NASA, which released the information on Wednesday (12), the image corresponds to the “fingerprint” of the duo, which is called Wolf-Rayet 140 (WR 140).

According to astronomer Ryan Lau, from NOIRLab, the capture corresponds to more than a century of space dust production. “The image also illustrates how sensitive this telescope is. Before, we could only see two dust rings using ground-based telescopes. Now we see at least 17 of them”, says the expert, who is the lead author of a new study on this system. , published in the scientific journal Nature Astronomy.

According to the statement published by NASA, the duo Wolf-Rayet 140 is formed by type O stars, the oldest being called Wolf-Rayet. This type of star is born with at least 25 times more mass than the Sun in our system.

Both stars eject streams of gas into space — the so-called stellar winds — with the amount of gas produced increasing as they age, as they are burning more than in their youth. The Wolf-Rayet in this duo may have lost more than half of its original mass through this process.

Because they have intertwined orbits, from time to time the two stars end up passing closer to each other — roughly the same distance between the Earth and the Sun. It is at this time that the dust rings are formed, due to the collision between the stellar winds expelled by them.

When they meet, the gas is compressed and turns into dust. In this system, this occurs every eight years.

“Some other Wolf-Rayet systems form dust, but none are known to make rings like Wolf-Rayet 140. The single ring pattern forms because the orbit of the Wolf-Rayet star in WR 140 is elongated, not circular.” says the statement from the US agency.

These dust circles mark the passage of time, like the rings that grow inside tree trunks. That’s why the discovery was called a fingerprint.

The study authors believe that stellar winds from WR 140 also swept away other residual material from the region in which they lie. This would be why the rings remain so unchanged rather than smeared or scattered.

“There are likely even more rings that have become so faint and scattered that not even Webb can see them in the data,” the statement reads.

According to NASA, this type of system may have played an important role in the formation of stars and planets.

“When a Wolf-Rayet clears an area, the swept material can accumulate in the surroundings and become dense enough for the creation of new stars. There is some evidence that the Sun formed in such a scenario,” reports the agency.

Thanks to Webb’s technology, called the Mid-Infrared Instrument (MIRI), which detects longer infrared wavelengths, the researchers have gotten better evidence that Wolf-Rayet stars produce carbon-rich dust molecules. That’s because MIRI is able to visualize cooler objects, such as dust rings, and reveal their composition.

“Even though Wolf-Rayet stars are rare in our galaxy because they are short-lived, […]it is possible that they produced a lot of dust throughout the galaxy’s history before exploding and/or forming black holes”, says Patrick Morris, an astrophysicist at Caltech (California Institute of Technology), in the United States, and co-author of the new study. , in the communiqué.

“I think with NASA’s new space telescope we’re going to learn a lot more about how these stars shape the material between them and trigger the formation of novae in galaxies.”

Facebook
Twitter
Pinterest
WhatsApp
Previous article
Thessaloniki: 2 teenagers were arrested after a phone call – hoax about a bomb in a school complex
Next article
Civil Protection: Meeting in anticipation of bad weather – Activate 112 if deemed necessary