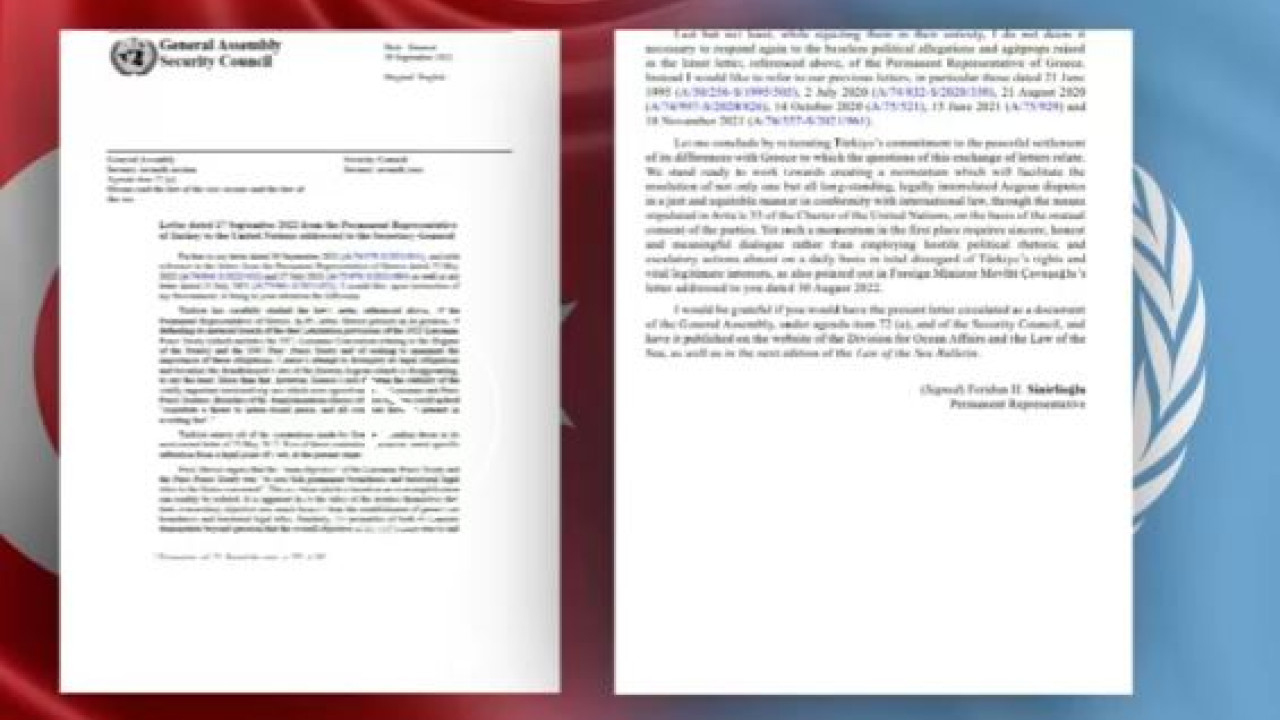 With Athens having defined the red lines against the new waves of Turkish provocations, Greek diplomacy is preparing for the next round of briefing partners and allies, shielding its positions against Ankara’s crescendo of aggression.

New Turkish letter to the United Nations, in which Turkey insists on linking Greek sovereignty over the Aegean islands with the obligation of demilitarization. He even goes so far as to say that the islands were granted to Greece with reduced sovereignty and argues that international treaties, even the one of Paris to which Turkey is not a party, give it the right to question Greece’s titles to the islands and marine zones.

The letter, which was obtained by ERT, is dated September 17, has five pages and is in response to the Greek letter on the issue of the demilitarization of the islands.

Diplomatic counterattack to the Turkish rhetoric of provocations

With Athens having defined the red lines against the new waves of Turkish provocations, Greek diplomacy is preparing for the next round of briefing partners and allies, shielding its positions against Ankara’s crescendo of aggression.

Athens is building walls against the rhetorical de-escalation of Recep Tayyip Erdogan and top Ankara officials and preparing for the next round of diplomatic counter-offensive.

With the aim of informing partners and allies about the neo-Ottoman crowns of the Turkish leadership, three milestones are circled in the prime minister’s agenda

Mitsotakis’ “barrage” of international contacts with a focus on Greek-Turkish

In Sofia, tomorrow Saturday, October 1st, the meeting between the President of the European Commission, Ursula von der Leyen, and the Greek Prime Minister, Kyriakos Mitsotakis, will take place on the sidelines of the opening of the natural gas interconnection line between Bulgaria and Greece.

Mr. Mitsotakis’ schedule, regarding his presence at European summit meetings in the near future, closes with the European Council Summit, on October 20-21, in Brussels.

Mr. Mitsotakis is expected to raise the issue of Turkish challenges at his meeting with the president of the European Commission in Sofia, on the occasion of the opening of the IGB pipeline. At the same time, he will inform his counterparts both at the Informal Summit of the “27” in Prague, and during the European Council on October 20 and 21 in Brussels.

Support to Greece and Condemnation of Turkey by the Commission

Speaking to ERT, the vice-president of the Commission, Vera Jourova, expresses the unconditional support of Brussels to Athens.

“Even if (the whole) world stands against us, we will continue to protect our rights in Cyprus, the Aegean and the Eastern Mediterranean. We are strong on the field and at the (negotiation) table. Sometimes the table collapses, then we go down to the field.”

The representative of the government of the Republic of Cyprus comments on the information that brings Turkey to submit an appeal to the United Nations for recognition of the pseudo-state.

“We are monitoring all developments and taking the necessary measures to defend and protect the sovereign rights of the Republic of Cyprus” says Mr. Pelekanos.

At the beginning of the week, it is expected to clarify the landscape, regarding the presence of the Turkish president at the European Political Community Summit, which will take place in Prague.