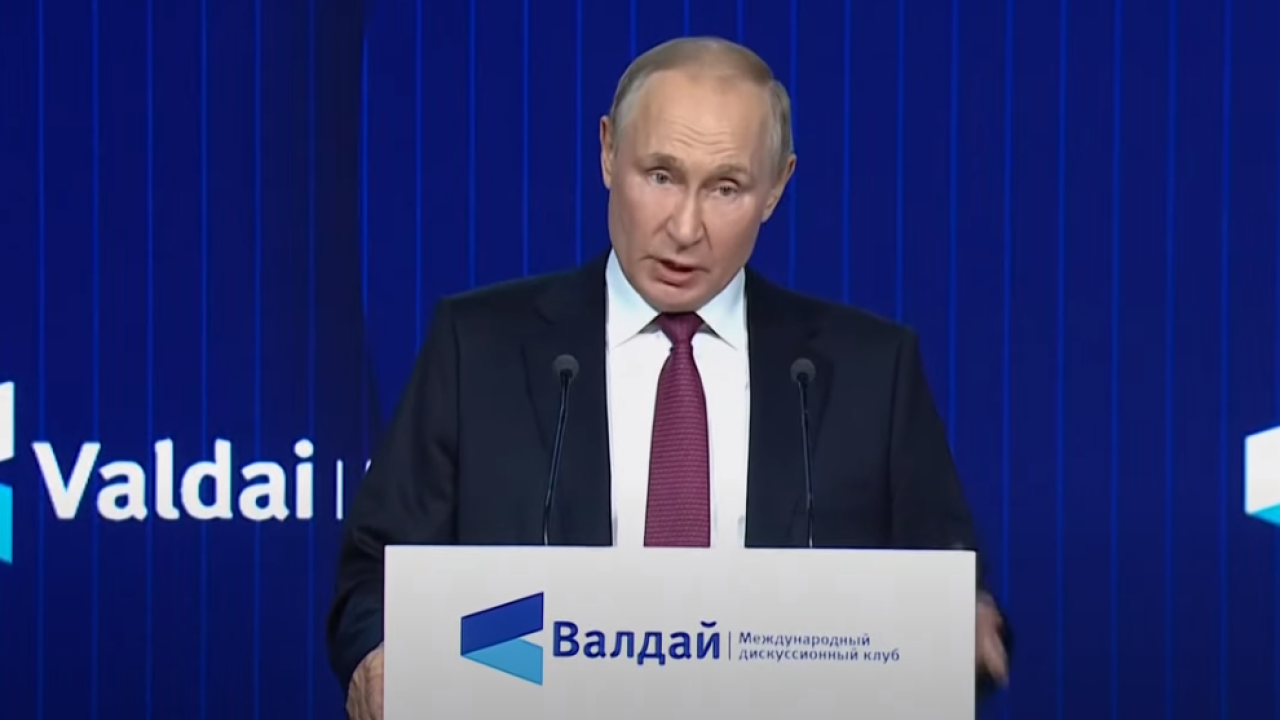 New attack Putin: “The West is playing a dangerous, dirty and bloody game” – “It is fueling the war in Ukraine”

The Russian president accused the West of doing everything it can to escalate the situation and added that he will never do what the West tells him.

The Russian president once again launched an attack on the West, Vladimir Putin during his annual address today at the Valdai Discussion Club forum. As argued by West is doing everything to escalate the situation by blaming her how does one play “dangerous, dirty and bloody game”, however, he pointed out how is starting to lose the upper hand.

“The West has taken several steps towards escalation and is always striving for it. There is nothing new there. They are fueling the war in Ukraine, organizing politicians around Taiwan, destabilizing the global food and energy markets,” said the Russian president and continued:

“As to the latter, I have no doubt of it. It is due to a series of systemic mistakes committed by the Western authorities,” he said.

He also argued that “world domination is exactly what the West has decided to bet on in this game. But this game is dangerous, dirty and bloody. It questions the sovereignty of peoples and nations, their identity and uniqueness and is not interested in the interests of other countries.”

“She is blinded by colonialism”

Alongside, accused the West of being “blinded by colonialism” and “trying to restrain the development of other cultures” however he underlined how “loses the upper hand” and “quickly becomes the minority”.

“Sooner or later, the West will have to start taking charge of our common future. It is no accident that she says that her culture… should be recognized as universal. That’s how they behave. And they insist through their politics that they all accept these values ​​unconditionally.”

According to the Russian president, humanity has two options – either to continue to “accumulate all the problems that are sure to overwhelm us all” or for nations to work together “to find solutions”.

“Russia will never do what the West tells it”

The Russian president asserted that Russia does not consider itself an enemy of the West, however, he emphasized that it will never tolerate what the West tells it to do.

“Western elites have no right to force others to follow their way, but no one can dictate to our people how we should build our society.”

He also accused her of “throwing all the rules aside” when faced with competition from Asia and still seeing others as “second-class people”.

As he said uses economic sanctions and makes “color revolutions” against its opponents, as it cannot compete fairly with the rising economic and political power of Asia.

“The US is using the dollar as a weapon”

He also stated that the US has devalued the international financial system by using the US dollar as a weapon and estimated that other countries’ moves to reduce their dependence on the dollar will be accelerated.

At the same time he hinted that the war in Ukraine is the result of years of tensions that have been building for many years.

“Tensions are rising and there is an earthquake,” he said. “This was a build-up of tensions and a flare-up. The latest developments are “tectonic shifts in the world order”” he said characteristically and added that we are facing one of the most “dangerous” and “unpredictable” decades since World War II.

Taiwan bets on chip industry against fears of Chinese invasion