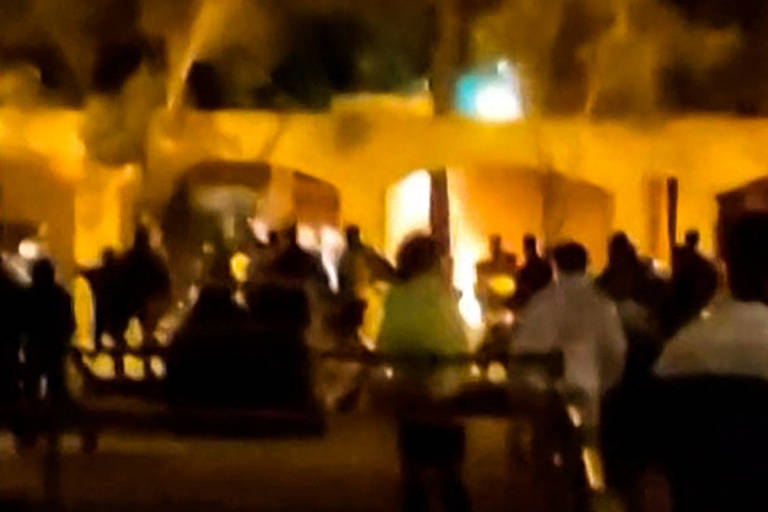 Iranian activists claim to have set fire to the house where the founder of the Islamic Republic in the country, Ayatollah Ruhollah Khomeini, was born, and videos posted on social media this Friday (18) show a crowd passing by and screaming in front of the burning building.

The house, which has been turned into a memorial museum, is in the city of Khomein, from which his surname comes, located south of the capital, Tehran.

French news agency AFP says it has independently verified the veracity of the videos. Reuters reported that it had confirmed the location of two of these recordings, but was unable to independently verify the dates they were filmed. The activist network 1500Tasvir claims that the incident took place on Thursday night (17).

Iran’s semi-official Tasnim news agency, however, denied that Khomeini’s house was set on fire, saying that a small number of people had gathered outside. “The reports are a lie,” said Tasnim. “The doors of the house of the late founder of the great revolution are open to the public.”

Khomeini was a staunch opponent of Shah Mohamed Reza Pahlavi and had to go into exile in France, from where he returned, triumphant, in 1979, to lead the Islamic Revolution. He died in 1989 and his current successor, Ayatollah Ali Khamenei, is under intense pressure from nationwide protests calling for an end to hard-line clerical rule.

The demonstrations began after the death of young Mahsa Amini, who was detained by the moral police, and constitute the largest street movement against the regime since 1979. The protests were initially against the requirement for women to wear a veil, a rule imposed by Khomeini , but gave rise to a broader movement to end the Islamic Republic.

On Friday, videos posted by the organization Tasvir showed demonstrators in Sistan-Baluchistan province chanting “Death to Khamenei”. In one of the towns, Chabahar, they allegedly removed and trampled on an avenue sign bearing the name of Ayatollah Khomeini.

For its part, the Tasnim agency reported pro-government demonstrations in the northeastern city of Mashhad, where two members of the Basij militia were killed the day before in clashes with demonstrators.

State media said authorities held a funeral ceremony for seven people killed in the southwestern city of Izeh in what it described as a terrorist act.

But videos posted on social media show the mother of one of the victims, a 10-year-old boy, blaming security forces for her son’s murder. A video posted on social media purportedly of the child’s funeral showed protesters chanting “Khamenei, let’s bury him”. Reuters was unable to independently verify the authenticity of these videos.