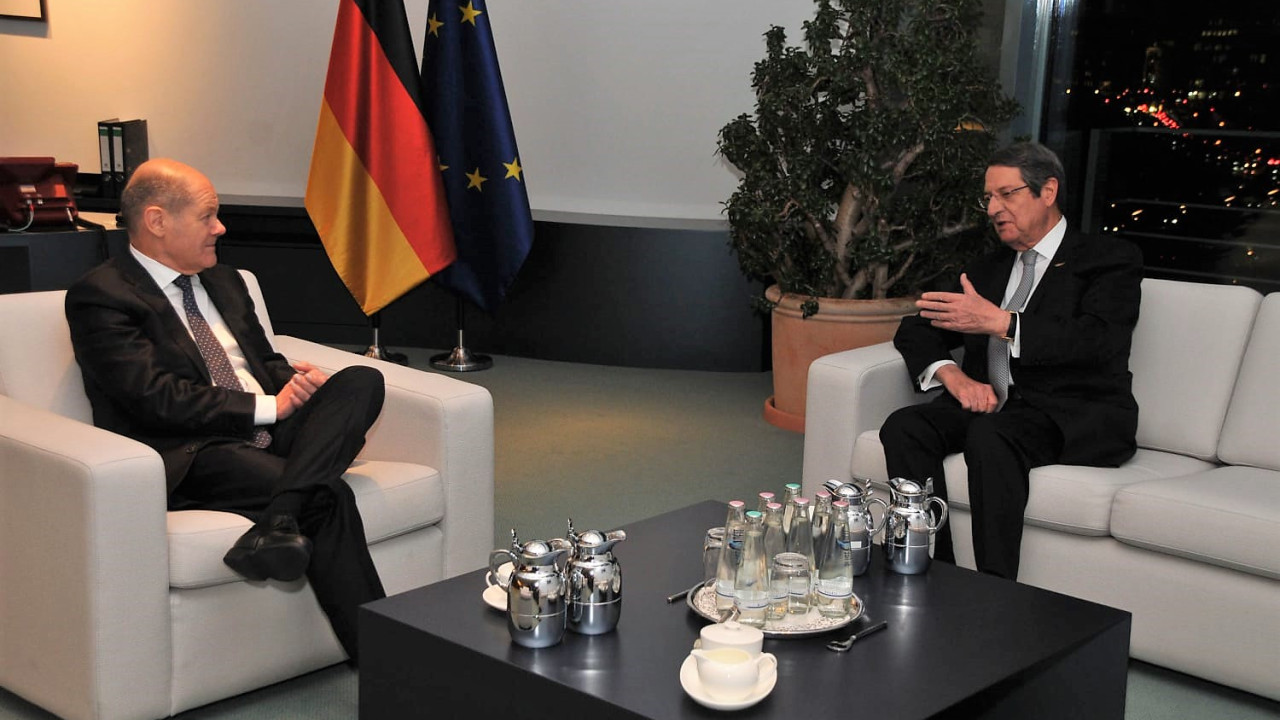 Berlin: Solz called for Cyprus-Turkey dialogue “on the basis of international law”

During his meeting with Nicos Anastasiades, the German chancellor reaffirmed his support for a bi-zonal, bi-communal solution to the Cyprus issue

The Chancellor of Germany expressed his support for a bi-zonal, bi-communal solution of the Cyprus issue, based on the decisions of the United Nations. Olaf Solz after today’s (Wednesday) meeting with the president of the Republic of Cyprus, Nicos Anastasiades. He also assured of Berlin’s intention to support the eventual resumption of talks to resolve the issue under the auspices of the UN.

During the joint press conference, Mr. Soltz also referred to the importance of “good neighborly” relations in the Eastern Mediterranean, where, as he noted, there are good opportunities for regional cooperation in the field of energy. “My impression is that Cyprus is willing to contribute in this direction and we hope that the other countries will do the same”, said the chancellor, stressing that its relationship of the Republic of Cyprus with Turkey is important, while problems must are resolved through dialogue, on the basis of international law.

For his part, Nikos Anastasiadis emphasized that Cyprus can contribute significantly to finding alternative sources and routes for energy, while, with an eye both on the Russian attack against Ukraine and on the occupation of territory of the Republic of Cyprus by Turkey – a country seeking to become a member of the European family -, highlighted the importance of respect for the sovereignty and territorial integrity of states, good neighborly relations and the resolution of disputes on the basis of the United Nations Charter. As far as the Cyprus issue is concerned, the president of the Republic of Cyprus clarified that “there is no possibility of a solution on the basis of those unjustified and against international law, Turkey claims” for a two-state solution and called on Ankara to change its position, as the prolonged tension will also aggravate Turkey’s relations with the EU. “By insisting on a solution that is not based on UN resolutions, the only thing Turkey will achieve is self-isolation,” he added.

My sincere thanks to my friend the Chancellor of Germany @OlafScholz for our hospitality and constructive discussions. It is our common will to further strengthen and expand the historically excellent relations between our countries and peoples, on a bilateral and European level. 🇨🇾🇩🇪 pic.twitter.com/BA6zGtLqrM

Grateful for the time-honored principled attitude of Germany in the Cyprus issue. I welcome his intention @Bundeskanzler to contribute to our new effort for Turkey to return to dialogue, of course ending the illegal actions. pic.twitter.com/m1N2IEG8ZF

Facebook
Twitter
Pinterest
WhatsApp
Previous article
With a rise in Covid cases, São Paulo restricts visiting times in hospitals
Next article
Government will distribute pads to students and street population after being forced by Congress