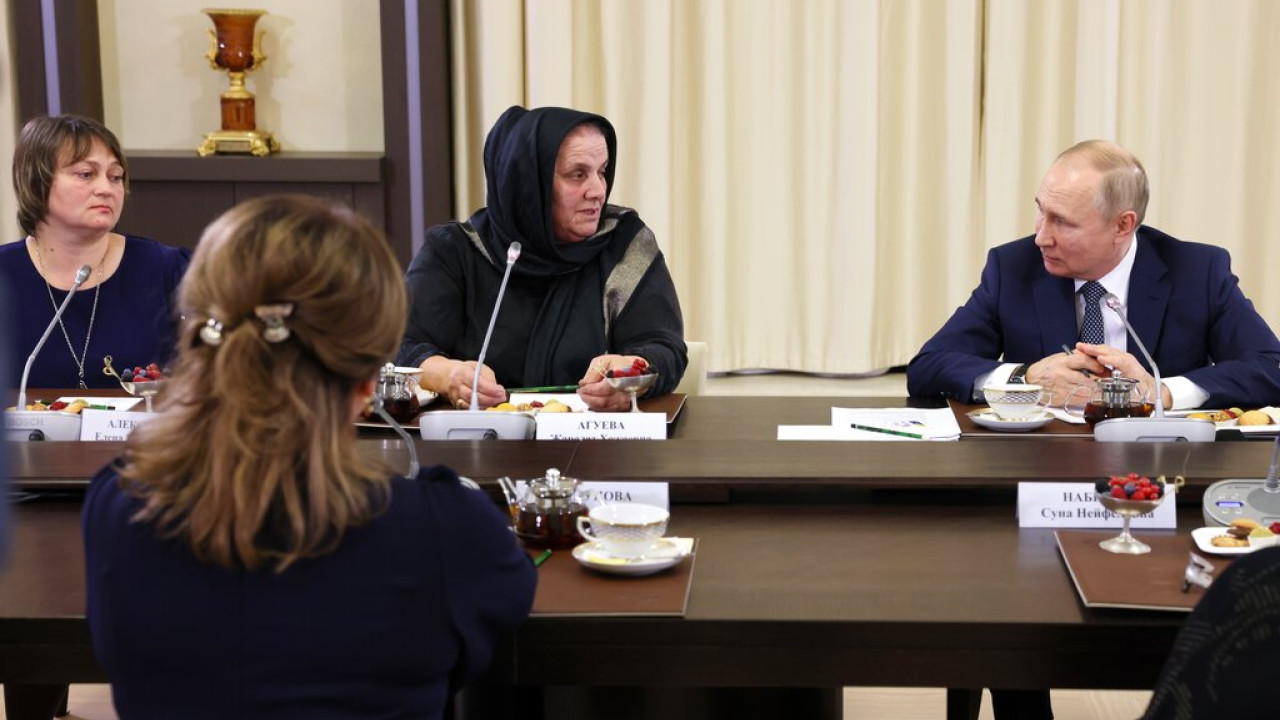 The meeting that Russian President Vladimir Putin had a few days ago with the mothers of soldiers he sent to the Ukraine-Russia war turned out to be a fraud, as reported by the Daily Mail.

“He met with a group of women extremely loyal to him who were carefully selected so as not to ask difficult questions,” the report said, while truly furious Russian mothers and wives, who were not at the meeting, fumed at the embarrassing way in which Putin avoided them.

“I would like you to know that I personally, and the entire leadership of the country – we share your pain,” the Russian president told the women during their meeting at his official residence. “We understand that nothing can replace the loss of a son – especially for a mother … we share that pain,” he added.

Another Putin fake show. Those women are actresses. Those 2 are an example and but even the others have been identified.

It is so revealing that with more than 80,000 killed Russian soldiers Putin could not find (or risk) to sit with a few widows. Pathetic to the core. https://t.co/n0IcpcxpLi pic.twitter.com/cssstKyEzB

He also said during the event, part of which was televised, that “we must achieve our goals and we will achieve them in the end”, denouncing what he called “efforts of the enemy… to disinformation”.

But behind his words, Putin’s officials vetoed him actually meeting the soldiers’ mothers, who wanted to express their anger at how their sons have been put at risk by the Russian president’s plans to invade in Ukraine. It is not clear if Putin met the mother of any of the Russian soldiers killed or maimed in Ukraine.

Russian journalists identified some of the women chosen to meet Putin as known “loyalists” of the president.

One of the women, Nadezhda Uzanova from Abakan and a member of an ultra-patriotic group called Combat Brotherhood, had previously appeared at an event with Putin singing the Russian national anthem in Red Square after he illegally annexed the occupied territories of Ukraine.

Anna Gerusova – seen with Putin at the meeting – is believed to be the wife of a military commissar in the Rostov region. Another woman, Irina Tas-Ool, is a loyal regional government official and it is not clear that she has children of an age to serve. Another, 50-year-old Olga Belcheva, is a representative of the pro-Putin United Russia party.

Yulia Belekhova, also 40, has a son serving in the conflict but has expressed strong pro-war views and is an MP in Putin’s main political party. The son of another mother, Zaradat Aghieva, from Chechnya, has been praised by the region’s Putin-loyal leader, Ramzan Kadyrov. He has two sons – one a military commander and the other a police chief who has threatened conscientious objectors in Putin’s war.

Ironically, Putin told the 17 “mothers” to beware of online “deceptions and lies” about his war in Ukraine. “You can’t trust anything” online about the war, he said.

The women appeared happy to meet him and all 17 willingly posed for a group photo with him.