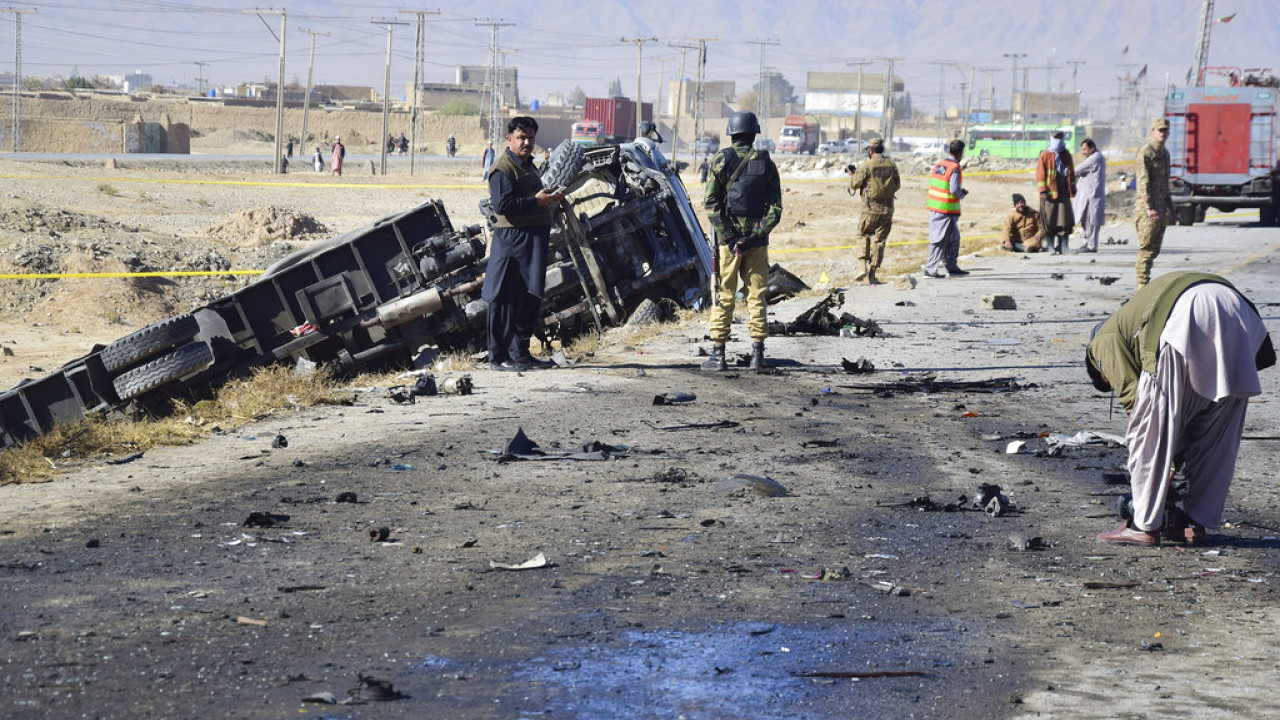 At least four people, including two children, have been killed and 27 others injured in a suicide attack on police officers escorting a vaccination team in western Pakistan, an attack claimed by the Pakistani Taliban, two days after they said they were ending the ceasefire they had declared unilaterally.

The suicide bomber detonated his explosives against a police vehicle accompanying the polio vaccination team in the city of Quetta, Azhar Mehesar, a senior law enforcement officer, told AFP.

According to the latest casualty count, a policeman, a woman and two children were killed, said Wasim Baig, a spokesman for Balochistan provincial health authorities. The 27 injured include “21 policemen and two children”, he clarified.

The explosion threw the police vehicle to the side of the road. Metal fragments were everywhere. Another vehicle, possibly the one used in the attack, had been reduced to a pile of rubble.

The Pakistani Taliban, the Tehrik-i-Taliban Pakistan (“Taliban Movement of Pakistan”), claimed responsibility, saying on Monday they were ending a ceasefire they had extended indefinitely in June to facilitate peace talks. negotiations with representatives of the Pakistani state.

The KPT justified this decision citing the violation of the ceasefire by Islamabad and threatened to launch retaliatory attacks “across the country”.

The attack in Quetta was aimed at “revenge” for the death of one of the movement’s leaders and founders in August, while the ceasefire was theoretically being implemented, said a KTP statement, a copy of which was obtained by AFP.

An organization distinct from the Afghan Taliban, but with the same ideology, the KTP has killed tens of thousands of people, civilians and members of the security forces, since its birth in 2007. It is estimated that the victims of his action are around 80,000.

Although weakened since 2014, following intensive operations by the Pakistani military, it has returned more fiercely since the Taliban returned to power in Afghanistan in August 2021, amid the withdrawal of foreign troops, especially those of the United States, after two decades of war. .

Its attacks have increased by 50% since August 2021 and have claimed the lives of at least 433 people, according to Pakistan’s PIPS Institute.

Islamabad accuses the Afghan Taliban of allowing the KPT to plan and organize attacks on Pakistani territory on Afghan soil. The regime in Kabul denies this.

Jihadists, especially the Pakistani Taliban, have for years targeted the groups that vaccinate children against polio and the police who guarantee their safety.

According to the Pakistani press, more than seventy members of vaccination teams have been killed since 2012, mostly in the province of Khyber Pakhtunkhwa (northwest), where KTP is most firmly rooted.

Polio vaccination runs afoul of lingering suspicion in Pakistan, where conspiracy theories abound, such as the vaccination being part of a Western conspiracy to sterilize Muslim children.

Another theory is that the vaccines contain pork fat, therefore they are forbidden for Muslims.

The climate of mistrust, fueled by ultra-conservative imams, was exacerbated by the organization of a sham vaccination campaign by the CIA, as part of its effort to track down Osama bin Laden, the leader of al-Qaeda, who was killed in 2011 in Abbottabad (north).

On Monday, Pakistani authorities began a week-long campaign to vaccinate more than 13 million children against polio.

In April, health authorities identified the first case in 15 months of the highly contagious disease. It is caused by a virus that attacks the nervous system and can lead to complete and irreversible paralysis.

Since then, another 20 cases have been identified, according to the national polio control program.

Facebook
Twitter
Pinterest
WhatsApp
Previous article
Lithuania extends state of emergency on borders with Russia and Belarus
Next article
The “brake” of inflation does not reassure anyone – What the Eurostat figures “show”.