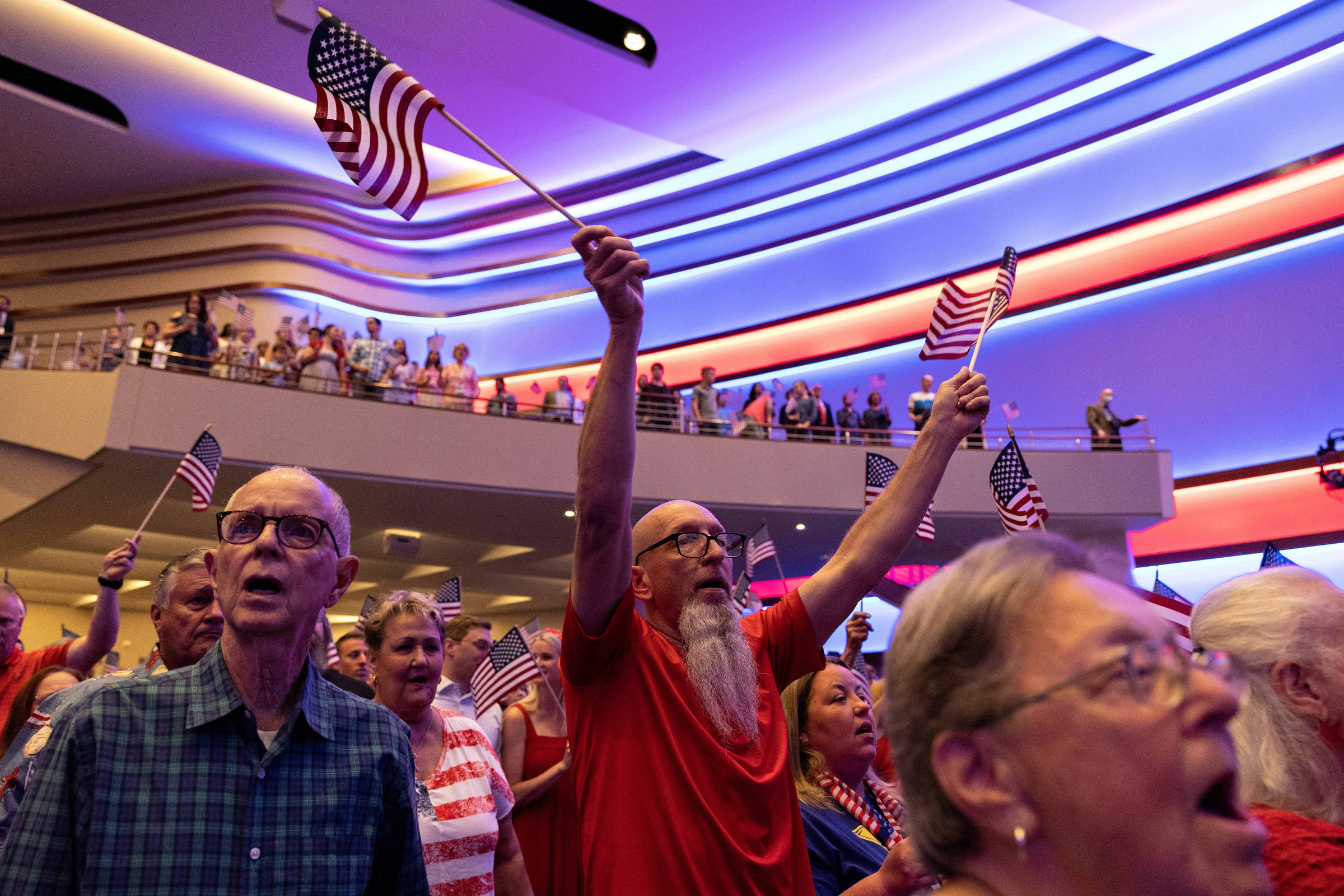 Opinion – Ross Douthat: Christians must become a minority in the US and religion is increasingly Americanized

In September, the Pew Research Center modeled four potential futures for religion in the United States, depending on different rates of conversion and disaffiliation from the country’s faiths. In three of the four projections, the percentage of Christians in the American population, which hovered around 90% in the 1970s and 1980s, has fallen below 50% for the next half century. In two scenarios, Christian participation drops below 50% much earlier, around 2040, and then continues to fall.

This is a potentially historic transition, but what kind of transition? Towards a truly secular America, with John Lennon’s “Imagine” as its national anthem? Or toward a society teeming with new and remixed forms of spirituality, all competing for the souls of former Catholics, former United Methodists, the unchurched wretches?

Ten years ago I published a book entitled “Bad Religion: How We Became a Nation of Heretics” [Religião ruim, como nos tornamos um país de hereges]which offered an interpretation of the country’s changing religious landscape, the sharp decline of institutional faith after the 1960s. Before the book’s anniversary goes unnoticed, I thought I’d revisit the argument, to see how it works as a guide for our society. today more dechristianized.

What the book proposed was that “secularization” was not a useful label for American religious transformation. Instead, I wrote, American culture seems “as obsessed with God today as ever” — still fascinated by the figure of Jesus of Nazareth, still seeking divine favor and transcendence. But these interests and obsessions are much less likely to be channeled through churches, Protestant and Catholic, that retain some connection to historic Christian orthodoxies. Instead, our long-standing national drive toward heresy — toward personalized revisions of Christian doctrine, Americanized updates of the gospel — has finally completed its victory over older Christian institutions and traditions.

The result is a religious landscape dominated by popular Christian ideas that have “gone mad”, as GK Chesterton once put it, “because they have been isolated from one another and are wandering off on their own”. This America has a church of self-love, with prophets like Oprah Winfrey preaching a gospel of the divine self, a “God Within” spirituality that risks turning selfishness into virtue. It has a prosperity church, with figures like Joel Osteen among its bishops, who insist that God wants nothing more for his elect than American prosperity, capitalist success. And there are churches of politics, preaching redemption through political activism — a right-wing Christian nationalism, alternately messianic and apocalyptic, and a left-wing progressive utopianism, convinced that the arc of history always bends in its favor.

These heresies, I argued, are more important to understanding the true influence of religion in America than anything coming out of the Roman Catholic Church or the Southern Baptist Convention. You can understand our spiritual situation more fully by reading “The Da Vinci Code,” “Eat, Pray, Love,” and “Your Best Life Now” than by flipping through a papal encyclical (or, for that matter, an atheist polemic). And you can see more of the enduring but now warped influence of Christianity in the celebrity hymns of will.i.am to Barack Obama in 2008, or the right-wing revivals of Glenn Beck a few years later, than in any cultural authority still attached. to the New Testament or the Nicene Creed.

This was my thesis in 2012. Ten years later, has the structure remained?

In a way, obviously yes. Consider the peculiar phenomenon of Donald Trump, an apparent pagan who somehow managed to take over the leadership of the country’s most religious political party and then be treated by some of its most zealous members as some kind of anointed king.

Trump’s rise was a testament to the strength of major heresies — prosperity theology, self-help religion and a chauvinistic Christian nationalism — within the religious right. Notably, Trump’s main institutional connection to Christianity was his presence long ago at Norman Vincent Peale’s church in Manhattan, at the time when Peale was famous as the guru of spiritual self-realization, author of “The Power of Positive Thinking.”

As a celebrity businessman and aggressive salesman, Trump has become a natural advocate for the more right-wing Peale heirs, gathering kingdom allies from famous pastors and prosperity preachers. Meanwhile, as a tribune of American greatness, he ended up appealing to the more nationalistic parts of evangelism — including voters who were more likely to identify with Christianity as a cultural marker of “Americanness” than to actually attend church.

While Trumpism was being endorsed by right-wing heresies, liberalism in the Trump era ended up being infused with heresy to a degree I didn’t even expect. The idea of ​​awakening didn’t appear on “Bad Religion,” which came before the new wave of campus activism, before Black Lives Matter and #MeToo and the era of diversity-equity-inclusion. But the “Great Awakening” is a perfect example of Christian spiritual energies separated from orthodox belief – a version of Protestant revivalism stripped of Protestant dogmatics but retaining a crusader zeal, a rhetoric of conversion, confession and moral transformation, a sometimes frantic necessity. to cast out the evil and the unclean.

Social justice progressivism has many influences, of course. But it must be understood, in part, as a spiritual descendant of Puritanism, occupying the “locus” of Puritan power (the old Protestant citadels of the Ivy League and the Northeastern American establishment), adapting the old spirit of moral perfectionism to a new set of of issues and demands.

Thus, to both the right and the left, the structure of the nation of heretics still seems useful. But then the question, and the challenge to my thesis now, is just how far can the decline of Christianity go before a term like “heresy” ceases to be analytically appropriate. Because at some point, presumably, Christianity’s influence becomes merely genealogical, and you have to give spiritual experimenters credit for reaching into different religious territory.

A core of Christian practice and belief in this country seems relatively resilient. But the idea of ​​a “nation of heretics” was assumed by many Americans with loose ties to Christianity—churchgoers at Christmas and Easter, people raised with at least some idea of ​​the tenets of the faith. And it is the least affiliated that have grown the most distant in recent years, further attenuating the connections between Christianity and its possible rivals or successors.

When I was writing “Bad Religion” there was still interest in the various “historical Jesus” projects, the scholarly reconstructions that promised to deliver a Jesus more suited to the spiritual assumptions of modern-day America. And there seemed to be a strong cultural incentive to enlist some version of the Nazarene — as Dan Brown did in “The Da Vinci Code,” for example — for his personal spiritual project, to gain Jesus’ blessing for leaving Christian orthodoxy behind.

Today, though, my sense is that Jesus himself is less culturally central, less necessary for religious entrepreneurs — as if where Americans are going now, in their post-Christian explorations, they don’t want or need his blessing.

This shift in priorities doesn’t tell us exactly where they’re headed. But suffice it to say now that the “post-Christian” label fits the general trend of American spirituality more than it did a decade ago.

This kind of change, however, shows the unpredictability of the religious future as much as its inevitability. The Pew report, notably, treats a hypothetical “status quo” scenario — no one changing religions — as its best case for the future of Christianity in America. There is no Christian growth return scenario where a larger share of America is Christian in 2050 than it is today.

I wouldn’t expect a social scientist to predict this kind of reversal. But Advent and Christmas are not about lingering trends, as they once were; they are about disruption, renewal, rebirth. That’s what American Christianity needs now — now as ever, now as in those early days, when its entire future was contained in the mystery and vulnerability of a mother and child.

Facebook
Twitter
Pinterest
WhatsApp
Previous article
Hellinikon in a year from today: The project deliveries, the competitions, the residential redevelopment
Next article
Kyiv will request Moscow’s expulsion from the UN Security Council