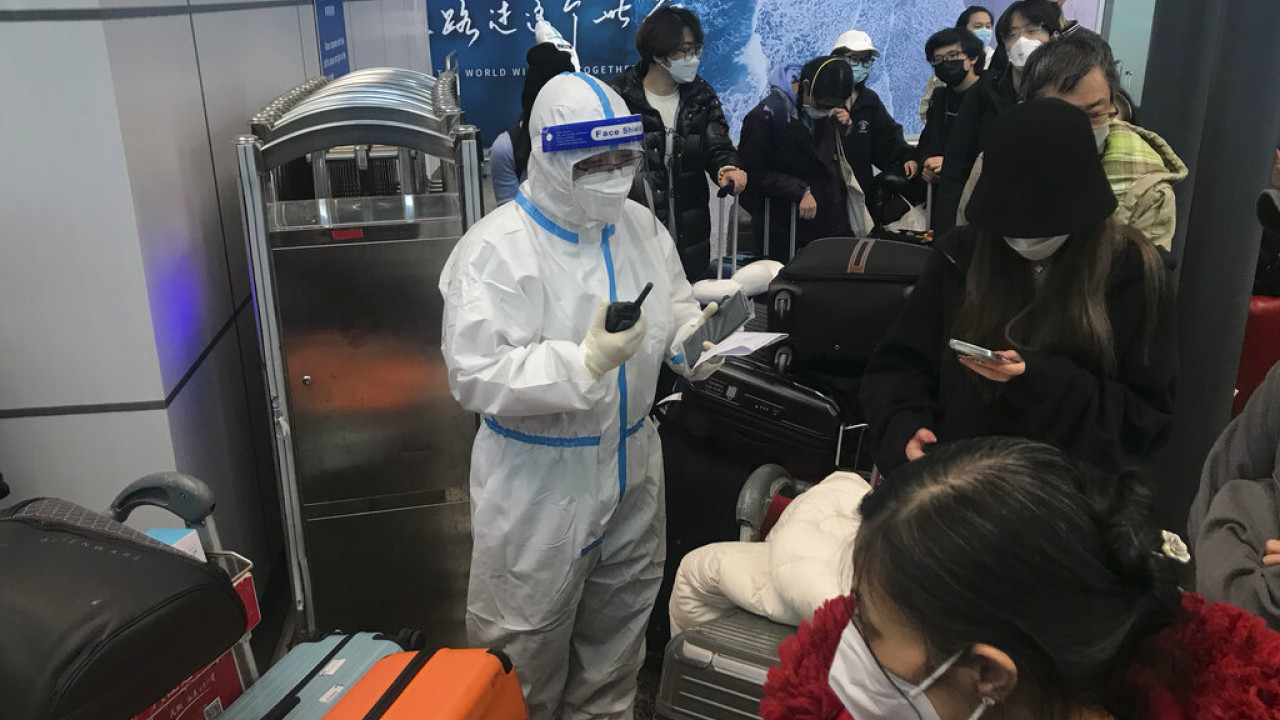 The stupid Commission failed to take measures to prevent the virus in the EU – As China relaxes and opens its borders, the rest of the world places restrictions on travelers from China.

The “outbreak” of the pandemic in China is causing great mobilization at the global level, with the Commission meeting earlier in an emergency. Already, one country after another is taking measures against visitors from China. On the other hand, China is relaxing and opening its borders.

At the same time, there is concern in Europe due to the lack of transparency of the Chinese authorities in relation to the coronavirus, which could result in insufficient information regarding possible new mutations. According to information, however, the BF.7 variant, which seems to dominate in China at the moment, has been detected in Europe for months without raising the alarm or putting pressure on health systems, a fact attributed by experts to high vaccination rates. Earlier today, the EU’s Health Security Committee met to discuss the COVID-19 situation in China, highlighting the need to coordinate national responses to serious cross-border health threats.

However, despite the global concern caused by the new outbreak of coronavirus cases in China, the European Union’s Health Security Committee did not conclude on taking measures to prevent the virus in the EU.

After the meeting, the relevant Commission Committee announced that “the coordination of national responses to serious cross-border threats is critical. We must act together and we will continue our consultations”

Coordination of national responses to serious cross border threats to health is crucial.

Today, the #EUHealthSecurity Committee met to discuss the COVID-19 situation in China with EU/EEA Member States.

We need to act jointly & will continue our discussions.#HealthUnion

Britain and France not reintroducing COVID tests for travelers from China

Unlike the US, Italy and other Asian countries, Britain has no plans to reintroduce COVID-19 tests for those coming to the country, a British government spokesman said today.

“There are no plans to re-introduce tests for COVID-19 or additional claims for UK arrivals,” the spokesman said when asked about a Telegraph report that the government would consider restrictions on arrivals from China.

Yesterday, Wednesday, British Prime Minister Rishi Sunak’s spokesman said that the government will continue to monitor the situation regarding cases of the new coronavirus in Britain.

However, when asked specifically about restrictions on those coming into the country from China, he replied: “It’s not something we’re looking at.”

Britain, led by Boris Johnson when the pandemic struck in 2020, has been criticized for its handling of the public health crisis, accused of being slow to detect cases on arrivals and impose lockdowns compared to other major countries.

In addition, France “does not need to impose border controls in response to the increase in cases of COVID-19 in China,” the head of France’s COVARS health risk assessment committee announced today.

“From a scientific point of view, there is no reason to reintroduce border controls (…) however this could change any day,” Brigitte Autran told French Radio Classique.

The head of the committee noted that for now “the situation is under control” and there are no signs of alarming new variant strains of COVID-19 in China.

USA: Travelers from China will undergo a mandatory test for the coronavirus

US health authorities announced yesterday that travelers from China will be required from January 5 to show a negative test for Covid-19, amid a surge in cases in the sprawling Asian country and concern over Beijing’s “lack of reliable data” on the course of the pandemic.

From midnight on January 5, “all travelers aged 2 years and above” will be required to show a negative Covid-19 test taken within 48 hours before departure from China. The measure applies to flights from Hong Kong and Macau, the statement said.

The US Centers for Disease Control and Prevention (CDC) has expressed concern that the rapid spread of the coronavirus in China could cause new variants of the virus to emerge. “Sampling to count new cases has decreased” in China, a US official said.

Negative tests for Covid-19 (PCR or antigen) must be shown at airline checks upon travelers’ departure. Those who have tested positive at least 10 days before travel will be able to show a recovery certificate as an alternative.

Similar measures have been taken by authorities in several countries — such as Italy, Japan and India — mandating mandatory tests for the detection of Covid-19 on travelers from China.

After easing the strict policy against the spread of Covid-19, China is facing an unprecedented explosion in the number of infections. Hospitals are suffocating and residents are worried about drug shortages.

An explosion of new coronavirus cases in China, as the country lifts its “zero COVID” measures, it could create fertile ground for the emergence of new, mutated strains of the virus, health experts warn.

China just announced the end on January 8 of mandatory quarantine on arrival in the country, which was the last vestige of its strict containment policy that has kept the country largely closed off from the world since the pandemic broke out.

While the government stopped publishing the number of new cases detected in a day, officials in several cities they estimate that hundreds of thousands of people have recently been infected, while hospitals and crematoria are under great strain across the country.

As the virus now circulates freely in China, which has nearly a fifth of the world’s population, several countries and experts fear that the country could become a breeding ground for the emergence of new mutated strains of the new coronavirus. Especially since the Chinese population is still under-vaccinated.

Each new infection increases the chances that the virus will mutate, he therefore estimates Antoine Flao, director of the Global Health Institute at the University of Geneva. “The fact that 1.4 billion people are suddenly exposed to SARS-CoV-2 obviously creates favorable conditions for the emergence of variant strains,” he told AFP.

THE Bruno Lina, a professor of virology at the French University of Lyon said at the same time to the newspaper La Croix that “given the intense circulation of the virus and therefore the increased risk of mutations, a possible breeding ground for the virus could arise from China”.

THE Sumiya SwaminathaN, who was the World Health Organization’s (WHO) chief scientist until November, also said that much of the Chinese population is vulnerable, in part because many elderly have not been vaccinated. “We need to closely monitor any emergence of mutant strains of concern,” he told the paper’s website. Indian Express.

In response to the surge in cases, the US, Italy, Japan, India and Malaysia announced this week that they would strengthen border controls.

The US will claim from January 5th negative test for COVID-19 from all travelers arriving by air from China.

The French government, which affirms that it is “monitoring the development of the situation very carefully”, said it was “ready” yesterday, Wednesday, “to study all useful measures”.

India and Japan will make PCR tests mandatory for all travelers from China, a measure which, according to Antoine Flaocould be a way to circumvent any delay in information coming from Beijing.

“If we can sample and sequence the genomes of all the viruses found in all travelers from China, we will know almost immediately if new mutant strains are emerging and spreading” in the country, he noted.

THE Su Wenbohead of the virus control institute at China’s Centers for Disease Control and Prevention, assured that the country’s hospitals will collect samples from patients and upload sequence information to a new national database, which will allow authorities to track new executives in real time.

More than 130 subtypes of the Omicron variant strain of the new coronavirus have been identified in China in the past three months, the Su Wenbo last week.

Among them are the XXB and BQ.1 and their own sub-types, which have spread across the US and parts of Europe in recent months as a horde of sub-variants jostle for global dominance.

However, BA.5.2 and BF.7 remain Omicron’s key strains found in China, noted Su Wenboadding that the various subcategories will probably be released together.

“A soup” of more than 500 new Omicron subvariants have been identified in recent months, recalled Antoine Flao.

“All variant strains, being more contagious than the previously dominant variant strains — such as BQ.1, B2.75.2, XBB, CH.1 or BF.7 — are certainly a threat as they can cause new waves “, noted the epidemiologist.

“Currently none of these variants appear to carry particular new risks for more severe symptoms, but this may happen with new variants in the near future,” he concluded.