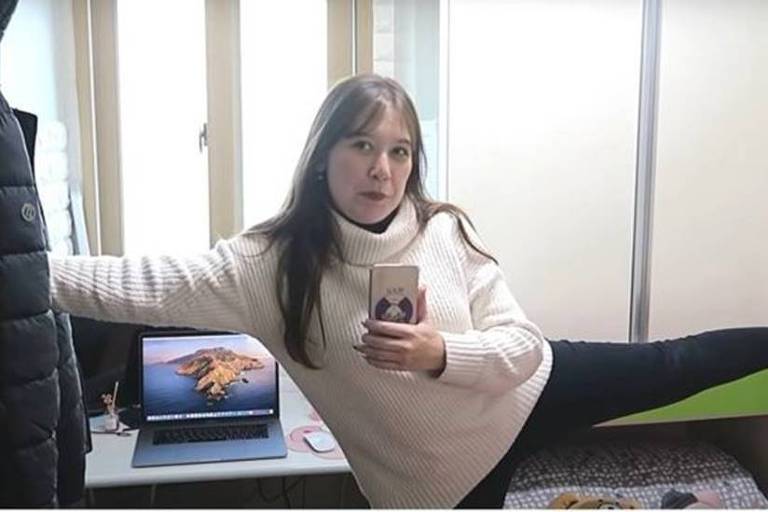 Goshiwon: Brazilian women tell what it’s like to live in a 3 m² micro-apartment in South Korea

Influencer Thais Midori, 27, had her first contact with South Korea 16 years ago with k-pop bands.

At the age of 20, he discovered that he could go on an exchange program to the country and study the language. Since then, he travels to Korean territory every year, always with the intention of exploring the culture. The first time he stayed for six months and then returned during the January and July vacations.

When she got there, she realized that accommodation was very expensive — and one way to save money would be to stay in the micro-apartments known as goshiwon, which are only about five square meters and sometimes three.

“There are everywhere, on every corner. They are mini-buildings and each floor has several apartments”, he tells BBC News Brasil.

Like Thais, influencer and master’s student Amanda Gomes, 30 years old from Ceará, is also an enthusiast of oriental culture. With a scholarship she received in college, she traveled to South Korea and lived there for a year.

Upon returning to Brazil, he decided to go back to Seoul and spend more time there. For this, she made a year-long financial plan and went to study Korean. Accommodations, however, were beyond her budget and she also resorted to a goshiwon. “I lived on the line of survival, and this housing is very cheap here”, says she, who has lived in Korea for four years.

Goshiwons are small houses and much more affordable than conventional Korean apartments. They were designed for students who want to spend a long time preparing for public tenders, who will only use the accommodation to sleep, or for seniors who live alone and cannot afford more expensive rents.

When the tenant chooses to live in one of these, he can opt for apartments with a window, without a window, with a private or shared bathroom. The kitchens and laundry are collective and some floors are divided for men and women.

Amanda’s goshiwon, the cheapest model, had a bed, a door like a closet, a table and a chair. “I’m 1.68 tall, the bed was smaller than me, my little feet were sticking out. The clothes were [penduradas] on top of me, and I had to lie down, because if I sat down, I would hit my head on the pieces”, he recalls, laughing. Amanda says that if she stretched her arms, she could touch the two walls.

“Mine didn’t have air conditioning, only a heater. So I had a fan. Once I got a fever and asked to move to a room with a window for better ventilation”, recalls the woman from Ceará.

Thais’ room was a little bigger, as it had an internal bathroom, a bed and a desk. “I always get it with the bathroom. It’s normal to wet the bathroom every time I go to shower,” she says.

According to the Brazilians, the great advantage of this house is the exemption from “rent-deposit” and a one-year contract. Unlike other Korean housing, which requires an advance payment, the person just needs to have money to pay the rent.

Housing is an alternative for those who do not have as many financial resources and, even so, want to live in the capital, Seoul, and in other Korean cities, according to them.

Due to the price, there aren’t many perks in accommodation like this. The cheaper it is, the less facilities the apartment will have. There are places where, even with a window, the opening faces the corridor and the tenant will never see the street.

“I really don’t see anyone living there because they want to live there, but for financial reasons. At that time, I was quiet and didn’t have financial conditions. God willing I won’t live there anymore, since it’s very uncomfortable, you hear everything and there’s no privacy. You can hear people talking and fighting,” says Amanda.

According to Thais, the biggest problem with his goshiwon was air circulation. In these apartments, who controls the air conditioning and heating, according to her, are the owners of the property, which makes it difficult to adjust the devices if the person feels too cold or too hot.

“I couldn’t take a hot shower even in winter because the room was so humid. Even if I opened the window, there was no wind. The air doesn’t come out.”

She recalls that she asked to turn on the air conditioning for longer and the owner provided a fan. “In the summer it’s very hot. There was a neighbor in Manaus who couldn’t believe it. It’s hot air that surrounds you all the time. In the cold, I had an electric blanket”, says Thais.

Regarding the cuisines, some like the “treats” offered by the goshiwon owners. On site, there are always noodles and rice for the locals. “There were days when I ate ramen noodles and rice. There will always be rice ready in the pot, bags of ramen noodles to make and kimchi [acelga fermentada]”, says Thais.

The Brazilians claim that the prices for these accommodations are reasonable for living in the country. Generally, property prices are exorbitant and it is often better to choose a goshiwon and save money during your stay in South Korea, in their opinion.

“For those who want to travel and spend a long time, like 60 or 90 days, it can be a good alternative”, says Amanda.

It is very common to see signs around the neighborhoods advertising goshiwons, in addition to getting referrals from friends, according to the interviewees. There are also websites that offer this type of property.

However, there are places that can have problems with mold, for example, according to reports. Therefore, the Brazilians say that it is important to visit the accommodation before closing any contract.

It is also common to find these mini-apartments on hosting sites, such as Airbnb, for long or short stays. The monthly fee for the application, for example, can cost US$ 700 (about R$ 3,500). “You have app protection, because when you deal directly with a Korean it is more difficult”, says Thais.

The Brazilians warn that there are cases of finding hair in the bathroom, a sheet that has not been cleaned well and even someone else’s. And they say you need to go with an open mind, as the experience can be quite claustrophobic, according to the Brazilians.

And they recommend that you master a little Korean or go with someone who knows the language, as many owners are elderly and do not speak English or another language.

Another common housing option is apartments that are smaller than the traditional ones, but slightly larger than those of five or three square meters.

They are called one room (one room) — similar to conventional kitnets in Brazil. Some can be up to 10 or 16 square meters. For these villas, however, a one-year contract with a deposit is required.

“Human beings adapt to situations. The issue of space no longer bothers me so much,” says Amanda, who currently lives in one of these and will soon move to a two-bedroom apartment.

Even though they are more expensive than goshiwons, these can also be an alternative for those who have a little more money, but still cannot afford a conventional one or two bedroom apartment. “These are older apartments and sometimes you need to give a deposit of US$ 1,000”, says the influencer.

Currently, the woman from Ceará works creating content on the internet about Korea and is studying a master’s degree in tourism and history, in addition to working for agencies linked to Unesco. She does not intend to return to Brazil. “I work with culture and tourism content and, currently, I work helping Brazilians who want to travel or study in the country”, she says. Thais also has her channels on social networks, where she shares fun facts about the Korean territory.

Facebook
Twitter
Pinterest
WhatsApp
Previous article
Luiz Marinho says that working through an app borders on slavery
Next article
Joelma and daughter are sentenced to R$800,000 for defaulting on an apartment