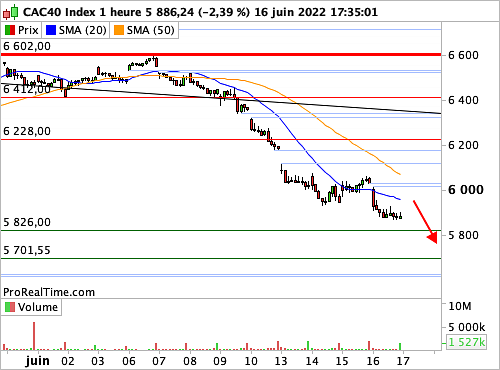 (News Bulletin 247) – In news provided on the front of the decisions of the major central banks of the planet, the CAC 40 lost 2.39% yesterday to 5,886 points, again sinking the highly symbolic threshold of 6,000 points, a threshold above which it had managed to float after the ECB convened an emergency Board of Governors the day before. Obviously the design of the new tools developed will not have convinced. Franck Dixmier, director of bond management at the insurance group Allianz, points out that this press release does not in fact bring anything new compared to what was communicated at the meeting last week. “Handicapped in its ability to raise rates without being hampered by the negative impact of tighter monetary conditions on countries with the most weakened public finances (primarily Italy), the ECB seems to be losing its bearings” , notes the manager. “Much ado about nothing, and a credibility that does not grow out of it”.

As a reminder, on Wednesday, the Fed completed (well after the close in Paris) a new meeting of its Monetary Policy Committee with a 75 basis point increase in its Fed Funds, a scenario which was beginning to be widely priced in by the market, particularly given the latest inflation figures. William Gerlach, Country Manager France at international payments player iBanFirst, notes that this is “the biggest increase since 1994”. “This reflects a sense of panic within the central bank as inflation creeps dangerously close to the symbolic 10% threshold (which should be reached within a few months, according to [iBanFirst]).” As a reminder, the rise in prices has now reached 8.6% in the United States at an annualized rate, energy and food included.

In terms of statistics, the week is definitely complicated. All the major indicators came out below their respective targets on Thursday, whether for the manufacturing index Philly Fed (-3.3), new weekly registrations for unemployment benefits (+229K) or sales of housing and building permits. The only relative advantage that investors can see in this bad series of statistics this week is the hope of a less heavy hand from the Fed at the next FOMC. Pigs already have the date of July 28th.

As for values, only Orange has floated (+0.31% to 10.914 euros) among the 40 flagship values. Engie suffered the biggest fall, yielding nearly 7.3% to 11.322 euros as the group announces that it has seen a drop in gas deliveries after the restrictions on Russian blue gold. Rexel, potential candidate to arrive one day in the index since it joined the antechamber, the Next20, has raised its growth and profitability objectives for this year. But the distributor of electrical equipment, up 3% at the opening, ultimately did not resist the tidal wave, yielding 3.73% to 17.66 euros. The black series continued on Atos (-7.36% to 12.655 euros) still in the wake of the forthcoming departure of its CEO and the project to split the company into two separate listed entities. Since the beginning of the year, it has sunk by more than 66%.

A point on the other risky asset classes: around 08:00 this morning on the foreign exchange market, the single currency was trading at a level close to $1.0430. The barrel of WTI, one of the barometers of risk appetite in the financial markets, was trading around $116.00.

To be followed as a priority on the statistical agenda this Friday, the consumer price index in the Euro Zone, in final data for May at 11:00 a.m. and the federal report on industry (production and capacity utilization rate) at 3:15 p.m.

The sell signals have multiplied since the combination of “evening star” candles (May 27, 30 and 31). The openings successively in bearish gap of the last two sessions of week 23, then of the first session of week 24, were accompanied by a continuous mobilization of the selling side during the session and closing on the low points of the session. All in sharply rising volumes. The momentum of participation will have followed that of the clearings, even as the CAC will have re-entered the lower part at a bearish slant that retains its resistance attributes. The picture is dark. The impossibility of quickly regaining the gaps mentioned, militates for a continuation of the movement. The closing of the day this Friday compared to the low point of the week will be scrutinized, because potentially rich in lessons.

This bearish scenario is valid as long as the CAC 40 index is trading below the resistance at 6000.00 points.