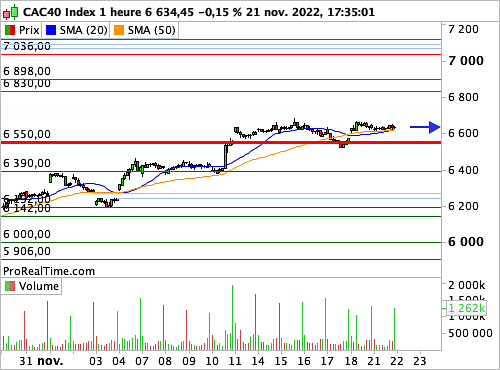 CAC 40: A short flat transition, against a background of intense questioning

(News Bulletin 247) – The CAC 40 index, the benchmark barometer of the Paris Stock Exchange, continued to trace oscillations in thin tidy, close to the 6,600 points, the technical definition of which is current, as questions about the intentions of the major central banks on both sides of the Atlantic intensified. It contracted symbolically at the close on Monday by 0.15% to 6,634 points, under the weight of Total Energies (-3.08%), weighed down by the ebb in crude prices.

While the slowdown in the progression of US CPIs had augured, two weeks ago, a relative easing of the Fed’s monetary policy, the signs of a continuation of the tightening have indeed multiplied thereafter. James Bullard, chairman of the St. Louis branch of the US Federal Reserve, known for his “hawkish” positions, said rates should move above 5% to curb inflation. It is the same observation that was drawn up by Christine Lagarde. The President of the European Central Bank insisted on Friday on the continuation of interest rate hikes to calm the rise in prices.

All against a backdrop of scarcity on the macroeconomic front, with sharp benchmarks becoming rare since the middle of last week. Operators were nevertheless able to learn yesterday of a marked fall, monthly, in producer prices in Germany (-4.2%) where the consensus foreshadowed a slight increase of 0.9%.

Side values, Ipsen has kept the form (+4.90% to 109.10 euros), benefiting from an increase in target price of the bank JP Morgan to 115 euros against 91 euros. FDJ celebrates its three years on the Paris Stock Exchange with a nice rise of 2.99% to 36.86 euros, devoting an excellent stock market performance since its IPO in 2019. Vallourec plunged 13.2% after consuming cash in the third quarter. However, the group confirmed its objectives for 2022 and showed its confidence for the fourth quarter.

On the other side of the Atlantic, the main equity indices ended Monday’s session in red territory, at the dawn of a week that will be largely truncated due to the Thanksgiving holiday. The Dow Jones lost 0.13% to 33,700 points and the Nasdaq Composite 1.09% to 11,024 points. The S&P 500, the benchmark barometer of risk appetite in the eyes of fund managers, fell 0.39% to 3,949 points.

A point on the other risky asset classes: around 08:00 this morning on the foreign exchange market, the single currency was trading at a level close to $1.0260. The barrel of WTI, one of the barometers of risk appetite in the financial markets, was trading around $80.50.

To follow as a priority on the statistical agenda this Tuesday, the manufacturing index of the Richmond Fed at 4:00 p.m.

Note, for holders of positions on the RD: The monthly liquidation will take place at the close of the session on Friday, November 25.

The rally that began on 10/04 resulted in a sharp return to a resistance zone at 6,550 points. The ability to overcome this in high volumes would pave the way for a continuation of this October rally. It is precisely this level that is being redefined, with congestion around 6,600 points. In the immediate term, the inability to create new high points suggests at least a breath. A short corrective phase towards the 20-day moving average (in dark blue) can also take shape at any time.

Facebook
Twitter
Pinterest
WhatsApp
Previous article
Rhodes: “This is how I committed the murders” – The shocking confession of the 45-year-old domestic worker
Next article
The Pyrgos hospital was left without any doctor for 10 hours