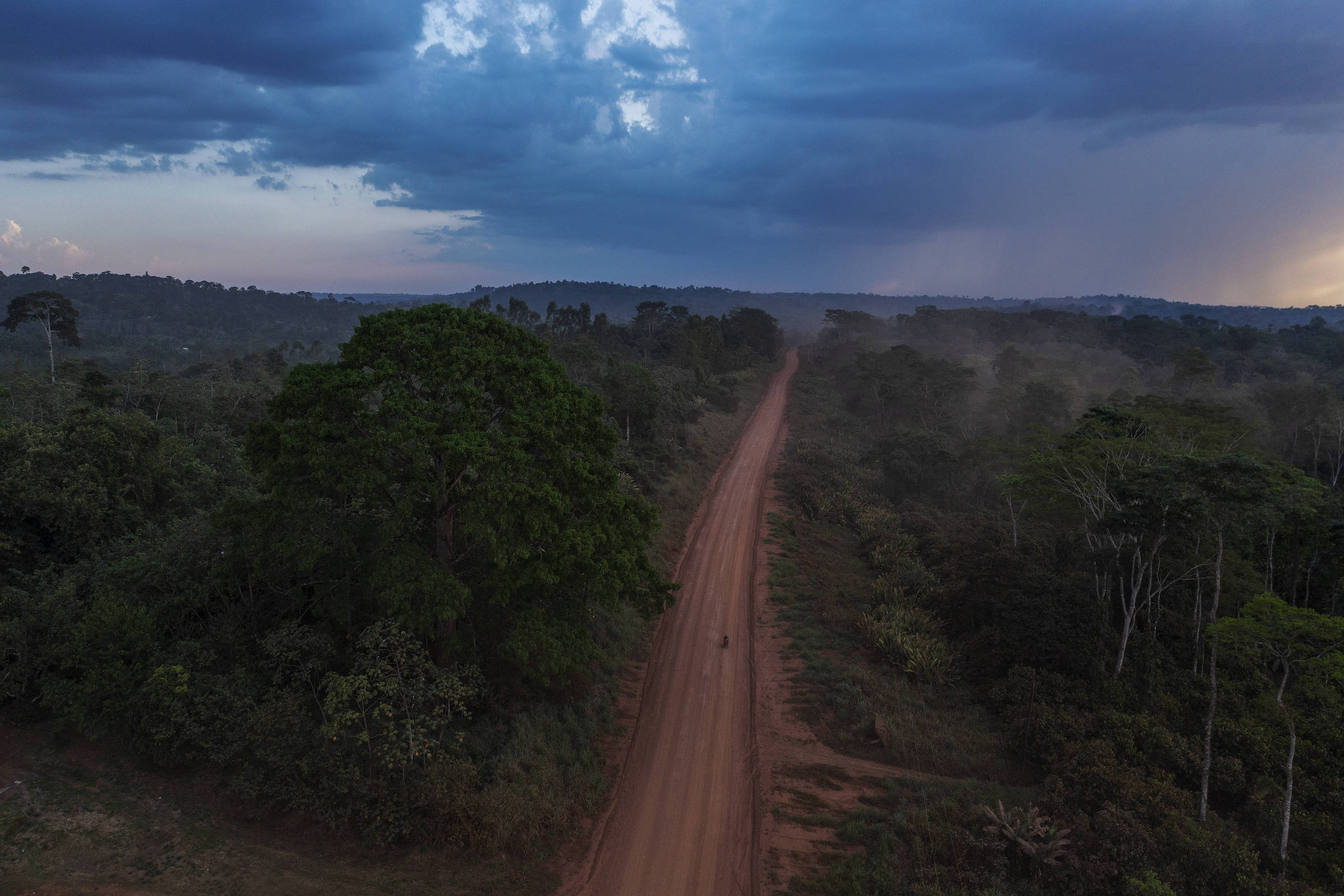 Land fight has gunfire and fires 50 years after Transamazônica

Under a relentless sun in the early afternoon of last Friday (23), children and teenagers from the Sister Dorothy Stang settlement walk between 3 and 5 kilometers on the dirt road to get to school. They follow without smiles, without jokes, silent. They barely look at the cars or motorcycles that pass through the narrow lanes.

School is very simple. It has a single room, is supported by wooden beams and covered with babassu straw. It is equipped only with a whiteboard and 15 chairs.

The path taken by the students is a resumption – although, that afternoon, they went home without classes, for lack of the teacher.

A little over a month ago, the Paulo Anacleto School was set on fire, a crime denounced by the occupants of the lands and attributed by them to land grabbers and ranchers who try to extend domains and take possession of the settlement’s area.

The escalation of the conflicts, with the action of gunmen in daylight, spread panic among the 54 families, whose occupied lots are at the height of kilometer 80 of the BR-230 –the Transamazônica–, in Anapu (PA). All the people with whom Sheet talked, when he was in the place, they asked not to be identified.

The reality of the Sister Dorothy Stang settlement, where everyone feels threatened, shows the results of the policy of occupation of the Amazon implemented by the military of the dictatorship.

The central axis of this policy was to build the Trans-Amazonian highway, connecting the Northeast and the North, and distributing land to small farmers and ranchers who promised to make the spaces “productive”.

Among the farmers and land grabbers behind the attacks on the settlement in Anapu are heirs and buyers of land destined in the context of the emergence of the Transamazônica, according to residents of Irmã Dorothy Stang who closely follow the intricacies of the conflict and the dispute brought to justice.

This process of dysfunctional occupation, with the aggravation of conflicts over land in the Amazon over the decades, has lasted half a century. It was institutionalized after the opening of the first section of the Transamazon Highway, on September 27, 1972 – exactly 50 years ago.

The inauguration was made by General Emílio Medici, then President of the Republic. He moved to Altamira (PA), which is 138 km from Anapu and 830 km from Belém, and inaugurated a 1,253 km stretch of the Transamazônica, between Estreito (MA) and Itaituba (PA). Thus, the “immense path of national integration” emerged.

The very emergence of Anapu takes place in the context of the opening of the highway. BR’s margins were subdivided, and studies show a differentiation in the distribution of lots. Lots of 100 hectares were demarcated along the roadside. On the other hand, plots of 3,000 hectares were delimited at the bottom of branch roads and reserved for farmers with greater chances of “occupation” and “production”.

Over the decades, the occupation policy proved to be an instrument of commercialization and land grabbing. New buyers or occupants began to deforest the areas and occupy them with cattle.

The inadequate allocation of Union lands led landless groups to demand the formation of settlements from the 1990s onwards. Conflicts and gunfire became a constant.

Lot 96 –as the Sister Dorothy Stang settlement was better known– began to exist in 2011, when the first residents arrived. Ninety-six is ​​the batch number of the Bacajá plot, the object of a dispute between farmers and land grabbers.

According to the families, the offensive to retake the place comes from the heirs of Antônio Peixoto, who died in 2022, and from people and buyers linked to these heirs. Peixoto was not the first to receive the neighboring lands; he would have acquired the area from a first owner. THE Sheet could not contact Peixoto’s family members or lawyers for these family members.

Since the beginning of the occupation of the area, the actions of intimidation by gunmen and the setting of fire in the houses of the residents became common. In May, two houses seen from one of the farm’s headquarters were burned.

Armed men in two cars parked in front of the house – which was similar in structure to the school’s – and announced what would happen. They gave the couple and the two children 30 minutes to remove their belongings. They then set fire to it. The residents decided not to return to the settlement, due to the trauma of the children. Remnants of the fire remain at the site.

The second house burned that month had a different dynamic. The resident did not have time to remove his objects. He left with the clothes on his back. Near the burned area, a nursery is tended every day, with cocoa and açaí seedlings. A new house was built, but those who stayed in the area do not know if the resident will return to the place for good.

In August, the attacks were directed at the school, which has the capacity to house 15 students from the first to the fifth year of elementary school – some students are already in the seventh year, but, without transport to other units, they continue to attend Escola Paulo Anacleto.

Residents of the settlement believe that the school was set on fire as a way of demobilizing families, forced to seek classrooms elsewhere. And that happened with some children, taken by their parents to towns and villages where they have double housing.

Burnt chairs remain in the schoolyard. The ceiling was rebuilt, new chairs were placed and classes resumed.

A member of the community reports that dozens of shacks have already been burned. He argues, however, that it is necessary to resist. Another says that if a person is named leader, he can dig his grave.

Less than two months before the school burned down, the Sister Dorothy Stang settlement project was formally created by INCRA (National Institute for Colonization and Agrarian Reform). The act complied with a decision by the Federal Court in Pará for the process to proceed, after action by the MPF (Federal Public Ministry).

There is a request within Incra to revoke the creation of the settlement, which did not materialize, according to the agency.

“The process was redirected to the technical area, to adapt to the act of creating new settlements,” he said in a statement. After this procedure, a family selection process will begin, until the beneficiaries are approved, said Incra.

“Currently, the people who are in the area are considered irregular occupants. Only families that pass the selection criteria of the public notice can be classified as settlers”, said the agency, which said it had no competence over the safety of the area and the families.

According to a member of the settlement, “several farmers are pressing for the repeal of the INCRA ordinance.”

The name Sister Dorothy Stang was chosen for the settlement; the other option was Xingu Resistance.

Dorothy was 73 years old, was an agent of the CPT (Commissão Pastoral da Terra) and was killed in an ambush with six shots, while heading to a meeting of farmers in Anapu, in 2005. She worked on behalf of farmers occupying land in the region.

The CPT reports on rural violence show a predominance of conflicts, aggressions, threats and deaths of indigenous people, riverside dwellers, settlers and landless people who are in areas in the cities of Pará where the most recent paving fronts of the Transamazon Highway pass.

In 5 of 10 cities along 850 kilometers with recent paving, the CPT recorded 36 conflicts over land in 2021, according to the latest report released by the entity. The record holders are Anapu, with 12 conflicts, and Altamira, with 15. The studies for the environmental license of the works already predicted more land grabbing with the arrival of asphalt.

In Anapu, there were records of conflicts both in the then Lot 96 and in other projects formalized by Incra. The region has eight settlement projects and sustainable development projects, according to the INCRA database.

Members of the Sister Dorothy Stang settlement began to place surveillance cameras in strategic locations, as a way of trying to inhibit the action of gunmen. A plaque with the name of the settlement is also being prepared. It is the only condition for some of them to decide whether or not to remain on the sidelines of the Trans-Amazonian.

Facebook
Twitter
Pinterest
WhatsApp
Previous article
Extension until December 1 for disincentives for citizens not registering with a personal physician
Next article
Opinion – Latinoamérica21: Electoral accountability and the quality of democracy in Brazil