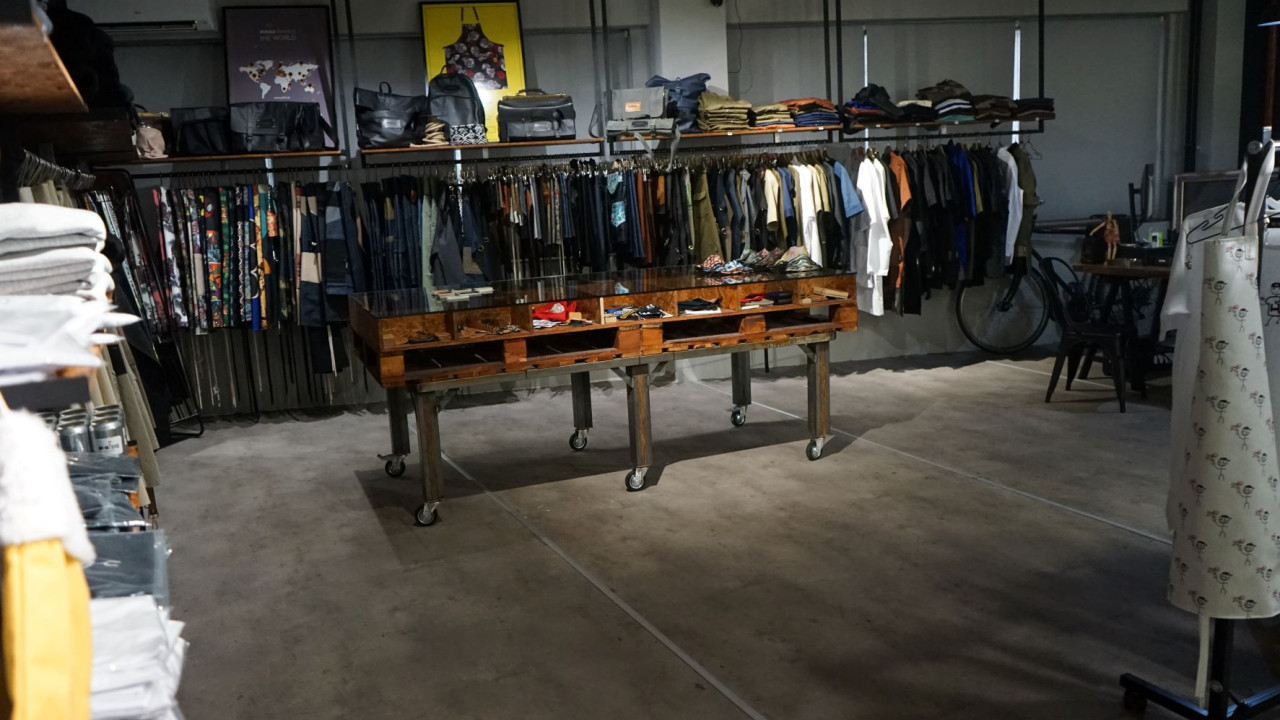 What the originator of the business idea says. From barban he has gone on to make the most original aprons sold in 50 countries

In Auckland, New Zealand, a city more than 17,000 kilometers from Greece and famous for its seaside restaurants and bars and its vibrant Maori community, some professionals ‘wear’ Thessaloniki. Between them a bartender, preparing his cocktails, having chosen a handmade apronmade especially for him, in a town in the Balkans, which he didn’t know existed – until he had to search the Internet, to find a company that creates “custom made” products of the kind.

The New Zealand bartender’s apron was created by the northern Greek company “Pukka”, founded in 2013, whose products are worn by professionals in Europe, America, Australia, Africa and Asia, having reached -even in individual pieces- in 50 countries, as far as Tokyo, Hong Kong, Seoul and Sao Paulo.

The company, which is based on Frankon Street and employs eight people, was founded in 2013, by the bartender Theo Terzopoulos, when he found, looking for a special apron in view of a competition for his work, that he should reach at least until … Canada, to obtain it. He had no knowledge of sewing, nor enough money to buy the first sewing machines, so until “Pukka” started “walking”, and for several more years, he kept his night job as a bartender, initially working until 3-4 p.m. hours a day, in order to balance two “loves”: entrepreneurship and bartending.

“For nine years I worked eight to nine hours in the morning for “Pukka” and almost as much in the evening as a bartender,” 42-year-old Theo tells APE-MPE and explains that exports started in 2015. As useful tools for her extroversion the company’s foreign trade fairs, promotion through social media and acquaintances of friends and acquaintances, who believed in its perspective, worked.

To the question with what initial capital the company started and what was the most important problem it faced, he answers: “Initially we worked with the sewing machines of the Duchess (Dragani). Our first samples were made in the laboratory at her home. Then, when the work started to increase, we invested in two sewing machines, a computer and some tools, which cost around 2500-3000 euros. We found this money from friends and relatives. The main problem we faced at the beginning was the raw materials. It took a lot of effort and a lot of experimentation to find the right fabrics and accessories. We might find a fabric that looked perfect, but when we washed it, we’d find it had a problem, so it might take five or ten trials to get the desired result. The apron is a garment that is worn 365 days a year and is constantly washed, so it needs to be durable”, he points out and adds that the company’s aprons are mainly bought by professionals, but in recent years more and more private individuals, as the shift that occurred during multi-month quarantines in cooking …at home, led many amateur cooks to look for more “personalized” accessories.

How many aprons “come out” annually from Franko’s workshop in the historic center of Thessaloniki, to reach the kitchens and behind the bars of Greece and the world? “We produce an average of 20-25 handmade aprons a day, so 5,000-6,000 a year,” says Teo, adding that the goal is to increase the company’s eight employees (along with the leadership team) so that production becomes more massive ( but anyway not mass, since the question is always the handmade product).

Really, how did the company survive the era of successive lockdowns, when the market it mainly addresses, HORECA (Hotels-Restaurants/Bar-Catering), shrank sharply and radically? “We turned to masks. Initially we used fabrics from our stock. Then we thought if we’re going to do something like this, we’ll do it right. So we started importing a certified anti-bacterial fabric from Switzerland, which we sewed as an inner lining. Masks helped us survive. We sold more than 10,000 in Greece and abroad” informs the founder of “Pukka”, whose “godfather” was Panagiotis Michaelidis, who left his mark at the beginning of the whole concept, before continuing his journey abroad (s.s. .the word “Pukka” means “authentic”. It has Indian roots and is a term used in British slang).

Stamps on ice cubes and buns

Today, the company, whose team consists of Teo Terzopoulos and Christina Adamopoulou (leadership team), together with Eugenia, Stelios, Babis, Kyriaki and Gina, is expanding …”warmly” into another “customized” market of products, that of handmade seals (ice and hot) for ice cubes and pastries, in collaboration with “PaPalina” in Athens, which takes its name from a type of sardine that abounds in the area of ​​Kalloni, on Lesbos.

With these stamps, stores can “stamp” their logo, either on ice or on bread or other baked goods, such as burger buns. “It’s a premium seal in the sense that it’s made of aluminum, whereas what’s on the market is usually made of bronze, which doesn’t have the same food safety features,” Teo points out, adding that personalized products it is a trend that still has a lot to give, in the sense that the consumer, whether he is an individual or a business, loves to acquire products that have something unique.

Facebook
Twitter
Pinterest
WhatsApp
Previous article
Michalis Katrinis: Only PASOK protected the first residence
Next article
“A contract was their weapon!”: The trial for the shootings with an injured person in Gouves