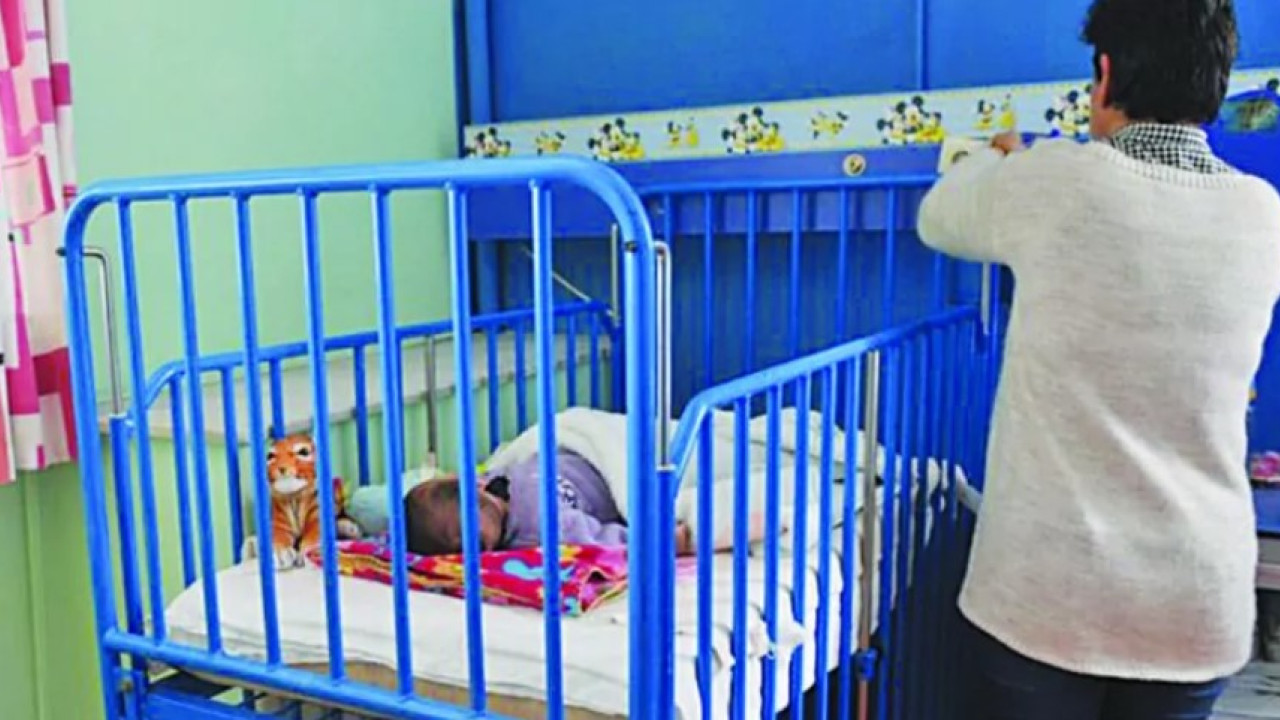 Hundreds of children have lived days, weeks, months and years in the ward of a clinic. A pediatric surgeon in Karamandanio reports tragic stories that have been etched in his memory

The newspaper highlights the tragic stories that the dozens of children who are abandoned in hospitals or admitted to hospitals after a prosecutor’s order due to the lack of structures to accommodate them carry behind them.Peloponnese».
Specifically, at regular intervals wards, both in the Pediatric Clinic of the University Hospital of Patras and in the General Children’s Hospital of Patras “Karamandanio”, are turned into babysitting areas for children who, for various reasons, the public prosecutors have decided should be removed from their family environment or they are abandoned to them by their parents.

Hundreds of children have lived days, weeks, months and years in the ward of a clinic. And on these days in both hospitals, as the professor and director of the Pediatric Clinic of PGNP told us, Gabriel Dimitriouand the director of the Pediatric Clinic, Maria Iliopoulouchildren are accommodated who are waiting for a suitable structure to be found for their transport.

“We are very regularly invited to host children. The prosecutors write the order very easily but this is not easy for us hospitals whose role is different. A hospital ward is not suitable for the stay of a child,” notes Mr. Dimitriou.

“It makes the hospital exclusive or with volunteers mainly from the EEC to have 24-hour guarding of these children. The problem is very big because there are also difficult cases of children with delinquent behaviors that require special care. It is not possible to keep them in a hospital room. Hospitals are not safe havens. These children need a lot of care, psychological support, etc. It’s not enough to find them a roof”, underlines Mrs. Iliopoulou.

Abandoned children in hospitals is a case that did not arise today. It’s years. And this shows that for decades the state and the welfare state has been turning a blind eye. Apparently they were comfortable behind the private initiatives and maybe that is the reason why they have never checked their working conditions. With prosecutorial and ministerial orders, children are admitted to hospitals and institutions without a specialized mechanism for holistic monitoring of their progress and development. As long as they found somewhere to “throw” them. Even state funding is channeled to some without any type of control.

“I NEVER FORGET THEIR EYES”
The pediatric surgeon of Karamandanei, Vasilis Alexopoulossubmits to “P” tragic stories of children which have been etched in his memory.

“Before I describe to you some of the tragic stories I have lived, I will tell you that I always have in my mind what my old manager Theodoros Aivazoglou used to tell me. Santa, these children only have God, doctors and nurses. If we take care of them they will live, if not they will die. And this I have really seen until today in all the corresponding incidents of children both in the pediatrics in Athens where I used to be and now in Karamandanio. We doctors take care of them and the nursing staff feed them, play with them and try to give them a tender hug.”

“On an on-call day, a little boy with mild mental retardation was abandoned in the Emergency Department. We took it and called the police who located the parents. But the mother said that if they took it home she would drown it. So we kept him in the hospital where he stayed for six whole years and then they took him to PIKPA Pentelis. She was the mascot of the hospital. He was embraced by all the staff and the parents of the children who were treated at our hospital. In fact, the prosecutor had given permission and some nurses took it to their homes to change the environment. These hours were the only ones he lived outside the hospital during the six years he lived with us. It had been institutionalized,” said Mr. Alexopoulos.

“I will always remember the little playpen in which a six-day-old baby found refuge. This baby was a “product” of trade. His parents who had come from Bulgaria to sell him to a Greek couple were arrested. But the transaction broke down with the intervention of the police, so they took the baby from the parents. I remember some young policemen brought it to us and they told us that it was crying all the time and there was nothing they could do. The baby, however, had not been changed for hours and was in bad shape. We took it to Aglaia Kyriakou where it stayed for six months until they moved it to some structure.”

“We had two little brothers abused by their father. the older took care of the younger. They were so kind to us. They apologized for the smallest thing. Doctor, sorry, my little brother’s towel fell. You didn’t hear any moaning from their mouths even though they were two very young children. Many times we took lessons from these guys. They had experienced the hardest face of life at their most tender age and yet they had optimism and were happy with the smallest thing.”

“We found another child at the entrance of the hospital with a note from the parents that read: “If you need surgery, don’t do it. Let it die.” Of course we didn’t let it. We operated on it, took care of it and the child was adopted. In fact, his stepmother sought me out to find out about his history etc..”

“DON’T BOTHER ME ABOUT THIS KID”!

“A 10-year-old boy from the “Ark of Love” was brought to us in Karamandanio with a serious history. Before operating on it we had to learn a few things so we knew what we were dealing with. Of course the foundation didn’t know. I tried to call his mother who is a pediatrician in Athens. When I called her her first response was don’t bother me about this kid».

The list of bitter stories of Mr. Alexopoulos is quite long. “No matter how many years pass, I have in front of his eyes the melancholy eyes of sexually abused children. Rushed children have an unprecedented melancholy in their eyes that I don’t know if they can ever get rid of.

Mr. Alexopoulos, in the context of our discussion, raises a gap that exists in our region and concerns the care of children who are accommodated in hospitals. “In Athens there is a network of trained volunteers of the Archdiocese who go to the hospitals and take care of these children. Here we only have some EES volunteers and occasionally from “Smile of the Child”. Most of the time these children are under the supervision of exclusives paid by the hospital. These children need properly trained people next to them who are able to ease their pain and not just feed them or clean them.”