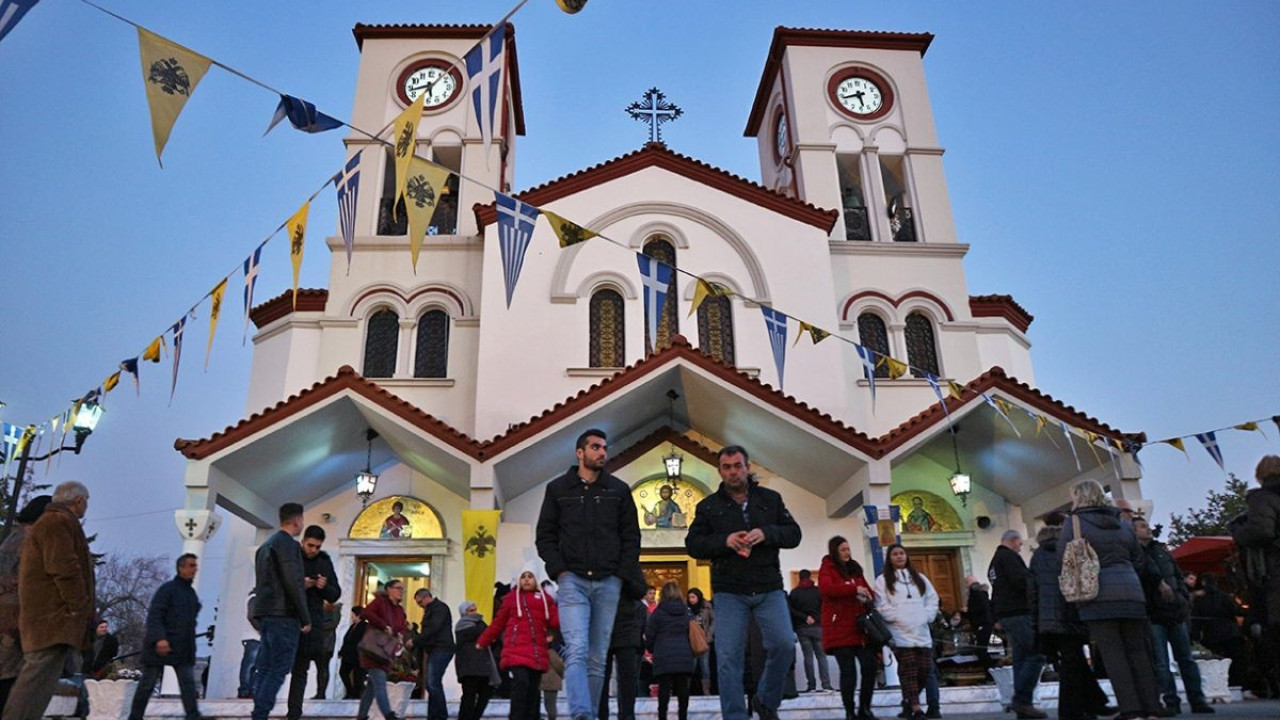 The memory of Saint Gregory the Theologian, Archbishop of Constantinople, is being celebrated this year with all the splendor in the refugee settlement of Nea Karvali, east of Kavala.

Hundreds of believers flock to the holy temple where part of his stage and the bones of his mother are kept, to worship them and take their walk in the great market fair that is set up in the central square of the settlement.

The eponymous pilgrimage church dedicated to the grace of the saint located in the center of the Municipal Community of Nea Karvali is full of the relics brought with them a hundred years ago by the refugees from Gelveri, Asia Minor.

Every year on this day, the refugee Hellenism of Kavala and eastern Macedonia celebrates and remembers, through the testimonies of the oldest, the day when their ancestors left their ancestral homes with tears in their eyes.

These memories, together with the museum of Cappadocian Hellenism that operates today in Nea Karvali, are reference points of the life left behind by the refugees from Girlveri in Asia Minor who settled in Nea Karvali in Kavala.

The relics of Saint Gregory the Theologian are the most important sacred relic that the refugees brought with them, fleeing persecuted from Cappadocia. Of course, the testimonies state that the relics of the saint’s mother, Saint Nona of Nazianzini, are kept in the silver urn (besides, some relics are kept in the Ecumenical Patriarchate and some others in the monasteries of Mount Athos).

However, the long historical tradition and the deep faith of the descendants of the refugees want Nea Karvali to have the entire tabernacle of the Saint.

The church where today the relic of the saint is kept is a faithful copy of the holy church of the church of Saint Gregory located in Gelveri, Asia Minor.

One of the most important testimonies that have survived to this day is that of the late Polyxena Katrantzi, which exists in the Center for Asia Minor Studies and is listed in the publication “The Exodus”, volume II, published in Athens in 1982 and states among other things: “We did the last service. We put in cases the relic of Gregory the Theologian, the icons, the chandeliers and the candlesticks of the churches. As many icons as were old, we buried them in the cemetery. We loaded our things on camels and sent them to Mersina. It was August when we left the village. We got into arrabades and pulled towards Akserai. The Turks of Gelveri were crying and begging us not to leave.

On the road, Turks from the villages of Peristremma, Kotiuk and Kizilkaya came out in front of our Arab and stopped us. My husband used to sell them menifatura verese and they owed us money. After threshing, they paid off their debts by bearing fruit. But what to do with the wheat, since we were leaving! The Turks put bites of pies with cheese and honey in the mouths of my three children and begged them: – Eat and say halal! Rejoice, say helal. They did not want to have a burden on their conscience that they ate the right of my orphaned children. I instructed my children to see the bites and say: – “Helal olsun” (may it be a gift). When the Turks heard this, they hugged and kissed us out of joy. […].

We traveled four days at sea. One day we suddenly see smoke coming out of the hold. The cauldron had burst, as they said. Women screamed and children cried. Others said their prayers. I then say to my father: – Father, I will throw the children into the sea and then I will fall too. Better to drown, become martyrs, than burn alive. Luckily someone plugged the boiler hole. We said then that Gregory the Theologian performed his miracle, because we had his relic with us.

When we arrived in Karaburnou, Thessaloniki, we were quarantined. We stayed on the wire for about two weeks […] From there they took us to Kavala.[…]».

The arrival in the new homeland

In the early years of their arrival in Kavala, the refugees built a chapel for a church in order to put the remains of the saint and the relics they brought with them.

“In a wooden shed, quite spacious, it serves as a community church … holy icons of theological and archaeological value are almost completely destroyed by the humidity, water and snow.[…] On most of the icons he has deposited such a layer of mold that it is impossible to recognize the saint who is depicted on them…”. These were written in 1928 by an eminent Karvaliotis and carried up to this day by the historian and writer Kyriakos Lykourinos.

On September 15, 1929, the current church was founded, and in his address, the president of the Phileducational Association of the Community, Ioannis Dopridis, notes among many others: “[…] Today, exactly five years from the day we inadvertently left our Asia Minor Karvallin, with the holy altars and the tombs of our fathers, the foundation stone of the erected new holy Church of Gregory the Theologian is being laid. Today’s ceremony is […] and in reverent commemoration of our already enslaved holy temple that is there across the Aegean in the highlands of Central Microsia. The newly erected temple […] it will include the saved holy relics after the holy relic of our patron and the sept of the Holy Cross donated by the late Emperor Theodosius the Great and will constitute this holy pilgrimage also in the free homeland […]».

The holy church of Saint Gregory was inaugurated twenty years later, in July 1950.