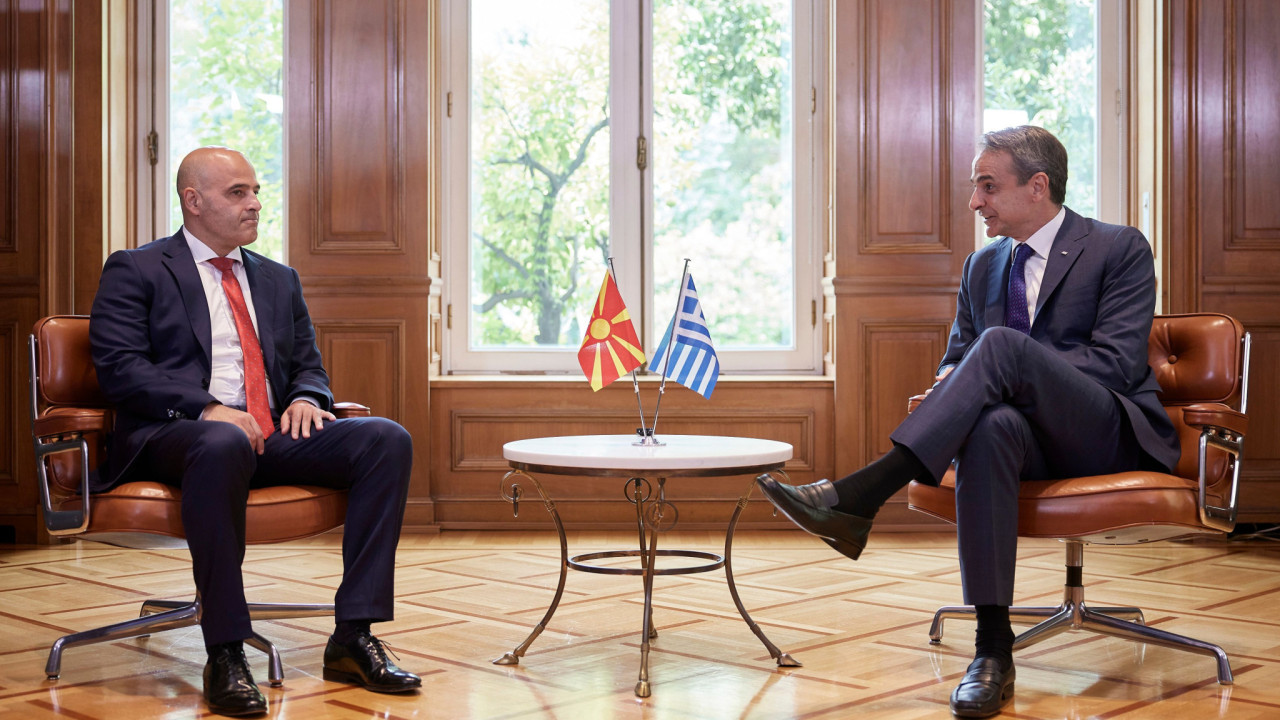 Mitsotakis to Kovacevski: The energy challenges are serious – We will support North Macedonia

The two leaders discussed the prospects of multi-level cooperation in the field of energy and, in particular, in infrastructure matters, as well as the need to diversify energy sources and strengthen interconnection.

At the beginning of the meeting, the Prime Minister and his North Macedonian counterpart had the following dialogue:

Kyriakos Mitsotakis: Prime Minister, dear Dimitar, it is always a great pleasure to welcome you to Athens in these times when we face so many challenges. I take this opportunity to congratulate you and your people on a very successful start in the long process towards your joining the European family. As you know, we have always been in favor of the integration of the Western Balkans into Europe (EU). And this is something that concerns us especially when we talk about one of our closest neighbors.

Today will be an opportunity for us to discuss the serious challenges facing our countries in terms of rising energy costs. I would like to repeat that Greece is ready to support North Macedonia in these difficult times. And I believe that it is in our mutual interest to make investments by Greek companies in North Macedonia in order to connect our infrastructures in such a way that will lead to the increase of energy ties between our countries.

So we have a lot to talk about today. As always, it is our great pleasure to welcome you to Greece.

Dimitar Kovačevski: First of all, thank you very much for making this meeting possible for me. And of course our relations are at a very high level. On behalf of the people of my country, I would like to thank you for the support we received from you in June and July for the opening of North Macedonia’s negotiations with the European Union, which took place 17 years late. Therefore, this is an important day for us and we are building, starting a very intensive negotiation process, in which the help of the already very experienced member states of the European Union, such as Greece, will be valuable for us.

Another important issue, as you mentioned, is the energy crisis that all of Europe and most of the world is experiencing. We have prepared a lot for winter. Of particular interest, however, and of particular importance to us, is that the close ties we maintain with Greece, mainly in terms of the supply of raw materials, the production of electricity in our energy facilities, continue throughout the winter and spring. of 2023. And also to continue the successful Greek investments in North Macedonia, especially in the energy sector.

You know and our people also know that we have already taken the decision to participate in the project for the Liquefied Natural Gas (LNG) terminal in Alexandroupoli. At the same time, studies are underway for the new interconnection line with Greece, which will give my country the opportunity to diversify its energy sources. In addition, the new energy facilities to cover the future needs of North Macedonia are supported to a very large extent by Greek investors. And as we see now, investments worth 1 billion in the energy sector are in the pipeline.

Therefore, as two neighboring countries, I believe that we can be an example of good neighborly relations, not only in the region but also throughout Europe.

During the meeting, the two leaders reviewed bilateral relations and confirmed their will to deepen them.

Emphasis was placed on the great challenge of the energy crisis that the whole of Europe is experiencing. The two leaders discussed the prospects of multi-level cooperation in the field of energy and, in particular, in infrastructure matters, as well as the need to diversify energy sources and strengthen interconnection.

Greece, the Prime Minister stressed, can contribute in this direction due to the infrastructure it is developing on the energy map and its position for the benefit of the region’s energy security, highlighting in this way its leading role in Southeast Europe.

Kyriakos Mitsotakis congratulated his counterpart on the recent convening of the 1st Intergovernmental Conference between North Macedonia and the EU. He confirmed the support of Greece in the accession process of North Macedonia, based on the criteria that have been set, the respect of good neighborly relations and the full, consistent and good faith implementation of the Prespa Agreement, as part of the Enlargement Process.

In the extended meeting that followed, the Greek Minister of Environment and Energy Kostas Skrekas, the Deputy Minister of Foreign Affairs for Economic Diplomacy and External Affairs Konstantinos Fragogiannis, the Political Director of the Ministry of Foreign Affairs, Ambassador Roussos Koundouros, the Director of the Diplomatic Office of the Prime Minister participated in the extended meeting that followed. , Ambassador Anna-Maria Boura, the CEO of DEPA Konstantinos Xifaras, the President and CEO of PPC Georgios Stassis and the Advisor to the Prime Minister for energy matters Nikos Tsafos.

Facebook
Twitter
Pinterest
WhatsApp
Previous article
Macron for Jean-Luc Godard: “The country has lost a national treasure”
Next article
Parliament: The debate has begun on the ratification of the PNP which provides for the “strengthening of the integrity of the EYP”