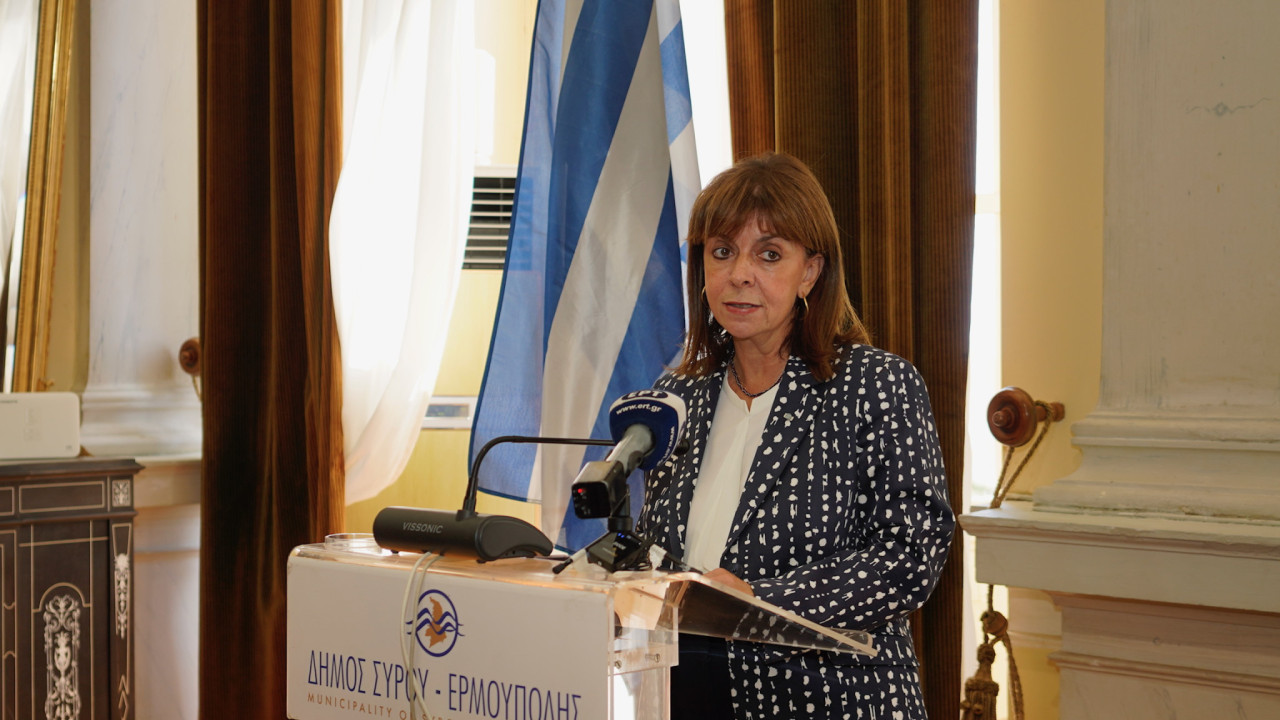 Katerina Sakellaropoulou at the opening of “ANIMASYROS 2022”: A festival with the aroma of the Cyclades

The President of the Republic, Katerina Sakellaropoulou declared its opening tonight “ANIMASYROS 2022 International Animation Festival”, at the “Apollo” theater of Hermoupolis, which is being held for the 15th consecutive year in the capital of the Cyclades and will last until September 25, being the largest International Animation Festival in Greece and one of the leading in Europe.

During her greeting, Mrs. Sakellaropoulou spoke of “a festival with the color and aroma of the Cyclades, which was created from scratch in the heart of the Aegean and over the years developed into one of the most important of its kind worldwide, a magnet for animation filmmakers, professionals and amateurs”.

He also emphasized that he was impressed by the breadth of the subject matter, the variety of media and techniques and the sensitivity of the creators, as they seek to convey strong social messages through a special language that activates the imagination and expands the traditional narrative. “To approach the problems of the modern world – wars, refugees, pandemic, climate change, loneliness, human relations – with a poetic look, boldness, depth” he noted.

Referring to the Baltic countries, which this year the Festival is honoring with an extensive tribute, she recalled that during her recent visit to Estonia, Latvia and Lithuania, she admired the creative fever that prevails in all areas of culture and underlined that she is looking forward to see how the art of animation has evolved there.

“With similar interest and emotion we will also welcome the tribute to modern Ukrainian animation” the President pointed out, as well as “the Greek creations, the film about the sensitive Syrian poet and lyricist Manos Eleftheriou, and the proposals that draw their inspiration from Asia Minor Destruction and hosted in the animation workshops of the educational program. As he observed, “It will be an excellent opportunity to see how young creators manage this deep collective trauma of our recent history and how they bring the lost homelands of Hellenism to life on the screen.”

Finally, he congratulated the management of ANIMASYROS for the perfect organization, the friends and volunteers of the Festival, the coordinators – trainers, the Municipality of Syros-Ermoupolis, the Region of the South Aegean and the Ministry of Culture and Sports, who have supported the institution since 2008 and he closed by saying “It is an aesthetic and spiritual meeting that transports us to a magical world. Let’s enjoy him.”

During the opening, the president of the Festival Vassilis Karamitsanis, the MP of Cyclades Filippos Fortomas, the Deputy Minister of Culture and Sports, responsible for Contemporary Culture, Nikolas Giatromanolakis (recorded message), the deputy governor of Cyclades Giorgos Leontaritis, the mayor of Syros- Ermoupolis Nikos Livadaras, the g.g. of Digital Governance and Simplification of Processes, Leonidas Christopoulos, the vice-chancellor of the University of the Aegean, Dimitris Papageorgiou, as well as the president of the National Center for Optical Media and Communication, Panos Kouanis.

At the official opening of the Festival, the new animation film produced by Animasyros, created for EOT, was presented, as well as the new film of the “Ninety Seconds” series, this time dedicated to the great Syrian poet and lyricist Manos Eleftheriou.

Earlier, the President of the Republic was guided to the exhibition “Seascapes” of the collection of the Bank of Greece, at the Cyclades Gallery.

Tomorrow, Mrs. Sakellaropoulou will visit the Industrial Museum of Ermoupolis and the Cathedral of Agios Georgios in Ano Syros.