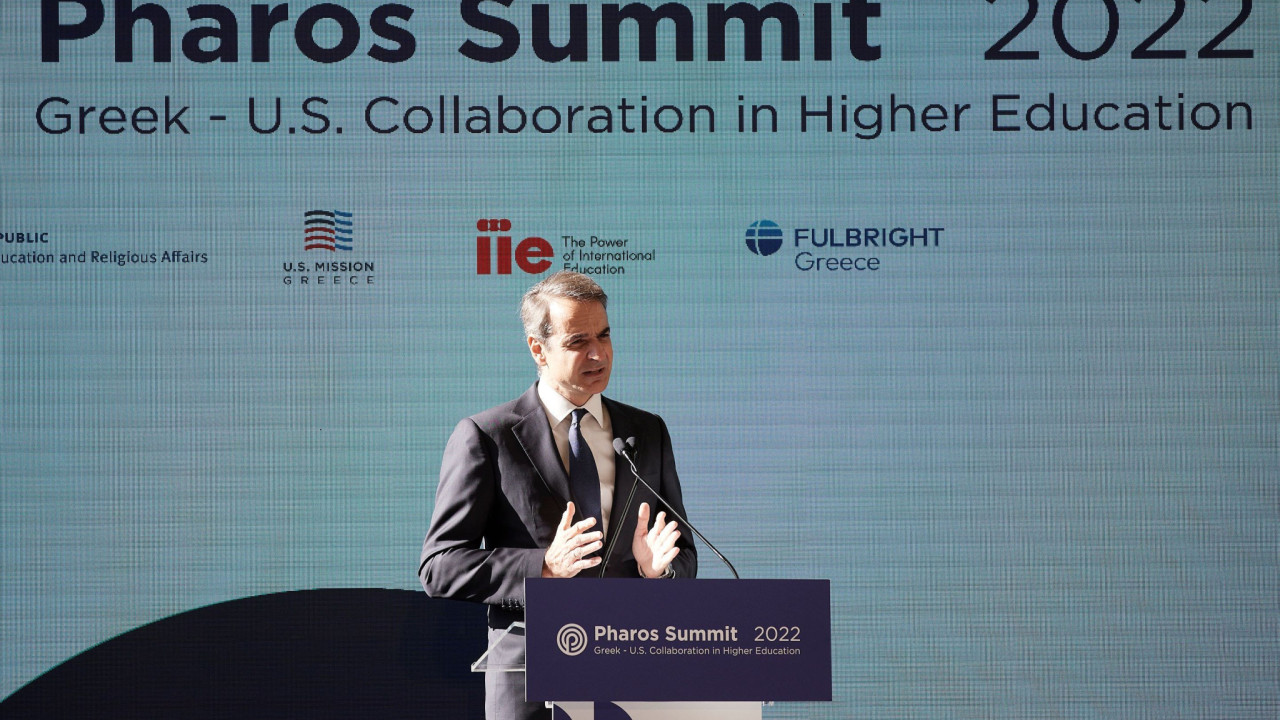 “Greek universities will enter a completely new era. A central pillar of our strategy was to make our universities more open to the world,” the Prime Minister emphasized

The Greece of 2022 is not the Greece of 2012, or 2015. It is a laboratory of constant change, he pointed out on Monday Kyriakos Mitsotakis at the opening event of the “Pharos Summit 2022” on the occasion of the establishment of an International Education Center in Athens by Columbia University.

“Greek universities will enter in a completely new era. A central pillar of our strategy was to make our universities more open to the world,” the Prime Minister emphasized.

Addressing the American teaching staff, Mr. Mitsotakis noted that, “in Greece you will not only find a very friendly countrybut also a government that will be willing to further develop ideas arising from these academic collaborations.”

The prime minister’s speech in detail

It is a great honor to be here with you today. And I can really feel the excitement in the room for what is already beginning to be an extremely fruitful collaboration between academic institutions in the United States and Greek universities.
I have changed my schedule, delayed my departure for COP27, in order to be with you today to share a few simple words about how excited I am about this partnership and how committed we are to ensuring that our universities open up to world and are able to collaborate with the best universities worldwide.

I had the privilege of studying in the United States and worked tirelessly for the last three and a half years, together with Minister Kerameos, to ensure that Greek universities enter a completely new era. A central pillar of our strategy has been to make our universities more open to the world, to strengthen the international partnerships you are discussing today. Many of them have already been agreed upon. Many more will be concluded in the coming days, weeks, months, years, because I believe there is a real possibility to strengthen the academic ties between our two countries.

I believe that Minister Kerameos explained very eloquently the reasons why this is the right time to develop this type of collaboration. What I can tell you is that the Greece of the last three and a half years has changed significantly. Many of you have associated Greece with a country that was constantly in crisis. And you were justified in doing so, as our country has really struggled in the last decade.

It is a country (that is) on the right track, a country that is evolving, with a growing economy, a dynamic society and talented people who are constantly striving for something better. We strive to offer our pupils and students, within the context of public education, the best possible experience in a public free education system. In order to do that, we’ve made sure by law that universities really have the freedom they’ve always wanted to build exactly the partnerships you’re discussing right now. And I think there is probably no better place than Greece for American universities wishing to expand their activity to other parts of the world.

Not only because of the great weather, the quality of life – I’m sure many of you would like to spend more time in Greece, as would your students, teaching or research staff. Not only because of our country’s classical heritage. Greece is not just a place to come and study archaeology, classical studies, history. It is also a laboratory of constant change. It is a country that is in a very critical geopolitical position, a country where, in addition to classical studies, you can focus your research on issues such as migration, security issues, climate.

The Eastern Mediterranean is a region where climate change is unfolding strongly. But Greece is a country whose government is committed to implementing innovative public policy solutions. And those solutions very often stem from the academic work you will produce. Therefore, in Greece you will not only find a very friendly country, but also a government that will be willing to further develop ideas arising from these academic collaborations. I am especially pleased that many of these partnerships have already been announced. I was very pleased to learn yesterday that Columbia announced the establishment of an International Education Center in Greece, which will focus on issues such as immigration and climate change.

And I am sure that many good things will come from this cooperation. For our part, I can assure you that we will remain committed to the promotion of such partnerships, between two countries with very close historical ties.

I have excellent memories of the privilege I had of addressing a joint session of Congress last May. It was an opportunity for me to celebrate the common path of our two thriving democracies, which have stood by each other through very difficult times over the past two centuries. And I believe that the cooperation that we are launching today is another step in this direction, dear Ambassador, Dear George, towards the further strengthening of the ties between our two countries.

I wish everyone a very productive week. I ask you to explore the breadth of talent and creativity that exists in Greek public universities. Those who travel outside of Athens, you will realize that there are many dynamic universities, not only in the capital or in Thessaloniki, but also in other regions of the country.

I urge you to develop relationships with the leadership of our universities, with our professors, with our students. Then you will realize that, at the end of the day, our country’s greatest asset is not its geographical location, its weather, or the fact that it is a natural destination for tourism or foreign direct investment. The greatest asset of the country is its people, especially the younger generation, the creative students who strive for the best, who deserve the best.

We support our public education system with taxpayer dollars and have an obligation to provide our students with the best possible education. And to be able to achieve this, we should be able to work with the best.

Thank you very much for being here. I wish you a fruitful and productive day.”