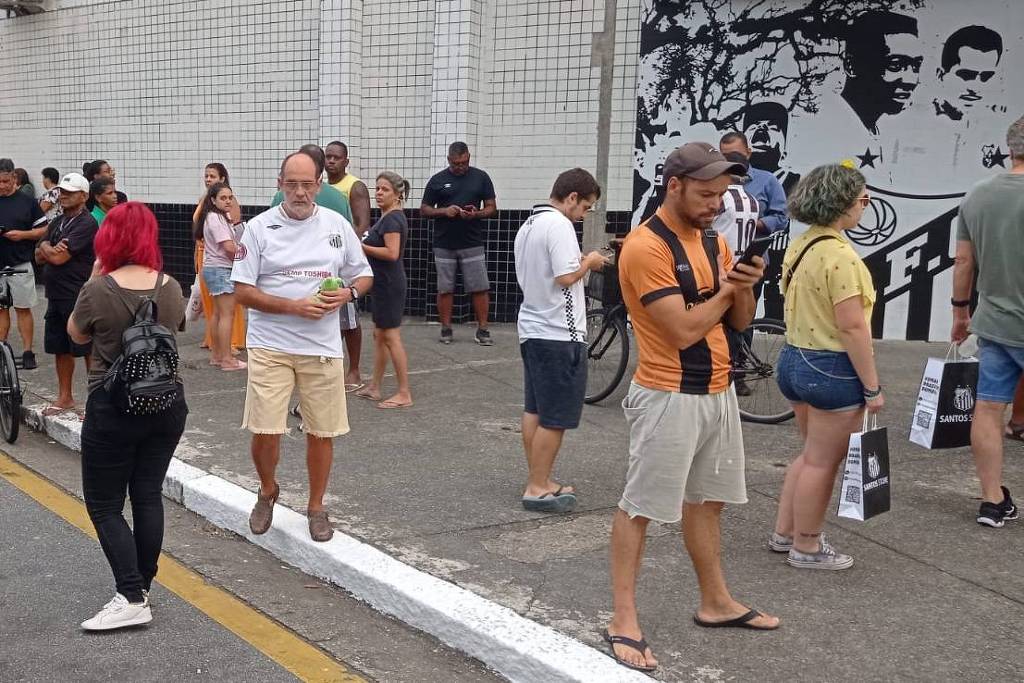 Vila Belmiro, stage of 210 of the 1116 matches played by Pelé for Santos, according to the club’s own historical survey, already receives considerable public movement in its surroundings even with the ex-player’s wake scheduled only for Monday morning (2 ).

Hours after the announcement of the death of the King of Football this Thursday (29), due to the failure of multiple organs due to the progression of colon cancer, hundreds of fans, tourists, journalists and even former historical players of the club gathered looking for the first information. There are also members of Torcida Jovem, the main organized club, with flags and tributes: “Eternal Pelé, you are king”, says one of them.

“We arrived yesterday from Capivari, we rented a house to stay in Santos. We planned to visit the club’s memorial when we heard the sad information on the way. We will extend it until the first days of January, now. This is a historic moment”, said the teacher Sheila Cristina Mello, 40.

Before the information released by Santos about the wake, fans showed photos with the King of Football. It was also common to see children wearing shirts from the São Paulo club and the Brazilian national team.
Retired master Vanderlei de Paiva Lima, 71, proudly displayed two photos next to Pelé while visiting the restaurant where he worked, in the Jardins neighborhood of São Paulo, in the early 2000s.

“Pelé always made a point of taking pictures with us, which was the most curious thing. He even asked, told us to hold his hand”, says Paiva, who has lived on the coast of São Paulo for ten years.

In one of the houses in front of the stadium, former players like Aluísio Guerreiro and João Paulo, who played for the club in the 1980s, also joined the fans asking for information.

They had a meeting scheduled for the club’s masters association, made up of former historic athletes like Lalá, Edu and Clodoaldo Tavares Santana, and they were trying to give Pelé the honorary title of member. The meeting was canceled by the news.

“We received this with great sadness. We were going to get together to talk about the festive games and the tribute to Pelé, who always wanted to visit us. We opened the space a little over a month ago, full of tributes to him. One of them is a card for for him to sign, which we handed over to Pepito (former personal advisor). We are very sorry for the loss”, says Guerreiro.

Pelé’s historic barber, Didi, who still maintains the salon next to Bar do Alemão, one of the best-known strongholds in front of Vila Belmiro, closed his doors when he was informed of the loss of his friend.
“I’ve had this shirt since 2002. Pelé autographed it. I’ve already been offered R$2,000, R$3,000… I don’t sell it,” says Sandro Justino, 65, a retired port operator, who carried a shirt with the dedication of the King of Football on his shoulders. .

The farewell operation for Pelé, the greatest player in football history, has been worked on by the club for months – despite his recent death. In the last week, a series of videos have gone viral on social networks of a structure for the wake being set up in the Vila. Santos did not comment on the matter.

Despite the presence of the public, who will be able to say goodbye to the King of Football, the ceremony must take place in a sealed coffin, with strict security protocol. The forecast is for it to start at 10 am (Brasília time).

There will also be a procession through the streets of Santos, which will pass through Channel 6, where Pelé’s mother, Celeste, who this year turned 100 years old, lives. The burial reserved for family members will be at the Ecumenical Necropolis Memorial, on Tuesday morning (3).

The accesses for the ceremony were defined with gate 1 for the entrance to flower shops. Afterwards, wreaths of flowers will be placed on the side chairs of the stadium.

Fans will be able to enter through gates 2 and 3 of Vila Belmiro, the main ones, and will follow, in single file, until they approach the place where the coffin will be positioned. Like the funeral of Queen Elizabeth II, people will not be able to stop. They will leave through gates 7 and 8.

In aerial photos, it is already possible to see two tents set up in the center of the lawn where Pelé said goodbye to the club in a match in front of Ponte Preta, in 1974, kneeling on the lawn.

In one of the accesses, only family members, some authorities —such as a possible presence of the President of the Republic—, in addition to idols from Santos Futebol Clube will be able to enter. It was not informed by the club what it will be.

At gate 10, the Salão de Mármore, there will be members of the Deliberative Council, politicians and guests. At gate 20, journalists who will need to go through prior accreditation for coverage will be positioned.