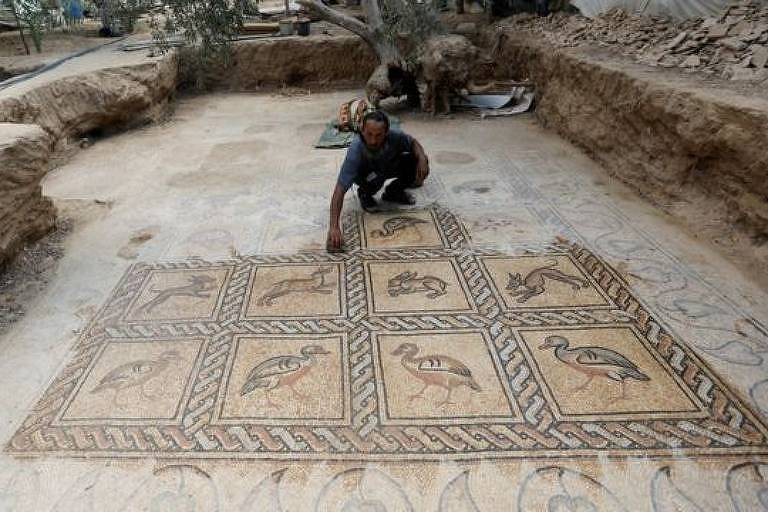 Archeology: the millenary mosaic discovered in Gaza by a farmer planting a tree

Salman al-Nabahin said he and his son were digging the ground when they dug up the relic.

Experts consider it one of the greatest archaeological treasures ever found in Gaza.

Nabahin told Reuters news agency that he realized the mosaic belonged to the Byzantine era after searching the internet.

The Byzantine Empire was the eastern half of the Roman Empire, which can be traced back to 330 AD, and existed for over a thousand years.

“I see it as a treasure, more precious than a treasure. It’s a Palestinian legacy,” said Nabahim.

Archaeologist René Elter of the French School of Biblical and Archeology in Jerusalem told the Associated Press that the mosaic is “exceptional”.

“These are the most beautiful mosaic floors discovered in Gaza, both for the quality of the graphic representation and the complexity of the geometry,” he said.

“Never before have mosaic floors been discovered with such delicacy, such precision in graphics and richness of color in the Gaza Strip.”

The Palestinian Ministry of Tourism and Antiquities said international experts are being brought in to complete the excavation of the site.

The Gaza Strip was once a busy trade route for different civilizations. It is a region rich in antiquities.

Facebook
Twitter
Pinterest
WhatsApp
Previous articlePalmeiras wins Santos and continues with a good advantage at the tip of the Brazilian
Next articleCosta Rica: Nine dead in a traffic accident caused by bad weather