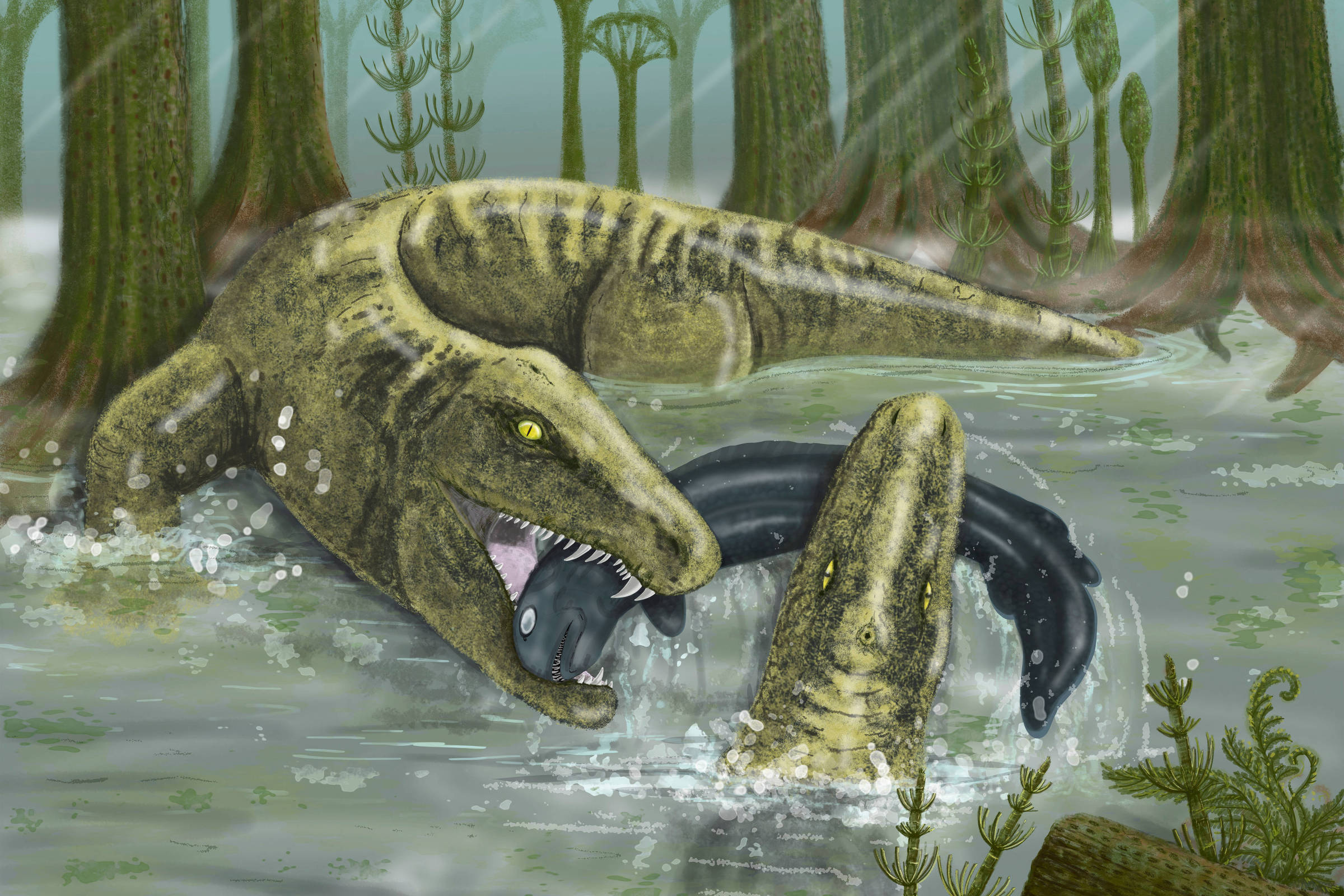 It looked like a cross between a crocodile and a salamander—and definitely not an animal to be toyed with. Long before dinosaurs or even the advent of the first true amphibians and reptiles, a unique creature called Whatcheeria it was a true apex predator.

New research is offering a deeper understanding of the Whatcheeriawhich lived about 330 million years ago during the Carboniferous period and arose during a phase of evolutionary experimentation and innovation that occurred tens of millions of years after vertebrates conquered Earth.

After a thorough examination of its fossilized bones, scientists were surprised to discover that the Whatcheeria it did not follow a slow, steady growth pattern during its lifetime, like many modern reptiles and amphibians, but grew rapidly as a youngster, like birds and mammals.

O Whatcheeria it was one of the first tetrapods, as the first vertebrates —animals with a backbone— on land were known. These were the predecessors of today’s land vertebrates—amphibians, reptiles, birds, and mammals. Spending much of its time in lakes and rivers, the Whatcheeria it reached about two meters in length, making it the biggest aggressor in its environment.

“It wasn’t a slow, lazy amphibian. It was an active predator that grew extraordinarily quickly in its juvenile stage,” said paleontologist Megan Whitney of Loyola University in Chicago, lead author of the research published in the journal Communications Biology.

O Whatcheeria is known from almost 400 fossils unearthed near the small town of What Cheer (hence the name of the animal), in the state of Iowa (north-central USA).

“He it is characterized by a large skull full of teeth and robust limbs,” Whitney said. “It was the apex predator of its environment, which included different types of ancient fish and sharks, as well as other smaller primitive tetrapods.”

“It’s a wonderfully strange beast,” added study co-author Ben Otoo, a doctoral student in paleontology at the University of Chicago’s Committee on Evolutionary Biology and at the Field Museum, which holds the remains of Whatcheeria in your collection.

“You would probably think it was an alligator if you saw it, or maybe a large salamander. It had no scales and its skull was tall and narrow rather than flat.”

Unlike many early tetrapods—and most extinct species of any animal—the fossils of Whatcheeria were retrieved at different points in the animal’s life cycle.

“The bones act like storybooks, recording information about the animals while they are alive. And one of the important pieces of information recorded is how fast the animal grows,” Whitney said.

A microscopic examination of slices of thigh bones from nine individuals Whatcheeria revealed patterns of bone growth over time.

“An important finding of this research is that we identified fast-growing bones in young Whatcheeria🇧🇷 This is important because it indicates that this animal’s growth strategy was similar to ours: growing fast while young and slowing growth as it became an adult,” Whitney said.

“While this sounds simple enough, the strategy has long been considered a specialized feature of warm-blooded animals such as mammals and birds. However, what we can show here is that the strategy was used even in the early stages of our evolutionary history. “, added the paleontologist.

This growth strategy implies that the Whatcheeria had a high metabolism, Otoo claimed.

“We think the Whatcheeria it could have employed a variety of hunting techniques,” Whitney said. “It certainly could have been an ambush predator, using its stout limbs to propel an attack on aquatic and terrestrial prey. It’s hard to say for sure how much time he spent on land versus in the water. However, what we can say is that his anatomy might have allowed him to walk on land.”

The first tetrapods went extinct as the first true amphibians and reptiles asserted their dominance. “I think the Whatcheeria it’s a great demonstration that evolution is not linear,” said Otoo.