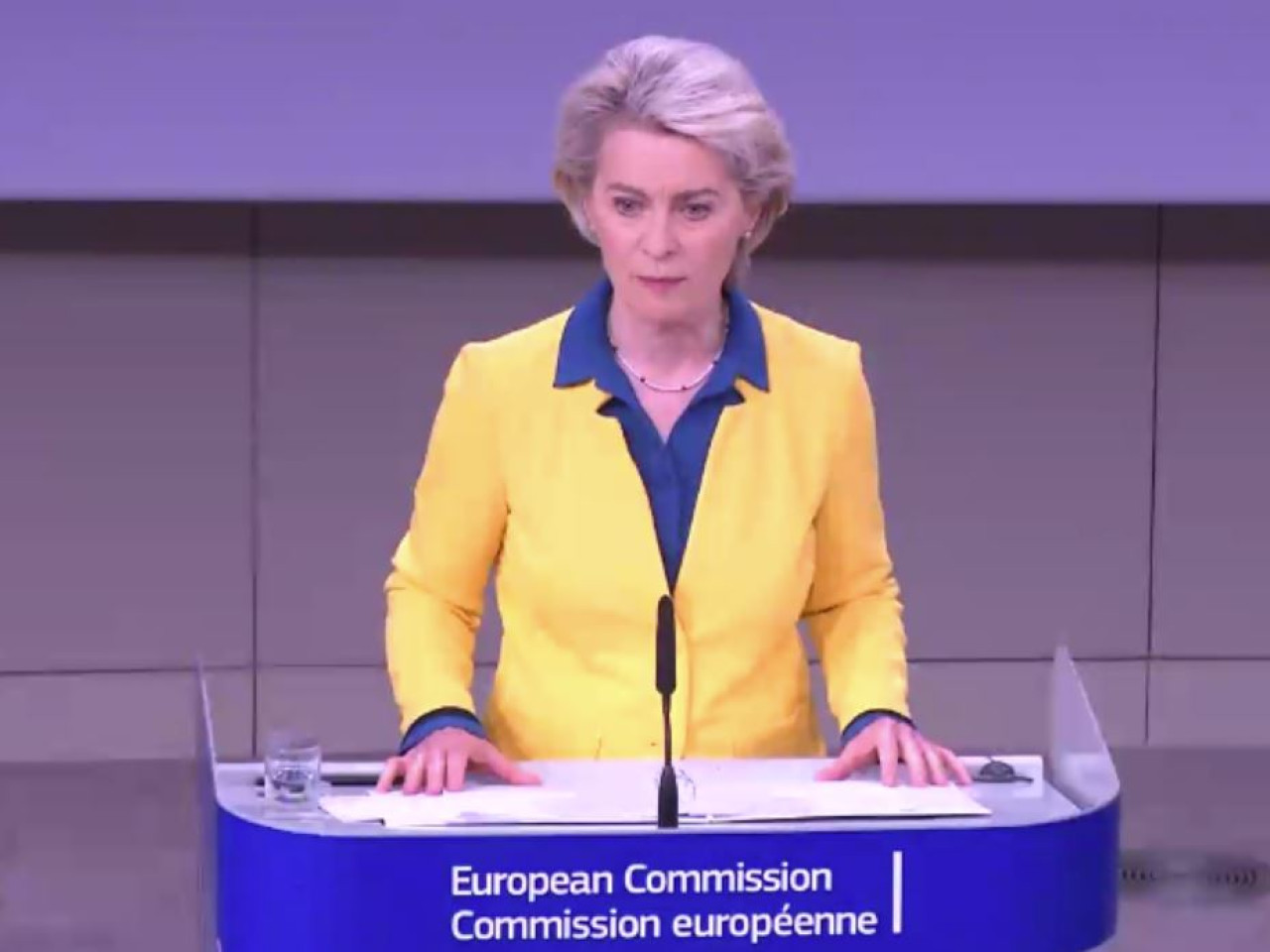 Commission: ‘Yes’ to Ukraine and Moldova for candidate status

The announcement by European Commission President Ursula von der Leyen came a day after a visit by the bloc’s most powerful leaders to Kyiv in support.

The Commission gives the green light to Ukraine and Moldova to receive the status of candidate country for their accession to the EU.

The announcement by European Commission President Ursula von der Leyen came a day after the bloc’s most powerful leaders visited Kyiv in support: “The Commission is proposing candidate status for Ukraine,” Ursula von Lyon said. , noting, however, that there are still steps to be taken in areas such as the rule of law, the fight against corruption and fundamental rights.

In fact, social media is commenting on the clothing choice of Ursula von der Leyen, to make the announcement, who wore a yellow jacket and a blue shirt, the colors of the Ukrainian flag.

The clue was in Ursula von der Leyen’s outfit. pic.twitter.com/v0rn0mXyJp

Ukrainians are ready to die for the European perspective.

We want them to live with us the European dream. pic.twitter.com/3SPRqkgK7l

“Regarding the rule of law, Ukraine has made great strides in creating the necessary institutions for the efficient functioning of the judiciary and the control of prosecutors. The selection of judges of the Constitutional Court, as well as members of the Supreme Council of Justice, must now be accelerated. With regard to the fight against corruption, Ukraine has made great strides in setting up the necessary anti-corruption bodies. The focus should now be on the appointment of the new head of anti-corruption prosecutors and the new director of the anti-corruption investigation bureau. “The anti-corruption bodies must be fully operational,” said von der Leyen.

“As far as the oligarchs are concerned, Ukraine has adopted a bold law against the oligarchs. In fact, it is the only Eastern Partnership country to have done so. “Now, it is a matter of implementation,” said the President of the Commission.

“Yes, Ukraine deserves the European perspective,” von der Leyen said, adding that “good work” has been done, but there is still “important work” to be done.

Regarding Moldova“Our assessment is generally going in the same direction as for Ukraine,” he said.

The Commission recommends that the Council grant Moldova a European perspective and candidate status “with a view to carrying out a number of further important reforms,” ​​Ursula von der Leyen said.

She added that Moldova has taken a decisive step towards reforms, with a clear mandate from its citizens and is on track to reform. However, he noted that Moldova still has a long way to go.

As the President of the Commission explained, the economy and public administration in particular require significant improvements.

About Agriculture Finally, the European Commission recommends that the Council grant it the European perspective, but return and assess whether Georgia meets certain conditions before granting it candidate status.

Yesterday at a press conference from Kyiv by the leaders of France, Germany, Italy and Romania were in favor of the “immediate” return to Ukraine of candidate status for membership of the European Union.

For his part, Emanuel Macron reassured his Ukrainian counterpart Volodymyr Zelensky: “Europe is by your side, it will remain so for as long as necessary.”

EU leaders must decide at the June 23-24 summit whether to grant Ukraine candidate status, the first step in a process that could take years. The European Commission is due to announce its recommendation on Friday.

Regarding the heavy weapons that Kyiv has been demanding for weeks to face the Russian attack on Donbas, Emanuel Macron announced that France will deliver to Ukraine an additional six self-propelled guns Caesar. “Apart from the twelve Caesars that have already been delivered, I have made the decision to send six more,” Macron said after talks with Zelensky.

Earlier, Chancellor Olaf Solz requested from Kyiv to grant candidate status to join the European Union in both Ukraine and Moldova.

Zelensky: Ukraine ready to work to become a full member of the EU

Ukraine “ready” to work to become a “full member” of the European Union, he said today Ukrainian President Volodymyr Zelensky at a press conference in Kyiv with his counterparts from Germany, France, Italy and Romania.