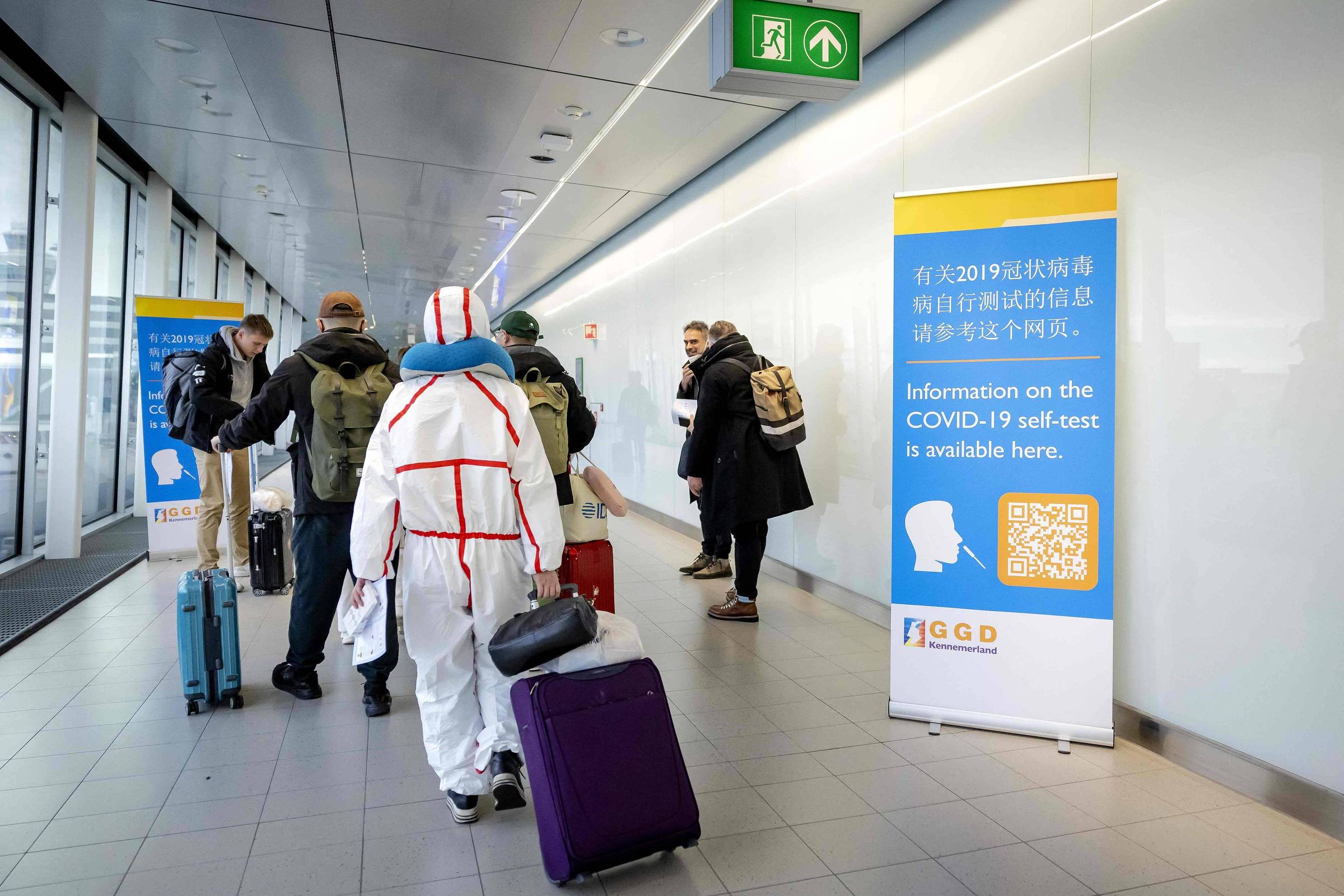 Upon landing, passengers are greeted by staff in full protective gear and subjected to Covid tests. Those who test negative are taken by bus to a quarantine facility, where they stay for at least five days — and where 14-year-olds can be separated from their parents. Even released, travelers are tracked through a digital health pass. Diagnosis of the virus forces him to stay in a detention center for the sick.

This is the experience of traveling to China — at least it was, until this Sunday (8), the date on which the country finally reopens its international borders. The blockade was one of the last remnants of the controversial zero Covid policy, established by the regime at the beginning of the pandemic, in 2020, and largely relaxed last December, somewhat abruptly, shortly after an unprecedented wave of protests.

Now, the protocol determines that international passengers only show a Covid test with a negative result, obtained up to 48 hours before boarding. Quarantine is waived.

The border with Hong Kong will also reopen this weekend, and ultra-fast trains linking the island and the mainland will start operating again in the middle of the month – close to the country’s main holiday, the Lunar New Year, when an estimated 2 billion Chinese must travel, including abroad.

The end of travel restrictions comes amid the explosion of Covid that followed the end of the rigid control of the pandemic by the State – a strategy that also included large-scale confinements, limits on locomotion and frequent tests. Authorities have stopped releasing detailed infection data, but the British company Airfinity Daily estimates that China now registers about 2.5 million cases and 16,000 deaths a day. The regime states that the total number of deaths from the disease since 2020 is 5,259.

The data blackout hasn’t stopped reports of chaos in the health system from flooding the Western press in recent weeks: doctors have been forced to work even when infected, health facilities are full, funeral homes and crematoria have seen increases in demand.

The situation is especially worrying for the elderly — only two-thirds of those over 60 are vaccinated with a booster dose. Chinese immunizers, based on inactivated virus technology, also generate lower immunity compared to messenger RNA developed in the West – and not adopted by Beijing.

Meanwhile, countries such as the USA, France, the United Kingdom and Israel began to impose restrictions on the entry of Chinese tourists – something classified as “simply irrational” by Beijing, but understandable by the WHO. This is because the fear of the emergence of new variants is growing, since high rates of transmission of the virus increase the risk of exchanging genetic material between strains, according to the infectologist Plínio Trabasso, a professor at Unicamp.

Even so, the announcement of the reopening of borders was received with enthusiasm by the economic sector. Ronnie Lins, director of the China-Brazil Center, sees the situation as an opportunity to strengthen the global market, which today suffers from recession and unemployment in many important economies and with generalized price increases.

With the metaphor of the Asian giant as the “engine of the world”, Lins says that the resumption of factory production increases the demand for commodities, which would benefit emerging countries like Brazil. In addition, the regularization of the supply of inputs promises to stabilize several sectors.

Researcher at Fudan University in Shanghai, Karin Vazquez recalls that the reopening gives Beijing the opportunity to rebuild its own economy in an unstable geopolitical moment. She says that the period of Covid zero led to the lowest investor confidence index in a decade and that between 10% and 15% of foreign companies left the country. China’s GDP grew by close to 3% last year, when the official target of 5.5% – a drop of about US$ 500 billion.

For Vazquez, the end of isolation can still help rescue the country’s image in the world, in a way strengthening the Communist Party and leader Xi Jinping, who recently confirmed an unprecedented third term. “But it will all depend on how the virus evolves and China’s ability to respond.”

In this sense, there are three possible scenarios. The first, optimistic, is that the increase in cases and deaths observed now is punctual and that by the second quarter the situation will stabilize, with benefits for the local and global markets — and directly for Xi.

The second, more realistic, predicts almost 1 million deaths from the coronavirus – the prognosis was released last month by the Faculty of Medicine of the University of Hong Kong and is close to that of a model published in the journal Science. The figure, which represents 0.07% of the country’s total population, would make China closer to the US, world leader in the ranking, in number of victims.

“It is the most populous country on the planet, and if even 1% of people die is an obscene scale. We cannot naturalize this”, says infectologist Jamal Suleiman, from Hospital Emílio Ribas.

On the economic side, Alicia Garcia-Herrero, chief economist for Asia-Pacific at investment bank Natixis, considers that massive impacts on China-dependent supply chains would only happen if the commotion over the deaths provoked a new large-scale popular mobilization.

But this is unlikely, given recent Chinese history, according to Maurício Santoro, a political scientist and professor of international relations at Uerj (State University of Rio de Janeiro). By way of comparison, it is estimated that the Great Leap Forward, Mao Tse-tung’s plan to accelerate industrialization in the late 1950s, and the Cultural Revolution, which sought to eliminate bourgeois deviations between the 1960s and 1970s , resulted in the deaths of up to 40 million Chinese.

Finally, the third scenario imagines that the high rate of transmission in China today leads to the emergence of an alarming new strain. It would not be more aggressive by itself, since, as Suleiman points out, the evolutionary tendency of viruses is for each new mutation to decrease their lethality, since they depend on their hosts to survive.

But the variant could either be more infectious or, at worst, escape current vaccines. “If that happens, this whole wall [de proteção] it could collapse”, he says. “China puts everyone on alert to detect any abnormality as early as possible.”

The problem is that a totalitarian regime, without political opponents or freedom of expression, makes it difficult to disseminate information of this type. “This pandemic is, among other things, an X-ray of the social and political problems of each country. In China, this issue is authoritarianism, which potentiates the negative effects of an inadequate response to Covid”, says Santoro.

“It may be that the situation over there becomes serious enough for the Chinese regime to ask for international help. But will this really happen? Or will the authorities try to mask this data and continue to cling to a vaccine nationalism?” It’s political issues that, since 2020, have made it difficult to fight the pandemic.

Facebook
Twitter
Pinterest
WhatsApp
Previous article
ERT journalist Dimitris Petyhakis “left” – The “goodbye” of the state channel
Next article
Netherlands: New summons of Iranian ambassador by the government, after the hanging of two men by Tehran