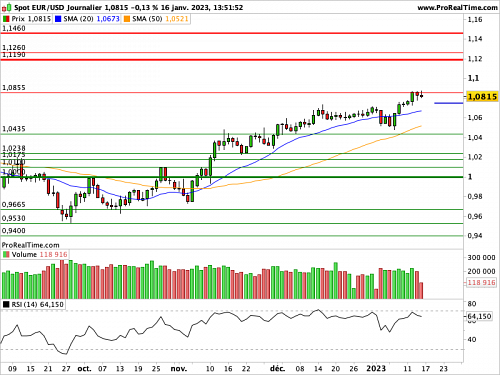 EUR/USD: Easy digestion of US inflation

(News Bulletin 247) – Against a background of confirmation of risk appetite at the start of 2023, the Euro consolidated against the Dollar, near $1.0820, capitalizing on the feeling of relief caused during the week the last by a confirmed and significant slowdown in the rise in prices across the Atlantic.

As a reminder, the consumer price index in the United States, for the widest product base, came out perfectly within the target, at +6.5% on an annual basis.

“In the United States, inflation data and wage trends reinforce the hypothesis of a Fed rate hike limited to 25 basis points in February”, analyzes Jeanne Asseraf-Bitton BFT Investment Managers. “SMEs confirm that monetary tightening is starting to bite, testify to a lesser shortage of labor and a marked easing of prices.”

The confirmation is that of a marked slowdown in the rise in prices on the other side of the Atlantic, even if the road to a landing in inflation will still be long. The fight, through a firm monetary policy, will clearly have to continue.

“The market remains confident that the Fed will not raise rates as much as it indicated in the December projections. Fewer rate hikes create favorable market dynamics for risk (equities, credit and duration included) against a drop in the dollar”, says Axel Botte, International Strategist at OSTRUM AM. “However, it cannot be ruled out that the reopening of China will induce an early rebound in oil prices. The improvement in the outlook is already visible in industrial metal prices. In this case, market expectations would reconverge towards the levels indicated by the FOMC…”, warns the strategist.

Note the closure of Wall Street on Monday, due to a holiday: Commemoration of the birth of Martin Luther King. To view all Wall Street holidays, go here.

No major macroeconomic figures are on the agenda today. It will become denser tomorrow with the German ZEW and the NY Fed manufacturing index (index Empire State).

At midday on the foreign exchange market, the Euro was trading against $1.0820 around.

The break of the 20-day moving average (in dark blue), which has served us up to now as a perfectly materialized trailing stop, requires cutting long positions, pending a relevant entry point. . However, no pronounced bearish reversal pattern has been identified. Conversely, only a crossing into a volatility high of $1.0750 would validate a bullish extension at this stage. This crossing is effective in value, but without volatility. Moreover, the RSI/price divergence is a concern at this stage. Neutral opinion reiterated under these conditions.

We will maintain this neutral opinion as long as the Euro Dollar (EURUSD) parity prices are positioned between the support at 1.0435 USD and the resistance at 1.0855 USD.

Facebook
Twitter
Pinterest
WhatsApp
Previous article
The workers in the municipalities of the whole country will go on a 24-hour nationwide strike tomorrow
Next article
Karditsa: The death of the 20-year-old football player from an ischemic episode