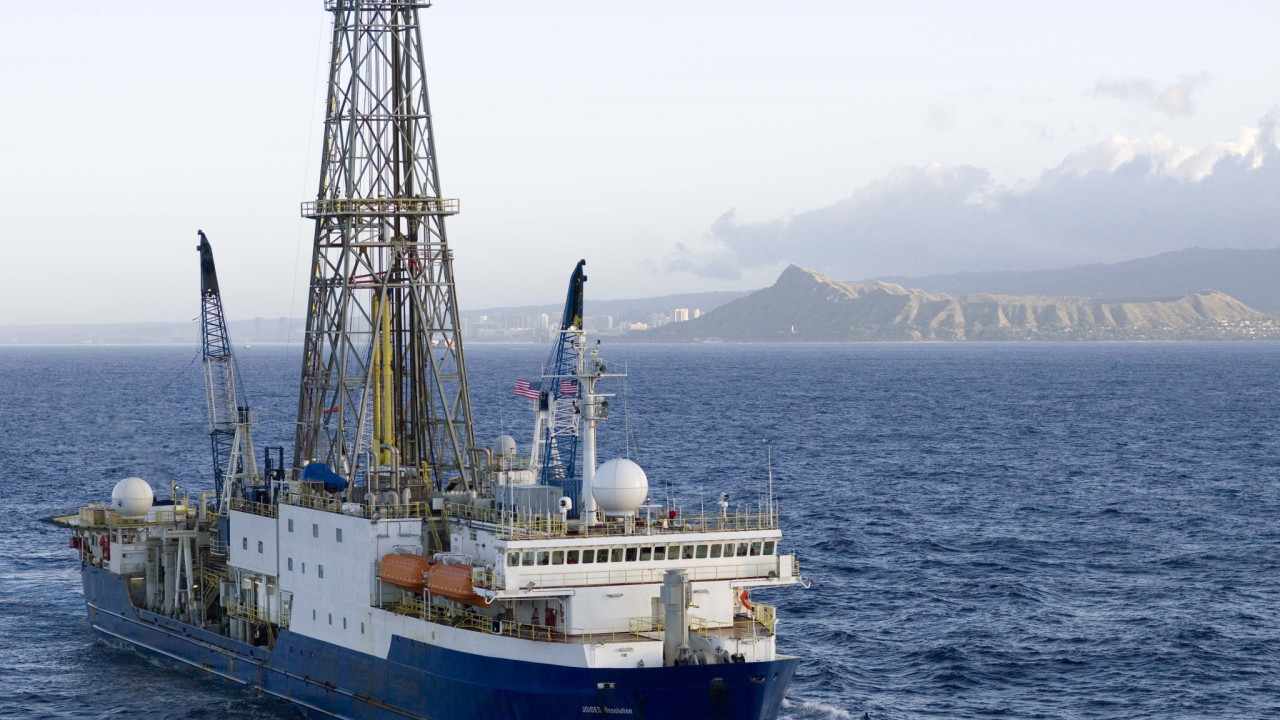 Offshore drilling begins around the volcanoes of Santorini

The ship will start from Spain, study the volcanoes around Santorini and end up in Crete. 28 scientists from nine countries will be on board, as well as many technicians and engineers. Three women will participate in the international oceanographic mission from the Greek side

The program and goals of the important oceanographic mission of the US research vessel “JOIDES Resolution”, which will carry out marine drilling around Santorini from mid-December 2022 to mid-February 2023, was presented by foreign and Greek scientists at yesterday’s “hybrid” (live and online) event of the Department of Geology and Geoenvironment of the EKPA .

The objective of the drilling is reconstruction of the geological history of the volcanic complex of Christians, Santorini and Columbus, collecting sediment cores through the sediments and volcanic layers of the sea floor. The “IODP expedition 398” is part of the International Ocean Discovery Program (IODP).

Drilling is planned at six key locations (12 have been identified alternatively), in water depths of 300 to 700 meters and at a depth of 230 to 860 meters below the seabed. The ship will start from Spain, study the volcanoes around Santorini and end up in Crete. 28 scientists from nine countries will be on board, as well as many technicians and engineers. Three women scientists will participate in the international oceanographic mission from the Greek side: Associate Professor Paraskevi Nomiko (Department of Geology and Geoenvironment, Greek Academy of Sciences), dr. Olga Koukousioura (Department of Geology, AUTH) and the researcher Paraskevi Polymenakou (ITHAVBYK Institute of ELKETHE).

According to Mrs. Nomikou, “the structure of the active tectonic zone Christiana-Santorini-Kolumbo runs through the islands of Santorini-Amorgos in a length of more than 140 kilometers and includes the volcanic centers of Christiana, Santorini and Kolumbo, which are ideal natural laboratories for the study of the interaction of volcanism and tectonics. These volcanoes are located within a 100 km long sea basin, where mud and volcanic materials have been accumulating for about four million years, which provides a rich record of the history of these volcanoes. The record of past explosive eruptions provides information on their frequency, sizes and intensities, as well as marine geology. It also includes a number of active faults that have produced large earthquakes, such as the maximum 7.5 Richter earthquake of 1956 in Amorgos. The research team, studying the geophysical data they had, chose the appropriate positions of the research drillings and when the cores collected will be analyzed, the volcanic risk of the area will be understood. The new quest Exp. 398 will extend this quantitative information to the whole area of ​​the Hellenic volcanic arc”.

The importance of the mission – as well as the Greek contribution to it – for the collection of more and vital data about the volcanoes of the region were emphasized in their greetings by the chair of the Geology Department of the Greek National Academy of Sciences, Professor Asimina Antonarakou, the professor emeritus of Geology of the Greek National Academy of Sciences Dimitris Papanikolaou (retd. of the pioneers of the implementation of the mission for years) and the president of the Hellenic Geological Society Athanasios Ganas. Mrs. Nomikou emphasized that during the mission there will be absolute transparency and timely information on the findings, as daily reports will be prepared for the Greek authorities and the public.

Lead Professor of Volcanology Tim Druitt of France’s University of Clermont-Auvergne emphasized that there are more than 1,000 potential active volcanoes in the world and 800 million people live within 100 km of an active volcano. “That’s why,” he said, “it’s very important to understand what triggers a volcano and what we can learn from their behavior in the past, as well as the potential threats of a potential eruption in the future.” As a typical example of a violent volcanic eruption, he cited the eruption in the Tonga Islands last January, one of the most violent ever recorded, where the volcanic plume reached a height of 35 km in the atmosphere, while the recorded wave pulses appeared to make repeating cycles around the Earth. “Volcanologists have realized that there is still a lot we don’t understand about these types of eruptions,” he said.

Druitt pointed out that “Santorini is one of the most explosive volcanoes in the world. Each of the layers visible on the caldera slopes was formed during a previous eruption of the volcano, some of which were particularly violent. The volcanic history of Santorini, as recorded in its rocks on land, has been studied in great detail by scientists. However, this record is incomplete, and it is time to move into the marine space, where the preservation of the volcanic record is likely to be much more complete. It will also allow us to interpret volcanic events up to millions of years ago. And let’s not forget this: investigating past volcanic activity gives us information about what we can expect in a possible future activity.”

On the other nearby undersea volcano, Kolumbo, he said it “definitely poses a big threat to Santorini in the future and we need to understand a lot more about its eruption history.”

Two boreholes inside the caldera

The expedition will drill at two locations within the Santorini caldera. Druitt said that “drilling into the caldera will be done under special conditions so that biologists can sample and characterize any microbes that live in the rocks deep inside the caldera. We already know that there are microbial colonies on the caldera floor, and we will be able to study what happens to these life forms as they are buried by repeated volcanic eruptions up to 360 meters below the sea floor.”

He also underlined that “of course we will publish our results, which will be accessible to scientists, the public and the authorities. However, we will not deal with archaeological issues, nor will we carry out work that has commercial applications, nor will we search for hydrocarbons. There is no reason to worry if drilling could cause an explosion, as the magma beneath the caldera is much deeper than we are drilling. In addition, the drill hole is very narrow, so it could not cause an earthquake. In addition, our plans have been rigorously reviewed by IODP security experts with extensive experience in these matters.”

According to Dr. Carol Cotterill of Columbia University’s Lamont-Dohert Geoobservatory, responsible for outreach at IODP, the mission has enormous outreach potential, as Santorini is an iconic site for both volcanology and archaeology, attracting millions of tourists each year. time. There will be two mission monitors: one on board and one ashore. Publicity actions on social media, blogs and websites, nationally and internationally, will be continuous during the mission.

Dr. Steffen Kouteroff of Germany’s Helmholz GEOMAR Center for Oceanographic Research said the offshore research drilling vessel JOIDES Resolution or “JR” is 143 meters long and 21 meters wide, while its 62-meter-high drilling crane is the highest point of the vessel. ship. With its crane, JR can drill up to 2 km below the seabed in oceans up to 6 km deep. He and Thomas Ronge of Texas A&M University in the US assured that while drilling in Aegean, all necessary measures will be taken to protect the environment and marine life.

From November 21 to 25 (hours 09:00 – 17:00) the periodical exhibition “Looking for the secrets of the Earth” is open at the Museum of Paleontology of the Department of Geology and Geoenvironment of EKPA in the Zografou Campus. It’s an educational interactive exhibit for all ages that shows how marine research drilling can be used to solve Earth’s geological mysteries. The report, which was first presented in Santorini, will include information specifically about the expedition around the island this winter.