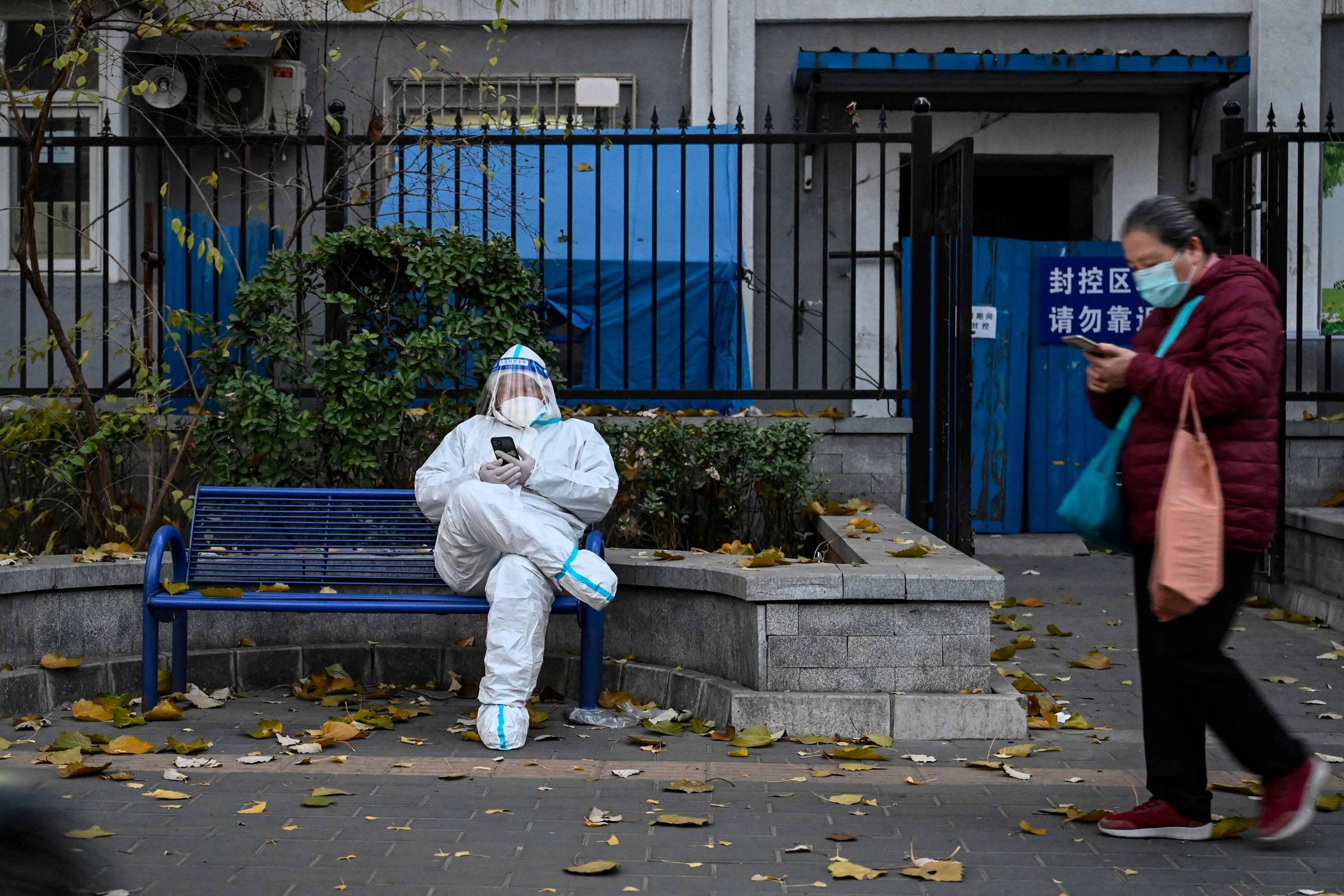 Aware that it may not be able to contain the economic effects of the Covid-zero policy, which is showing increasingly consolidated signs of exhaustion, China is starting to explore new ways of easing restrictions.

If before the Communist Party congress that gave leader Xi Jinping an unprecedented third term, the narrative sought to show that the country had overcome the disease, now the propaganda machine has been instructed, for example, to explain that omicron and its new subvariants are far less lethal than the original strain detected in Wuhan in late 2019.

The strategy is discussed at a time when China is witnessing a new strong wave of cases, with a record 31,656 infections recorded on Wednesday (23). In cities like the capital, Beijing, there are successive peaks in diagnoses, and since the weekend the first deaths from the disease in six months have been announced, albeit punctually – this Wednesday, there was one, bringing the total to 5,232 since the beginning of the pandemic.

In this scenario seen as critical, in which even field hospitals are being built again, discussions about immediate general flexibility sound out of place, at the risk of putting pressure on the health system —studies suggest that complete opening could result in demand for 5 .8 million ICU beds.

But, seeking to finance mass tests and discussing new quarantine and lockdown models, the country is struggling to minimize the economic impact of sanitary measures, in a year in which GDP growth should be below the target of 5.5%, already the highest down in decades.

THE Sheet spoke with official sources linked to the management of the pandemic, who asked to remain anonymous due to professional and political implications. They point to some anxiety for the coming months, with the regime expecting a difficult winter. There are fears of an explosion of cases in the Chinese New Year, on January 22 – the date is considered the biggest migratory phenomenon in the world, with millions of people moving to their cities of origin for the festivities.

But they report that the new discourse can already be seen in the coverage of the World Cup (in which China does not participate). State TVs have given special emphasis to crowds of fans without a mask in Qatar, reinforcing that the world is going through a “post-Covid” period.

Li Shulei’s appointment as Minister of Propaganda, therefore, is not by chance: he is known to have been very active on Weibo (a kind of local Twitter), where he occasionally openly criticized public policies. Li was now instructed to reduce information control and allow Internet users to question, to some extent, local policies for managing the pandemic.

The future prime minister, Li Qiang, will also be a key player. The selection of the former party general secretary in Shanghai has come as a surprise to analysts, given the disastrous way in which the city handled an outbreak between March and April. An interlocutor, however, says that a punishment that came to be speculated did not happen because Li received orders from the regime to try to make things more flexible.

The Center for Disease Control in Shanghai, in particular, would have been urged to only initiate a full lockdown in extreme cases — with multiple deaths a day and hospital resources running out. The strategy backfired, but as the guidance came from above, he was spared. Now his task will be to coordinate the economic recovery, using Shanghai’s mistakes as an example of what not to do.

The guideline is that now closures are localized, in residential blocks or districts, instead of entire large metropolises. Mass tests, carried out religiously in the main cities between April and August, have been reduced in several parts of the country, and the quarantine period for those arriving from abroad has gone from two weeks to eight days (five in a closed hotel and three at home). .

According to the authorities consulted by the report, local leaders had been instructed to control the disease at any cost before the CP congress, in October. As a result, several provincial and municipal governments had to borrow to subsidize PCR tests, isolation centers and wages. Now, the scenario is different and the strategy has become financially unsustainable. Even in Beijing, the health budget would be exhausted, with tests being financed by an emergency fund.

The silver bullet in the containment of cases that the regime counts on are the inhalable vaccines from the biopharmaceutical CanSino. According to interlocutors, the new generation of vaccines is much more effective than the traditional vaccines used today and have been successfully tested in recent outbreaks in Tibet and the Xinjiang region.

A challenge to be overcome, however, is manufacturing that is considered complicated and slow, since the new vaccine is not compatible with the production lines already in place. Availability is also still limited – only for those who missed the third booster dose in Beijing and Shanghai.

Although discussions about a possible reopening of the country are on the table of regime officials, those who live in China are not so confident about it. Researcher at Fudan University in Shanghai, Professor Karin Vazquez says she has been listening to these rumors for three years – and no longer believes in short-term changes.

In early November, she participated in the CIIE, one of the main Chinese import fairs, traditionally attended by big businessmen and officials of the regime. There, she heard more about plans to sustain the economic impact of Covid zero than to end politics.

“The government has been talking about ‘high-level economic opening’, prioritizing sustainable growth with investments in high technology and domestic consumption, replacing the export-oriented model that prevailed in recent years”, reports Vazquez, saying he perceives a consensus around growth smaller in the short and medium term.

She points out that this year’s event was quite different from last year’s. If in 2021 the regime was confident in the resilience of the economy in the face of foreign pressure for companies to leave the country, now 29% of the companies interviewed reported a drop in profit expectations and 10% to 15% of multinationals left China for to Southeast Asia or their countries of origin.

“Many had difficulties in renewing visas for expatriate employees, in addition to greater pressure to hire local labor,” he says. “We also saw a series of companies that managed to renew licenses to remain in operation. Several local enterprises went bankrupt, unable to deal with the economic difficulties and with almost no government incentive.”

In this scenario, sectors such as services and manufacturing were the most affected.

Pandemic management is also a concern on a personal level. Project manager Eduarda Tamires Santos graduated from a Chinese university in June and decided to move to Guangzhou, in the south, which is currently experiencing one of the country’s biggest Covid outbreaks. She was locked in the building where she lives for three days after the discovery of a positive case in the neighborhood and is now dealing with the closure of the entire Haizhu district.

Struggling to renew her residence visa and unable to work in person, Santos says that coexistence between foreigners and Chinese in the building has become more complicated in recent weeks. Although the locals, according to her, are reluctant to participate in the mandatory tests, it is the foreigners who are most charged for “more responsibility” in relation to Covid. With that, she plans to leave China as early as next year.

“Dealing with these restrictions for such a long time weighs a lot. It is very difficult to live with mobility restrictions, it is extremely stressful to worry all the time if you caught or had contact with someone infected with the virus – or what can happen to you if you end up in a centralized quarantine.”